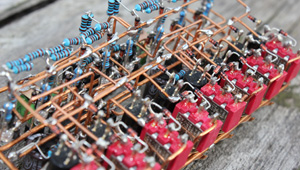 NATHAN THOMPSON, exploring the relationship between man and robots 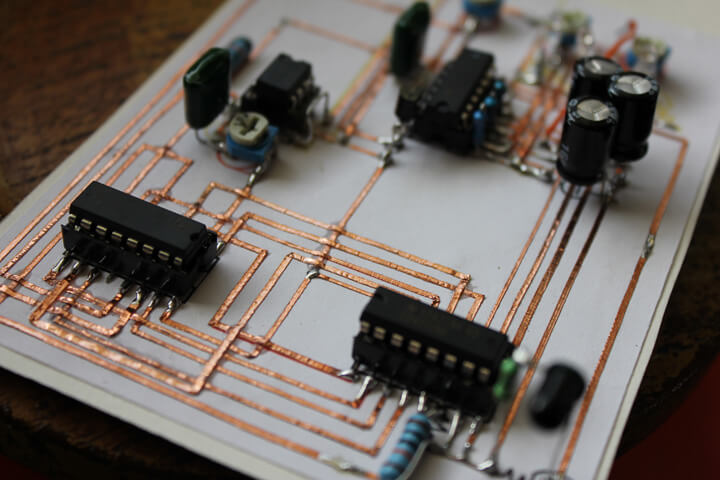 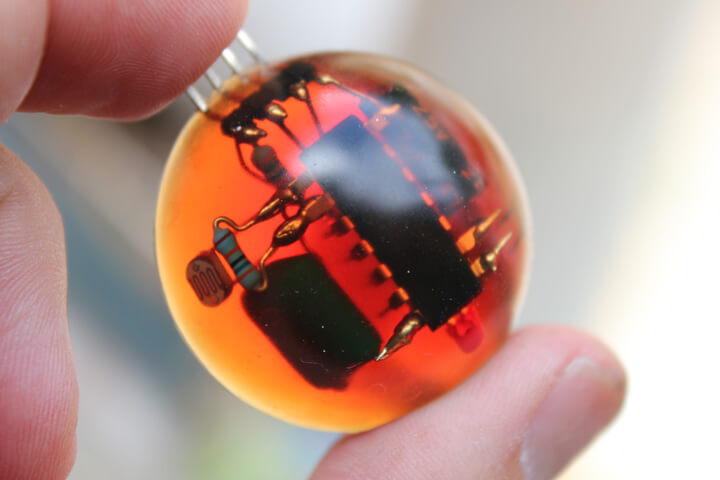 One of the most exciting moments as a cell biologist probably is when, for the first time, you see through the microscope lenses, cardiac or smooth muscle cells twitching autonomously in your cell culture. I shared that same excitement when exchanging e-mails for this interview with Nathan John Thompson, a multi-disciplinary artist exploring the relationship and interactions between man and machine/robots. As an artist he explores new possibilities that blur the edges of these relationships. At the same time, his work raises reflection and concern when these ideas are challenged: mechanical sentience, human awareness?

Thompson is an artist that builds his own machines, which are analogue systems but that posses a human-like behaviour. He usually uses custom electronic neural-type networks, very simple, but when they are multiplied and able to feedback, they  display quite an organic reaction, apparently showing potentially truly independent thought.

At the moment he is developing a project on Soft Robotics at SymbioticA, where he is Artist in Residence, exploring new stem cell technologies (using Induced Pluripotent Stem cells (IPSc)) by studying the autonomous qualities of human cardiac cells. It was at SymbioticA where he met Guy Ben-Ary, the artist behind cellF, a project that built the first neural synthesizer (read more here). Being a close friend of Andrew Fitch (cellF’s Synth designer) it was about time he jumped in the developing project. Nathan designed and constructed the “sculptural object” that includes the Bio-lab as well as the electronics. The sculptural object was inspired by the noise machines of the futurist Russolo (early 1900’s). He also built the “FriGate module” a module that allows to control and manage the stimulations that are sent to the neurons via the electrode. More recently he’s presented Gen-Ottonix and Solar beams for Liquid Architecture 2016, another piece of work that uses machines to explore the limits of consciousness and inanimate ontology.
Nathan Thompson’s artistic explorations delve in unknown territories to understand the future of humanness and the limits of cognition.

You are a multi-disciplinary artist exploring the possibilities of man/machine interaction working with electronics, mechanics… When and how did the fascination with them come about?

I grew up in a rural environment, out of necessity everything had to be fixed, modified and “hacked” to perform specific or multiple tasks basically because we had no access to alternatives. My very earliest memories are alongside my parents’ working on equipment of all sorts – so you could say I’ve always had the fascination. I remember being frustrated as a child that the objects around me didn’t function the way I wanted and that they seemed closed in a cross communicative way, in order for these objects to speak my language I had to open them up and

change their internal orientations, I learnt a lot about basic mechatronics. While I was studying Industrial Design in the 90s I found myself continually pushing back against this culture of closed/proprietary systems and wanted interfaces to entangle connections with the real world in a non-translational way, the world to me wasn’t binary so the media that represents it must also be fluid. These interests have forced me to work within many disciplines and have actually been the very reasons why I’ve always been a fringe dweller.

What brought your interest to cellF and to collaborate with Guy Ben-Ary?

My investigations into analogue robotics brought me closer towards the realm of biological systems and I found myself in geographically close proximity to people that were travelling in similar directions. By some weird uncanny alignment, the cellF team formed with these people and here we are.

I was aware of Guy’s work through attending the fantastic SymbioticA Friday’s talks and Andrew Fitch (cellF’s Synth designer) is a close friend/teacher so I jumped at the chance to work with both them.

cellF is the one of the only interfaces where humans can have a direct, untainted connection to the semi-living. My particular interest lies in the intricacies and chaos inherent in this transaction, the path back and forth is free from any render, it’s an open wire down which we can observe and question many things about our physical inhabitancy. I don’t believe that, as a species, we will discover much about ourselves if we continue to use tools that shape and translate the information we seek, there needs to be a closer connection to it… Perhaps the timescale for understanding it is unachievable but the data at least will be real.

What were the biggest challenges you faced for cellF?

The biggest challenge has been, and still remains to be, harnessing the sheer amount of activity going on at the cellular level. Also, initially Guy and I spent countless months on the design of the physical object, it was difficult to find something that spoke to us correctly… but I think we succeeded.

As the project has progressed I’ve found myself more involved with unshackling the potentials of this beast we have created. I really enjoy the flow from neuron to eardrum and the surprising emergence of new information when that feedback loop is completed, often I lose sleep over it but deep down this project gives me a lot of satisfaction.

Im currently devoting my time to exploring Stem cell technologies (including Induced Pluripotent Stem cell technology or IPSc) for a new work I’m developing that is based around the concepts of soft-robotics. It is still in the very early stages of development but I’m interested in and experimenting with the inherent, autonomous qualities of human cardiac cells – they twitch spontaneously in-vitro and don’t require external control to produce effective actuation.

I’ve been able to, just yesterday for the first time, visibly see the cells I’ve cultured twitching in a petri dish and I see great potential in developing protocols that will allow me to understand their twitch phenotype. I’m planning to try and grow them in/on a scaffolds of varying density and investigate motility where organic materials such as silk can be infused with the cells to create an automaton unmistakably apart from the hard edged structures usually associated with kinetics. In many ways this is just an extension of what I’ve always been interested in… After spending 15 years on discrete circuit based robotic work it’s a logical step to explore possibilities in biological movement, it is the real analogue after all;)

Time and reflection. The ability to take risks and make mistakes free from time constraints is the most important thing to me.