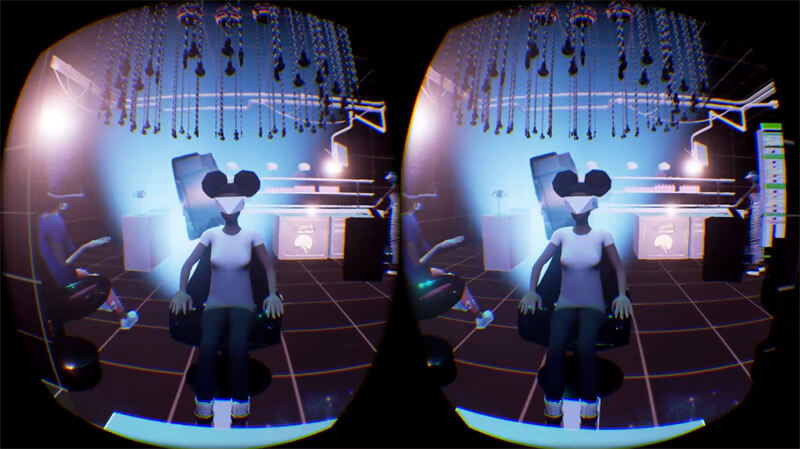 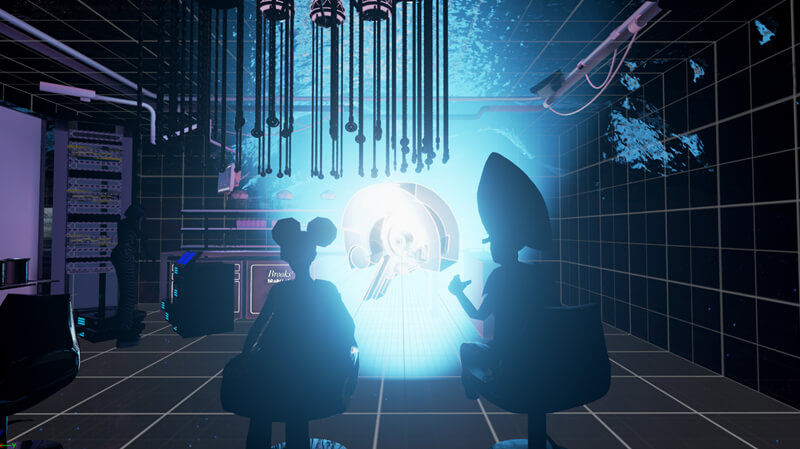 Last year the National Center for Women and Information Technology presented a report on the gender divide within technology. It revealed that the number of women in computing positions has been in a steady decline since its all-time high in 1991. In the report, it was also shown that in 2015 only 25% of computing roles were held by women*. Of that number, only a third were occupied by women of colour. How do we begin to approach such deep divides in gender and race within technology? One company seeking to answer such questions is global collective Hyphen-labs; an initiative which questions and challenges both the gender divide as well as the lack of representation for Black, Latina and Middle-Eastern women in the tech field.

Founded in 2014 by experienced designer Carmen Aguilar y Wedge and architect Ece Tankal – who both share the role of creative director with speculative neuroscientist Ashley Baccus – Hyphen-labs has brought together an international network of women of colour with an impressive array of backgrounds, ranging from scientists to architects, engineers and artists. It is an interaction studio, which not only operates as a space for artistic and scientific creativity but also produces top quality commercial work. It provides services in the form of digital design, prototyping physical computing, teaching, data visualisation, post-production, graphics and web design, cinematography, animation and digital fabrication.

One project of Hyphen-labs which highlights the unique salmagundi of human-centred design, progressive politics and cutting-edge technology, encompasses the art installation NeuroSpeculative AfroFeminism. It fuses experience design, virtual reality and production design. In 2016 it was staged at the Sundance Film Festival, where it triangulated research done by the studio (primarily into how Virtual Reality technology can combat racial prejudice) with more straightforward interactive tech art components. Firstly, it presented speculative products that manifest the neglect manufacturers and service providers show towards the needs and realities of Black, Latina and Middle-Eastern women today. It, for instance, imagined sunblock that easily blends with all skin tones (something which suncream often fails to do currently) as well as jewellery, conceived in collaboration with artist Michelle Cortese, that would help protect women of colour from the violence they face from police by having sound and video recording capabilities.

The project NeuroSpeculative AfroFeminism invites the viewer into a futuristic neuro cosmetology lab, where it blends the locale and narrative of the beauty salon (titled Brooks’ Salon after African-American poet Gwendolyn Brooks) with science fiction. Byway of so-called transcranial extensions (known at Octavia Electrodes, in reference to author Octavia Butler) and an Oculus Rift VR set, the audience is invited into a digital environment, where  the restrictive and reducing narratives currently set for women of colour can be explored and expanded; hopefully even re-written, so that we may be able to imagine a more utopian future. 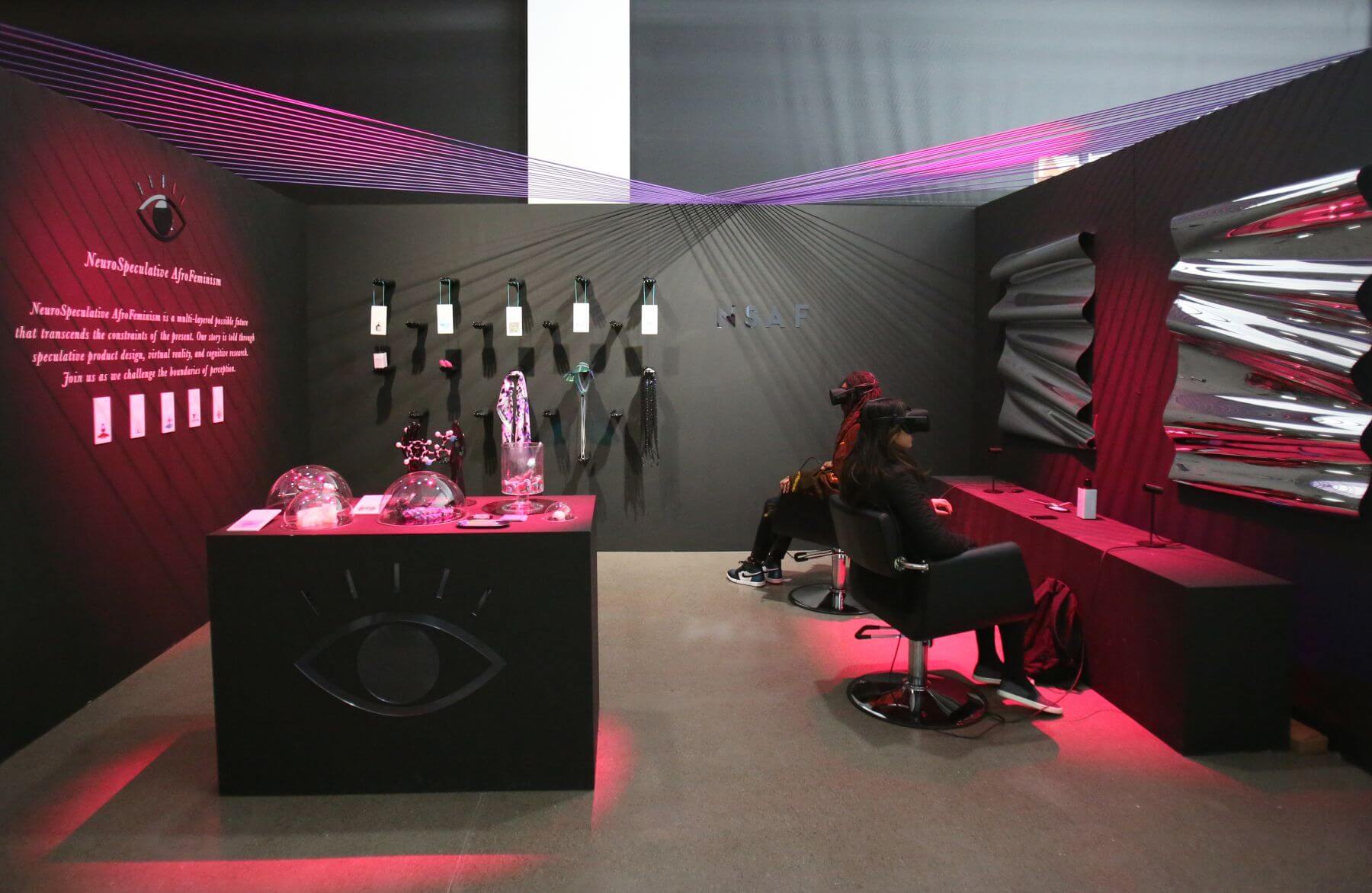 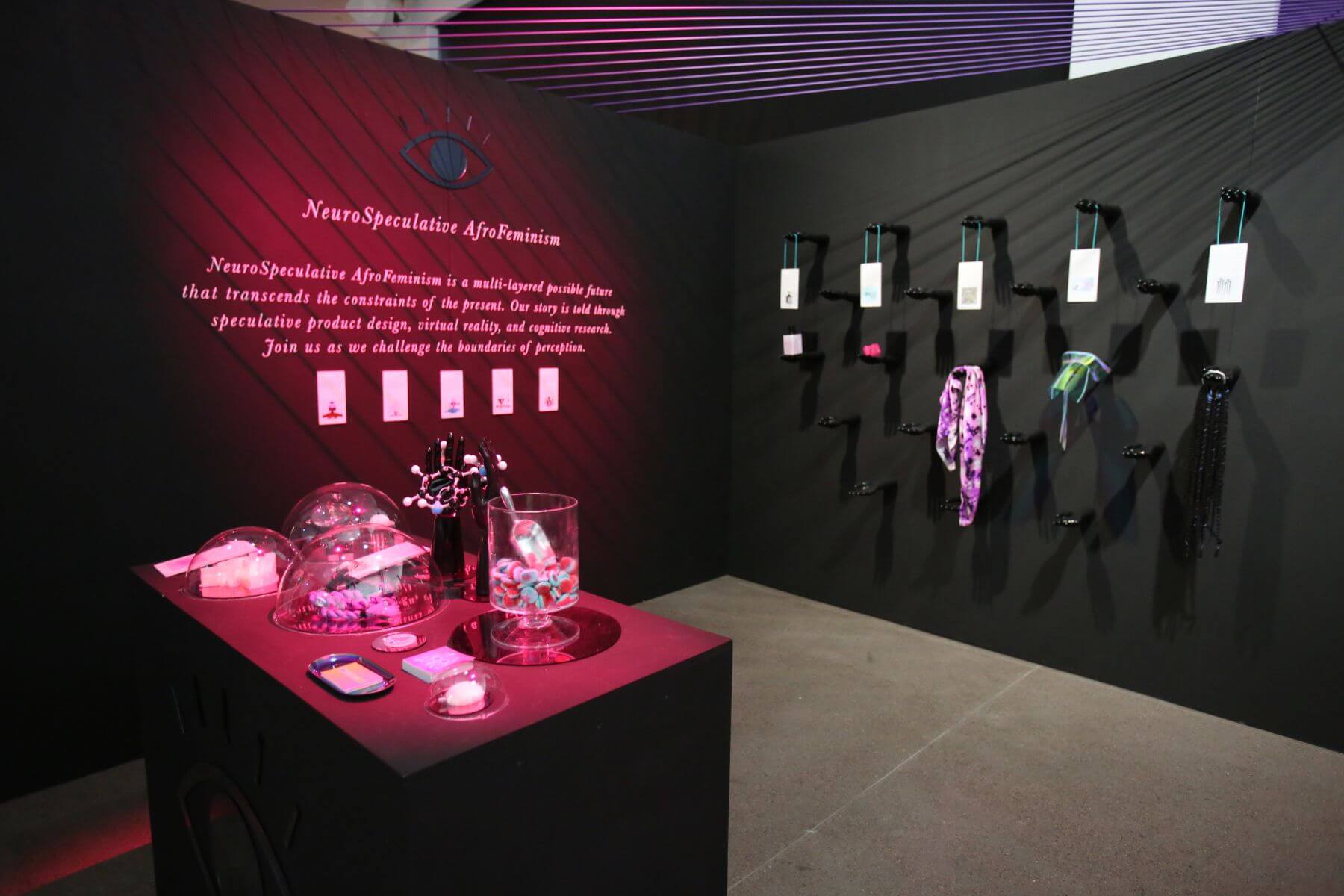 Hyphen-Labs’ interests lie at the intersection of technology, art, science and the future of gender and race. How and when did these interests come about?

We’re a global collective using our broad experiences and cultural perspectives to make meaningful work. Before Hyphen-Labs, we were all working in fields that lacked gender and cultural diversity: science, engineering, and architecture. We didn’t have access to people who could understand the challenges we faced in these environments. When we talk about unequal pay, micro/macro aggressions in the workplace, surveillance, and a number of other issues “othered communities” mostly, of colour–particularly women of colour–face on a day-to-day basis, there is a level of understanding that comes with people who have also been in the same position. We saw very few Black, Latina, or Middle-Eastern women in our respective fields and we wanted to make a project that not only questioned why this was the case, but that ignited people to do something about it. We’ve known each other for a long time. Ashley and Carmen went to Undergrad together in Santa Cruz for a few years and Carmen and Ece met in their Master’s program in Barcelona. Carmen and Ece founded Hyphen-Labs after they finished their degree because they wanted to create a space for women to create and feel empowered to do important work no matter their background or geolocation.

Your latest project NeuroSpeculative AfroFeminism (NSAF) is a digital narrative that sits at the crossing of product design, virtual reality, and neuroscience and was inspired by the lack of multidimensional representations of black women in technology. Could you tell us about the intellectual process behind it?

The intellectual process for NSAF was one of collaboration and curiosity. We wanted to make something that allowed us to study a black womanist history across many different genres. We were inspired by everything from literature, philosophy, classical to digital art, science, futurism, engineering etc. As technologists, we are always imagining how we would be using the emerging technologies that are being offered.  How would a driverless car fit the use case of us and our families?  People from our communities are often considered ‘edge cases’ but as early adopters and active users across all technology platforms, that design thinking has to change.  We used NSAF as an exercise in designing for ourselves and “the others.” One approach is creating objects that could subvert or troll technology, another is looking at existing products and modifying them in order to fit culturally specific aspects of the community.

Which has been your most challenging project so far and why?

Definitely NSAF. Our timeline was around 4 months from production to exhibition, we had zero budget until 2 weeks before exhibition…and we’re talking about the combination of technology, synaptic plasticity, equality and equity through brain optimization and decreasing prejudice and bias through VR.

We faced challenges fundraising and were often told that we were being too ambitious.  Once we pulled it all off, people asked us, “who did this for you?” Despite these challenges, with each and every project we try to adopt a new medium always challenging and pushing our creativity. This was our first time working in virtual reality. We had to ask many people for help throughout this project because a lot of what we had to do was outside of our comfort zone.

Hyphen-Labs also provides services like digital design, data visualization, digital fabrication, physical computing and production… How do you balance your more creative projects alongside the commissioned ones? And is the intellectual process behind the two similar?

We approach all projects with the same care and curiosity that we bring to our self-directed projects. Understanding that we have to take on commercial projects to sustain the studio is part of what pushes us to always deliver our best work so we can continue to win commissions from companies who actually pay artists.

We’ve been fortunate enough to work on projects we believe in and that resonates with our core values by being intentional in the work we put out into the world. Our global approach is fundamental in the way we augment projects and integral to our design process. The only difference in the intellectual process for both types of projects is that we are synthesizing information in commissioned projects, in creative projects we can be more experimental in our approach because we don’t have to think about stakeholders outside of our company.

What direction do you see your work taking?

Continuing to bridge the physical and digital. Tying narrative and storytelling into all of our projects go give the meaning, teach a lesson, allow for further contemplation and education. Playing with light and scale. Using data and scientific experimentation to push the meaning of our work.  We have our own style, language, and methods of communication (visually, verbally, and written).  We see our work expanding into different disciplines while maintaining our identity as Hyphen-Labs.  We see our work developing through commissioned and self-driven pieces that give us the freedom to express ourselves.

Monotony in daily life, days without breakfast, long periods of time without weekends or nature. A Heavy political climate that keeps us trapped within our own countries or lead us to misunderstand others.

Not being able to prioritize the deep work it takes to learn new skills and accomplish big goals. Systems of oppression. Fear. Routine. 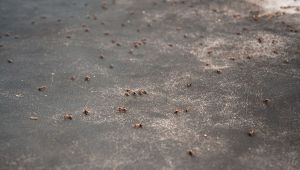