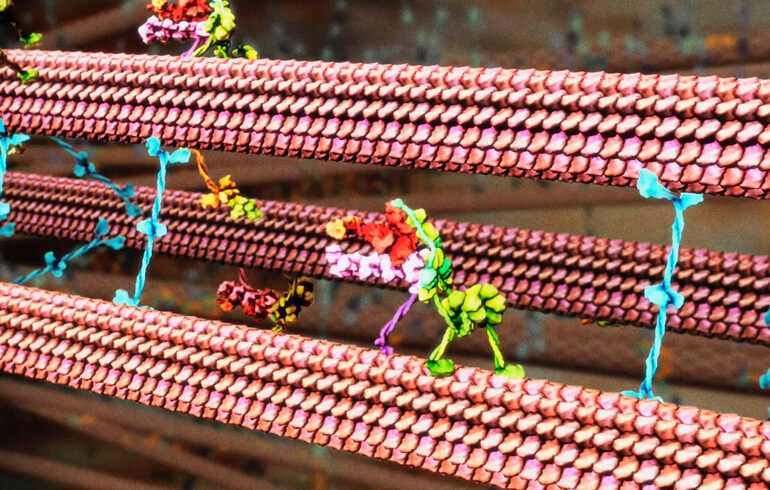 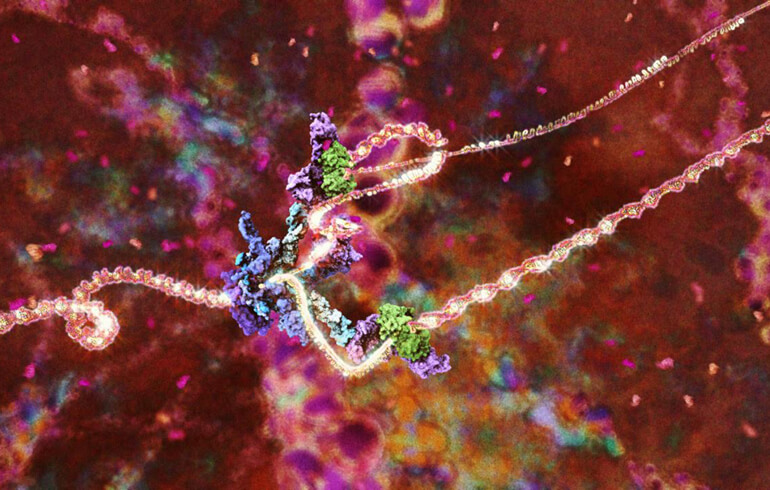 Molecular and cell biology are disciplines that seek to understand biological processes at molecular and cellular levels. When it comes to explaining these mechanisms, however, researchers find it difficult to show what happens in living cells on such a minuscule scale.

Starting from pictures and drawings, animator Drew Barry addresses this challenge by using computer graphics to depict the intriguing molecular mechanisms that take place constantly in our cells. Berry’s training in cell biology and microscopy, as well as his enthusiasm for the graphics of video games and demos, converged in the meaningful mission of illustrating and animating biological phenomena. For more than 20 years, he has created numerous animations that are not only pleasing in their visual beauty but are also scientifically precise.

One of the most popular is Replication – a real-time visualization of a double helix of DNA being copied–, showing the complex replication machinery at work every time a cell divides. As a molecular biologist, my personal favorite, Chromosome and Kinetochore, shows dyneins and kinesins walking along the microtubule. The visualisation feels like one of the most endearing moments that takes place in molecular biology,  giving a clear sense of how the motor proteins move chromosomes during mitosis or cell division.

In addition to the biomedical animations, Berry directed the “Hollow” music video from Bjork’s album Biophilia – a work that has become his most artistic project. The video is a three-dimensional representation of the inner workings of Bjork’s insides, moving from the blood tissue into her DNA and how this, in turn, is replicated. His most recent work focuses on large-scale projections. One piece,  Virus: one million times, is a stunning ultra-high resolution display of different human viruses on the domed walls of a library reading room.

Berry’s work has been exhibited worldwide at the MOMA, the Guggenheim, and the Centre Pompidou among others. His animations provide researchers and the general public with a fascinating means of understanding both what we already know and learning about cellular and molecular biology. As Bjork said after collaborating with Berry, “he truly has brought magic to our insides and shows us that we don’t have to look far for the miracle of nature, it is right inside us”.

have to look far for the miracle of nature, it is right inside us”.

Your work is at the intersection of molecular biology and visual arts, when and how did the fascination with them come about?

I was part of the first generation to grow up with access to a personal computer. The most pivotal machine in my life was the Amiga 500 and the stunning computer graphics of video games and demoscene. I wasted way too many summers in front of a CRT monitor.

At school, I had great science teachers who made it easy to become fascinated with biology. At eighteen, I went to Melbourne University to become a marine scientist just like Jacques Cousteau and study sharks.

As part of the marine program, I had to take a course in cell biology, where I had my mind blown wide open by the

beauty of microscopic organisms, as presented by Prof Jeremy Pickett-Heaps. Jeremy had a darkened research lab with hulking microscopes, each focused on tiny drops of muddy green pond water. Jeremy’s time-lapse recordings of the microscopic worlds revealed for me the spectacular activity of living cells. From Jeremy, I learned how to operate various types of microscopes and interpret the images they generate. I was also taught how to navigate scientific literature and translate the language of science.

From foundations of computer graphics and cell biology, I have evolved to become a “biomedical animator”, which I believe is my final form.

What are your aims working between science and art? Do you think your work can bring science closer to a more lay audience (even further by collaborations with artists of the caliber of Björk)?

I would describe my work as being an impressionist molecular-landscape painter. My animations represent something we can’t directly see or experience but are founded upon 3D data and measurement from research labs. Everything I have ever created that resonated with large audiences came from projects where I had plenty of time for research and data gathering, and consequently were as accurate as I could reasonably make them with lots of scientific detail. Whenever possible, I try to let the science speak for itself and use real-time speeds to pace the shots and include as many layers of data as I can. I then go through a process of pruning out components that I feel are distracting or not supporting what the animation is trying to reveal.

All of science at microscopic and molecular scale requires visual manipulation to make it watchable and meaningful for an audience. For example, I spend a great deal of time playing with colour to see how it feels, but largely make choices based on simple rules, that I find work because we are warm blooded mammals: If it is alive and healthy it is pink; if it is dead it is cold and blue; if it is diseased or sick its yellows and greens. Colour changes how the audience responds to what they are looking at, and conveys a feeling for the stuff moving around on screen.

Sound design is 51% of what makes my animations come alive. It is subtle but powerful cue to the world you are looking at and makes the animations far more entertaining and engaging. Almost all of my animation soundscapes were created by my long-time friend and collaborator, Franc Tétaz, a Grammy-winning Australian sound designer and music producer. Franc has long understood my intent and we are both striving for productions with reach and impact. His sound design transforms my animations into a visceral experience, which makes the audience lean in and engage.

The scientific accuracy of your animations is impressive. What are the biggest challenges you face in your projects?

The primary tension in my work is speed of animation production vs research and development. Deadlines keep getting shorter coupled with an expectation that the visual quality exceeds anything that I have done before. What I used to achieve in months – detailed research, developing complex animation rigs, and iterations of art and design – I must now deliver in weeks.

The more time I spend on background research and development the better the content I can create, but the deadlines keep marching closer. My animation techniques have evolved to meet production speed demands, but I do miss the days of endlessly reading the literature and just ruminating over what I find there.

What directions do you imagine taking your work in? Are you considering taking your animations into Virtual reality set ups?

What I am currently working hard to make happen is large-format screen productions for Imax, planetarium domes and architectural building projections at festivals. Creating a giant screen spectacle is a great challenge that can reach huge new audiences around the world. My favorite outcome so far has been Virus: one billion times, a one-night-only architectural-projection artwork, created for the White Night Melbourne 2014 festival. The canvas I had to work with was inherently spectacular: a four-storey-high, octagonal room with a thirty- five-meter dome inside Melbourne’s State Library.

When I went to consider the room as a projection surface, its huge geometric neo-classical dome reminded me of the natural forms of viruses and their soccer-ball-shaped outer-coats. This got me thinking about scale: if the library’s thirty-five-meter dome was a virus, what magnification would it be? The common cold virus (Rhinovirus) is an unimaginably small thirty nanometers across. If Rhinovirus was enlarged to the scale of a thirty-meter dome, the magnification would be one billion times. So, I decided to create molecular structures to scale, at one billion times magnification, using scientific data from virus biology research.

The resulting artwork, Virus: one billion times, examined eight human virus in ultra-high resolution, atomic detail. Every two minutes, the room switched to a different human infection virus including herpes, influenza, HIV, polio and smallpox. Depending on the type of virus and the way it stores its genetic code, long snaking coils of DNA, or its more ancient cousin RNA, would wrap around the room like giant helical dragons. Further mutating the room into a genetic library, the bookshelves were illuminated with the genome code of each type of virus with scrolling text written in with the four letters that encodes all of life: G, A, C and T.

For added spectacle I applied intense saturated colours, with greens, blues and yellows suggestive of illness, toxins, or an alien world. I chose a colour palette for each virus that reflected how I felt about the disease it causes. The projection mapping onto the walls was accomplished by an events company using eighteen refrigerator-sized projectors, worth more than two million dollars. The illumination colour generated by those projectors was staggering, with the hue transformation for each virus dramatically shifting the emotional feel of the room. In equal measure to the visual show was the sound design. For each virus, Franc Tétaz created a unique soundscape, evoking a distinctive tonal mood that alternated between disquieting, strange, terrifying and wondrous. Working with the room’s huge acoustic space and four-second reverberant delay, Franc designed the score to play across an eight-channel system with the impact of a cathedral performance.

When the audience entered the room, they were immediately enveloped inside the twitchy Brownian world of molecules that clung to bookshelves and slid across walls with electrostatic activity. The work was met with a staggeringly positive public response. The room was at capacity the entire night, with a constant queue of people two city blocks long waiting to get into the library. By daybreak, twenty one thousand people had experienced the show. Film recording of Virus: one billion times

Creativity for me happens during long daily solo walks and not while I am working at a screen. I think the subconscious is responsible because it always whirring away in the background although ‘I’ am usually oblivious of the activity. During my walks I allow endless reflection on any research, design or technical problems that I am currently wrangling. Seemingly out of nowhere, wholly formed solutions and novel perspectives bubble up, presumably from the hidden part of the brain that is actually in charge just not steering the ship.