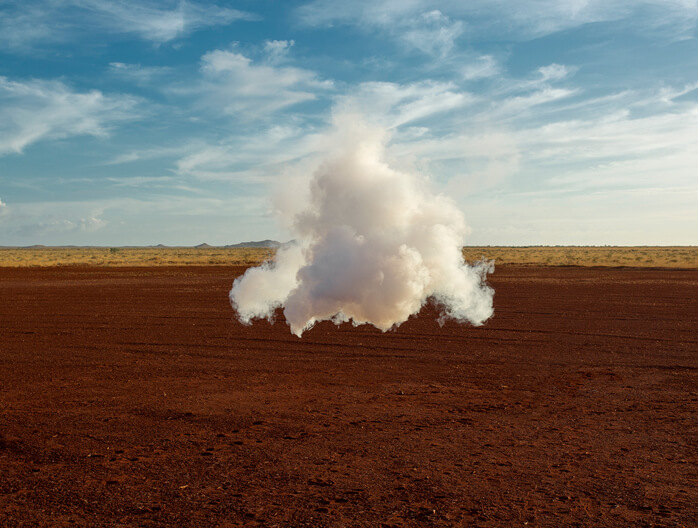 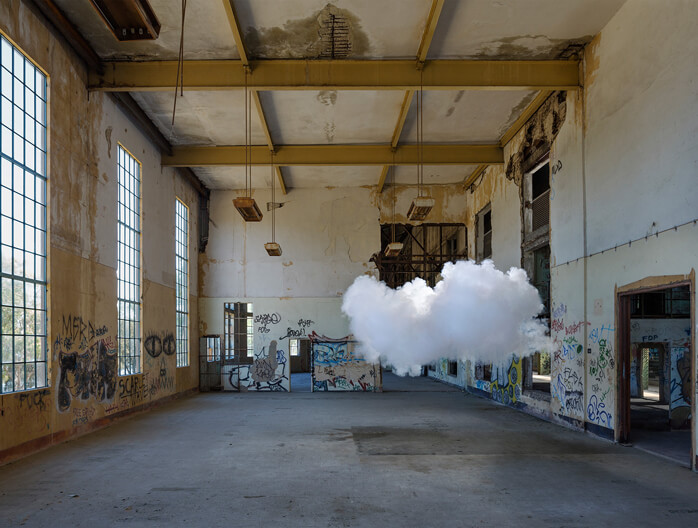 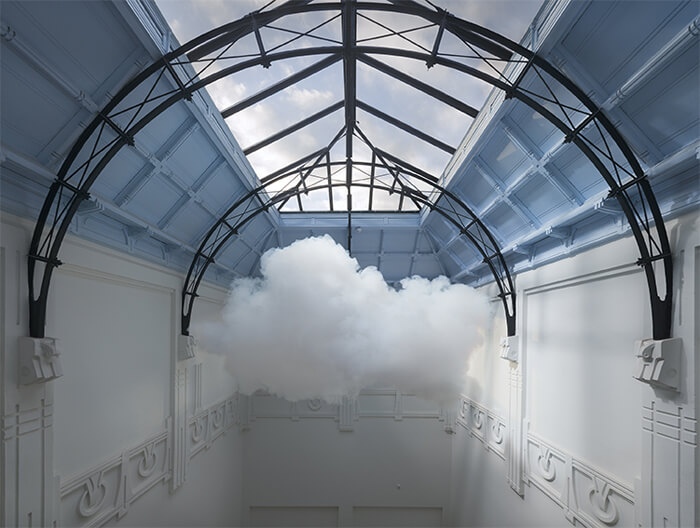 “Everything is temporary,” says Dutch artist Berndnaut Smilde, who uses the ephemeral nature of things as inspiration for his work. He makes perfect miniature clouds indoors that have been exhibited in many spaces and cities around the world. ‘They [the clouds] are apparitions: cultural connotations that are evoked by archetypes, conjuring up fantasies, desires, and memories.’ Smilde told us.

His Nimbus series is probably the most popular. In this project,  Smilde works with water vapour to create miniature clouds in a variety of spaces. The appearance of the clouds varies depending on the humidity, temperature and size of the location. All Smilde needs apart from the water vapour is a smoke machine and a room with no air circulation. The water particles stick to the smoke, giving rise to the short-lived miniature clouds which fall apart seconds after building up. The picture that Berndnaut Smilde takes of them is what persists. It is a document of something that happened at a specific time and location and no longer exists, and this human concern – the fact that everything is temporary – is what Smilde focuses the creative process on.

In a commissioned project, Iconoclouds (2013), Smilde photographed how four of the most iconic fashion designers faced the “elements”. Lagerfeld, Donatella Versace, Alber Elbaz, and Dolce & Gabbana posed for him with one of his miniature clouds. And they did it in historic building like InterContinental Paris Le Grand hotel, Palazzo Litta in Milan or Grand Palais in Paris where Chanel has staged runway shows since 2005. Another remarkable project that also touches on the ephemeral is Breaking Light. The project began in 2015 when Smilde built a prototype prism that enabled him to “break light” at large scale. The idea was to use this prism to refract light and project a rainbow onto the landscape.  Smilde managed to project these colour spectrums in various locations, including Colorado and Sao Paulo. He even used the lighting rhythm of Scheveningen Lighthouse in one occasion.

By creating these clouds and rainbows, Smilde explores light, atmosphere and the environment in regard to architectural elements and embraces the ephemeral and the immaterial in his own unique style. 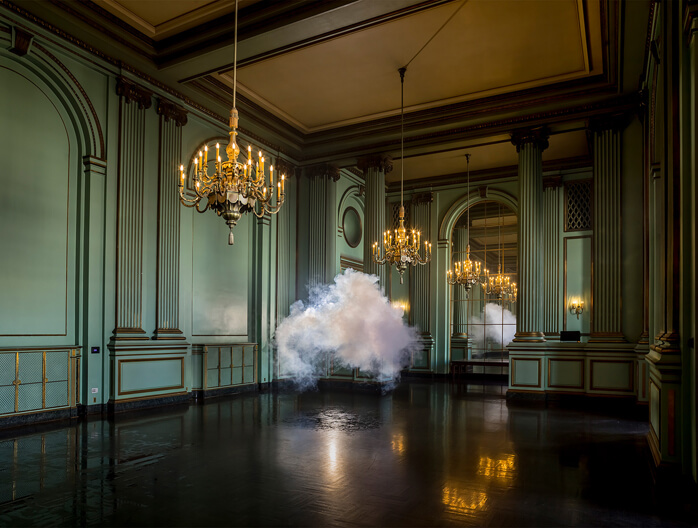 I use all means necessary to create an idea, even if it exists for just a few seconds. The water vapour functions as a tool for keeping the cloud together. The water-partials stick to the smoke and makes the cloud heavier. The small strings you see underneath the clouds is because of the water pulling it down. I like these details as it contributes to the suggestion of a weather situation. A cloud without the prospect of downpour is less disturbing.

The Nimbus series is a collection of ephemeral moments in the form of a cloud. You make clouds indoors that only last for ten seconds but rather than in the technical aspects you are interested in the temporary aspect of the work. Could you tell us the intellectual process behind these ephemeral clouds?

The clouds aren’t durable and fall apart the moment they grow. The work is captured in a photograph which functions as the document of something that took place in a specific location and is now gone. In a way we are re-living the moment in our minds again making the cloud more important in its absence then its presence. They are apparitions: cultural connotations that are evoked by archetypes, conjuring up fantasies, desires, and memories. Im interested in the idea of a cloud inside a space and the cultural references around these images. They contain romantic ideas, the sublime, and represent both the ideal and perishable.

But are we looking at nature? The cloud is man-made in a setting used for exposing culture, turning it into culture right away. So there is a transition. The cloud shifts from nature to culture, from appearance to representation, from physical fact to image, from present to absent. The work seems to exist of oppositions. Even in relation to the space itself you could see the uncontrollable aspect of the cloud as a visual counterpart to the order and structure of a room.

What are the biggest challenges you face for its development?

Finding other ways of experiencing the work, potentially maybe even a large scale live installation that would take up a lot of physical space so you’d be able to engage with the cloud in a room.

Recently I’ve been working with slow-motion videos in an installation where clouds would emerge out of the darkness and grow and dissolve again. Emerging from a void there was no reference to size of the cloud which worked quite interesting.

Eventually to come back to the subject of water, I always wanted to make work at sea. If this will be a ship or other platform I don’t know yet.

I couldn’t live without the feeling that things fall into place at some point.