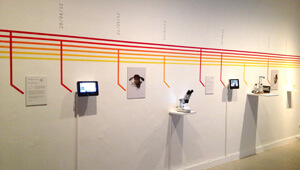 ANDY GRACIE, into the relationships between the arts and the sciences 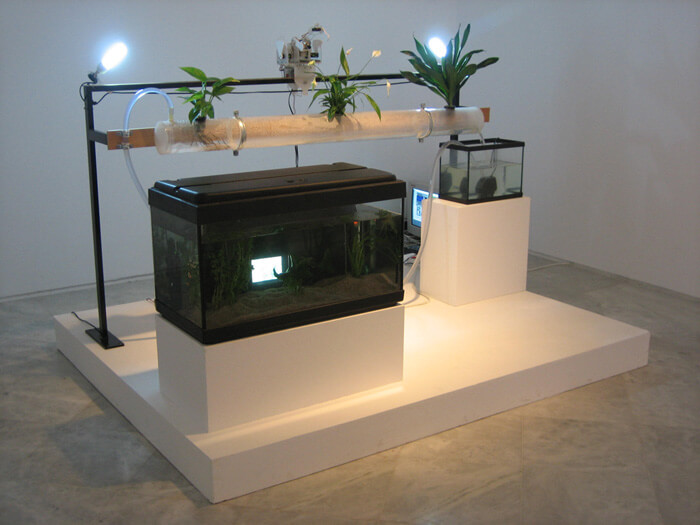 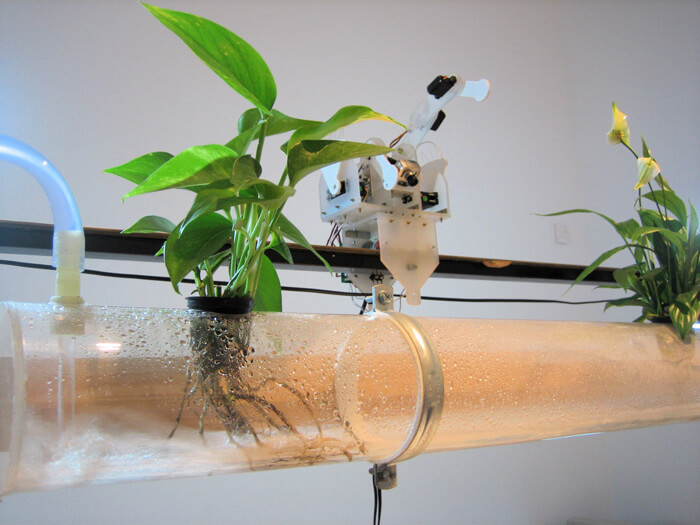 An experiment is a set of procedures performed to prove a theory but for visual artist Andy Gracie is not only an act of acquiring knowledge and information but also trying unknown or unexperienced processes. Andy Gracie builds technological systems that interact with natural living systems and live organisms. Fish, insects, bacteria or protozoa and robots, artificial intelligence and biological processes are part of his creative universe. The central axis of his conceptual framework lies at the heart of scientific methodologies and the notion of Unwelt -the world as is experienced by any organism-, a term established by biologist Jakob von Uexküll that later led to the semiotic theory developed by Thomas Seboek.

With NASA’s Juno spacecraft orbiting Jupiter since the 4th of July 2016, astrobiology and bioartifical life, and more specifically Gracie’s work is becoming a key topic rather than only a category in which include some artistic practices. For instance, Drosophila titanus (2011-ongoing) is a speculative art project with solid scientific approach through which Gracie explores future scenarios of how life form in space would be.

Bioartifical ecologies and interspecies relationships are explored in his previous work Autoinducer_Ph_1 (2006) and Fish, Plant, Rack (2004). Autoinducer_Ph_1 is a mechanic and complex ecosystem that taking advantage of traditional rice cultivations is built to examine organic and synthetic relationship. While the inorganic part is a robotic arm and various computing processes, the organic part of the installation is Anabaena azollae, an aquatic plant  that forms the symbiotic relationships that fix the atmospheric nitrogen.

On the other hand; Fish, Plant, Rack (2004) is a robotic installation that uses an AI system that listens to pulses from the elephant fish Gnathonemus petersi to give an in-depth understanding of the hidden languages that expresses through sounds and light signals the relationship between the fish and its environment. Andy Gracie’s creative universe encompasses a range of fields such as microbiology, astrobiology and space exploration. His research process and approach to biological practices gives us a deep look into the relationships between the arts and the sciences. 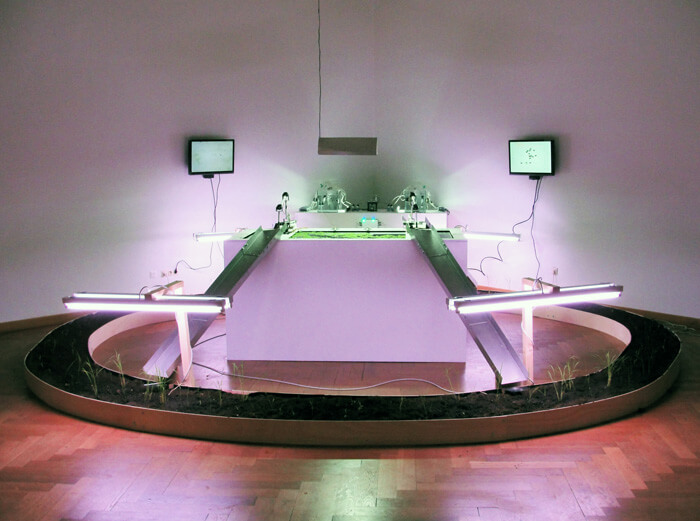 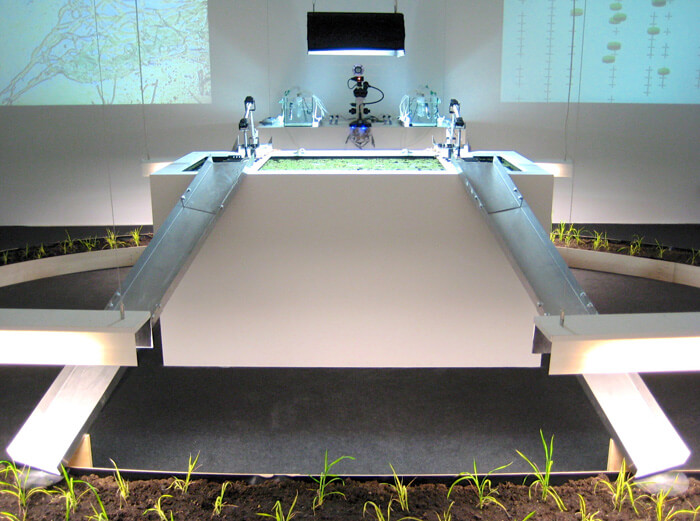 Your work encompasses scientific methodologies and technological systems that interact with ecosystems and living organisms, what drew you into working in the intersection of them?

I would say that it has been an ongoing process of realisation more than a decision. When I first started using digital technologies like microcontrollers and sensors I used them to get data from natural systems. Simple explorations mostly; using light and heat sensors to track Sun activity, for example. As my work with these technologies and subjects developed I realised that there was an enormous resource of quasi-esoteric and deep information within the natural world that could be tapped into, and that the dividing lines and channels of information exchange between ‘natural’ and ‘artificial’ were actually quite malleable. So then I began to make these ‘hybrid ecosystems’ in which technological and living agents could negotiate the development of emergent behaviours, promoting and facilitating relationships of exchange between whatever combination of natural and artificial agents were present.

The act of making these works, therefore, was an investigation into the potentials of collaboration between what can broadly be termed as technology and what can broadly be termed as nature in hermetic environments and the interdependence that prevails between agents within a structured environment. I was interested in having to consider what is natural, what is artificial and where the boundaries between such states and definitions might lie, and how they might be manipulated, blurred or even dissolved.

By applying a rigorous approach to how I accessed and used such data I became increasingly interested in something like the scientific method of research, and saw that artistic methodologies could be applied to the same situations. As the debates multiplied and intensified over the relationships between art and science I realised that what I was especially interested in was the point at which they were forced to diverge.

I am fascinated by how through experiment we can acquire knowledge and understanding, and I enjoy revealing how both art and science achieve those ends and then in continuity how they use or abuse them. The process of how we develop hypothesis, design an experiment and acquire information is central to the human condition but has been largely forgotten and given over to those authorised to do it for us. I strongly believe that we should reclaim the right and the habit.

Do you think that art should/could contribute much more to raise awareness of ecological and environmental issues?

I think that art can be an effective means with which to contribute to a raised awareness of ecological and environmental issues but I don’t think it has an obligation. What I do believe is that through artistic practice and experience people can acquire the tools and understanding with which to find out for themselves what the issues and realities are. It is easy to stand up and say that the climate change deniers or evolution deniers are wrong, for example, and to hold up some stats, but we don’t really genuinely know anything until we experience it for ourselves. There are so many great artist/activist groups and individuals now doing work in this area; contributing to knowledge, understanding and creative approaches to finding solutions for the ecological problems we are faced with.

Furthermore, if we don’t cultivate notions of how amazing, fascinating, complicated, messy and fundamental nature is then we can’t expect our own or future generations to really care about it or engage with it on any meaningful level. Finding a balance between conveying such messages while remaining objective and critical is an ongoing challenge for artists.

Drosophila titanus (2011-ongoing) is a speculative art project with solid scientific methodologies/experiments. It ‘explores notions of speciation, biological perfection and the future of life forms in space’. This reminds me that according to a paper in Science (January 2016) ‘we are in the midst of the so called sixth great extinction, the Anthropocene or the age of the humans’. Could you tell us a little bit more about the intellectual process behind? How do you image the future as species?

As with most of my projects, Drosophila titanus has a number of interwoven threads and narratives running through it. Some of these are, as mentioned, speciation, biological perfection and the future of life forms in space. The project aims to remind us that organic life is a fluid and ill-defined process, that the environment we know now won’t always be like that, and that the human hand plays a large part in dictating the where, what and how of life as we move forward. I have been labelled as a ‘post-humanist’ or a ‘post-terrestrialist’ but I wouldn’t necessarily agree with that. I do, however, have a great interest in speculating about what possibilities there might be for life and how it will be forced to adapt. Maybe we need to literally adopt the scenario of mutate and survive.

Drosophila titanus references how we create monsters through the same process of artificial (or directed) evolution by which we created puffy eyed goldfish, poodles and corn on the cob. It is also about how when we consider extreme survival or pioneering strategies for species there are a set of criteria that decide which individuals are the best suited for selection.

To create a species of Drosophila suitable for life on Titan (which is impossible, just to be clear) then some radical decisions have to be made about not just acclimatisation to a new environment but also how we apply selection criteria to individuals. If the recently discovered Anthropocene is genuine, then the real effects will only be seen after another 2 or 3 or 4 decades, maybe more. At this point the Terrestrial ecosystem will be very different, life will have to adapt faster than natural evolution is usually capable of and survival requirements and criteria will probably filter out a great many individuals of most species – humans included.

The scientific field of Astrobiology has as one of its requirements the understanding of the extremes under which life can flourish, and how this can drive mutation and evolution. As we become increasingly aware of the accelerating effects of the Anthropocene we can apply similar experimental processes to figuring out just how ecosystems will be affected and how unadapted most species will be.

Fish, Plant, Rack is a project that accommodates three different forms of intelligence. How do you define AI? And what did you learn from it?

AI is descriptive of a machine or digital system that is able to process information and make decisions based on its own inputs and calculations. It can offer the illusion of thought. But what for me is more interesting is not the simulation of human intelligence, but the investigation into what intelligence is. Intelligence in many ways is more about perception and interpretation than it is about rapidly processing permutations in order to find the best one.

When working with AI on the one side and living organism intelligence on the other, you very quickly become how rigid computers are and how flexible living systems are. The fish was incapable of performing a million calculations per second but still it understood its environment more quickly and more profoundly than the robot did.

I haven’t been working with AI for some time now, so I’ve taken my eye off the ball a bit as regards current thought and developments. However, I still get the impression that the common mistake is to confuse the ability of being able to hold large amounts of information and calculate things quickly with intelligence, both in humans and machines.

One of the best things about being an artist is being able to engage with deeply interesting subjects without knowing exactly where they will take you. I feel less associated with the BioArt field than I used to, I have a strong interest in space research but wouldn’t call myself a Space Artist either. As incentives to engage with fundamental physics emerge – such as the program at CERN – I can see how that could inform a research path as well. It is a deeply fascinating field and full of the mysterious, contentious, abstract and metaphorical material that is a gold mine for artists. However, I’m also not interested in becoming a Physics Artist, or whatever people choose to call it.

I still have a lot of work I want to do on semiotics and simulation, and that could well include elements of living material, space and fundamental physics. My research is very broad and provides me with a great amount of ideas and inspiration, so I can certainly say that my work will continue to fall into that category known as ‘research based’. I currently have no idea what the actual work itself will be like though.

Actually, I do have a few ideas but its not time to discuss them yet. I can say with confidence though, that the days of the complex robotic installations might just be over. Possibly.

Finding enough time to work without real life and work related administration getting in the way. There is also the personal and artistic challenge of keeping things fresh and evolving without losing track of the solidity gained so far. I’m actually trying to simplify the way in which I devise and produce work, but my natural instinct for complexity and chaos is a hard one to beat.