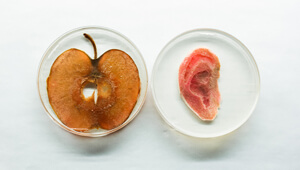 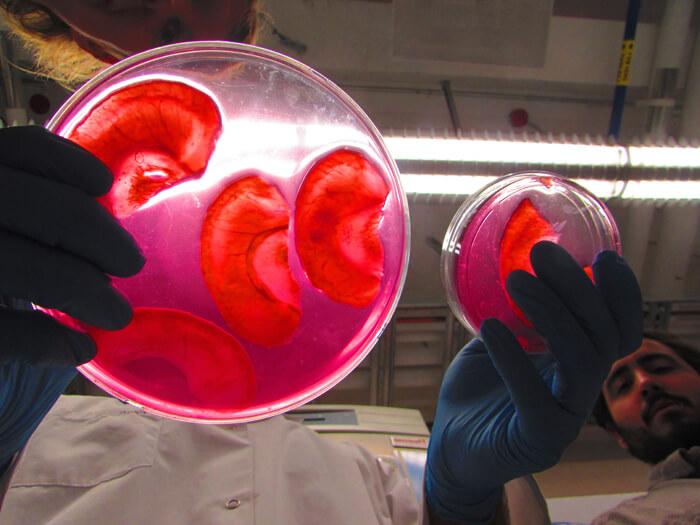 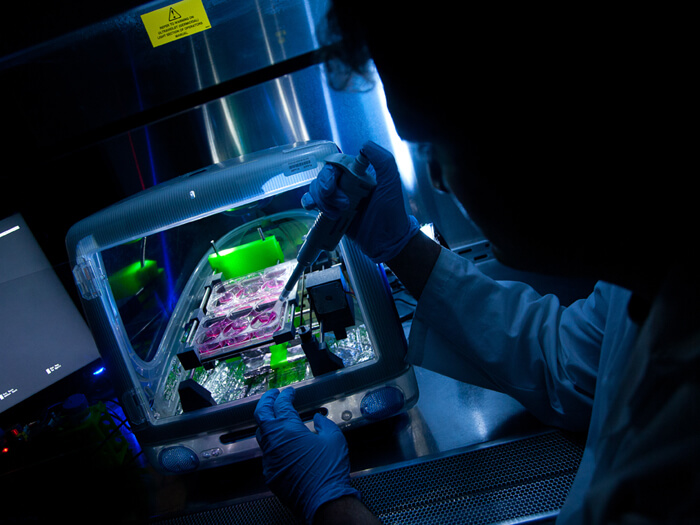 From unusual and extraordinary perspectives is how projects get started in the laboratory of Andrew Pelling, a place where the highest values are curiosity and the exploration of creative science. Pelling is a scientist and entrepreneur whose team at the University of Ottawa brings together scientists, engineers and artists. His lab combines numerous disciplines such as molecular and cellular biology, biophysics and bioengineering to investigate the biological mechanisms by which cells detect and integrate physical stimuli from their environment.

One of the areas of Pelling’s work covers “physical hacking”, or manipulation of living cells to control their behaviour. This practice is in contrast to genetic manipulation, or conventional biohacking, and offers a low-cost and accessible sources of biomaterials. Few experiments will receive the attention he generated using an apple as the scaffold on which to grow ears made of human cells. Following the same idea of using plants as biological frames, one of Pelling’s latest projects will use asparagus to grow the axons and neurons needed to rebuild patients suffering from spinal cord damage.

Producing DIY lab equipment using hardware you can find in the garbage is also something Pelling is passionate about. To make scientific research more accessible and affordable to everyone, he has founded Spiderwort, a company that develops and sells kits to create your biomaterial, or even an incubator necessary to grow and maintain cells.
Pelling’s work in biomaterials emerges from a fascination with nature and simple materials; his experiments represent a step forward in tissue engineering, one that opens our minds to new possibilities of biomaterials and broadens the limits of science. Imagine a world where you can design and create an organ in any way you like … maybe it’s just around the corner.

The work at Pelling Lab spans different practices and areas, from human and environmental health to biohacking and the development of socio-ecological system designs. Could you tell us a little bit more about the intellectual process that led you to establish Pelling Lab?

When I was a postdoctoral researcher, I remember routinely telling colleagues about my latest discovery – usually some tiny bit of new knowledge that the world had never seen and I was the first to realize. The beautiful thing about “knowledge” is that it is never complete, never fully formed, always changing and often ambiguous. And the thrill of the type of work I do is that by asking unconventional questions, one is able to contribute in some small way to shaping the current state of our knowledge. Given that romantic backdrop, and getting back to my colleagues – after telling them about my latest tidbit of new knowledge I was often met with blank stares and the horrible and inevitable question, “So what’s the application?”.

I really hate that question, because seriously, who gives a shit? The question implies that whatever I was working on only had value if there was some perceived economic or healthcare benefit, regardless of how bogus or unrealistic it was. Knowledge, in and of itself, was without value unless it was qualified by some “application”.

It was during this time that I decided to start my own lab, a place where we would simply value curiosity. Period. And I realised that the best way to foster an environment in which people are always asking unusual questions was to fill the lab with different perspectives, disciplines and practices, especially those which fall well outside of the traditional and arbitrary boundaries of Science. I was pretty sure I would definitely lose my position when it came time for tenure and promotion so at best I would have about 5 years to try and pull off this experiment. But to everyone’s surprise, here I am. Tenured and promoted. I don’t know how I slipped through the cracks but I take that as a sign that I probably need to try harder

Some of the main assets of Pelling Lab, but not only, are understanding how cells respond to artificial and unusual stimuli (to help comprehend pathological cellular processes) and create living, biological and functional objects that do not exist in nature; what (bio)technical invention do you think that will have more impact in real life in a (not too distant) future?

After opening a lab and letting people loose, we started asking unusual questions like, Can cells climb stairs? Do cells care about being poked? What happens when I put kidney cells from a dog inside a mouse heart? Can we grow Audrey II from Little Shop of Horrors? Actually, I guess a lot of our questions are inspired or informed by the work of others (Stelarc, the Tissue Culture and Art Project, Frankenstein, cheesy SciFi movies, etc.). Anyway, to answer these questions, we started building all sorts of contraptions and designing strange measurements and experiments. Now here is the funny thing, we ended up doing some useful things without even trying. We made discoveries with actual medical relevance, we authored some disclosures and intellectual property, commercialised a few devices and even spun out two companies.

Doing useful things was a total accident and sometimes I feel like I need to apologise for it. However, honestly, I have no idea what invention of ours, or anyone else, might have impact in the future. Right now it certainly seems like our work on plant-derived implants has some potential impact (e.g.  the “apple ears”, side note: these were originally commissioned by Oron Catts for the Demonstrable exhibition, so I blame him for creating an application out of work that was originally designed to be totally useless). There are certainly the obvious medical applications of this work, but those are far away as clinical trials still need to take place (something we are pursuing). However, I think the most interesting impact is in the fact that these things can be considered open source wetware, something that can be made at home and potentially used purely for cosmetic augmentation and expression.

What directions do you imagine taking your work/Pelling Lab in?

This is an extremely tough question to answer given the way we operate. Over time, the disciplines represented in the lab and the balance of scientists, artists, social scientists etc. all vary and fluctuate. This means that the perspectives and ideas floating around in the lab evolve, often in unpredictable ways. So it is very hard to say what the next projects will entail. Many years ago I freed myself of any expectation that I, or the lab, would become “experts” in any particular field. Therefore, I am completely open to simply following what interests me at any given time.

I absolutely love this sort of ambiguity and unstructured plan. It leaves open any possible future and I’d much rather be operating in a space of constant speculation, rather than following some sort of roadmap or goal. At this point, I am also starting to think that the “Pelling Lab” has actually run its course. I’ve conducted the experiment, convinced myself that it works and I basically understand it. So it’s really time to think about the next experiment, whatever that might look like. If anything, whatever I am involved with, it will at its core be about creating spaces that nurture people who ask unconventional questions and support them in methodically exploring those ideas in order to develop evidence-based knowledge and conclusions.

What is your chief enemy of creativity/creation?

If I’m honest, I think these institutionalised things are actually an engine for creativity. Actively working against the evils of all three seems to lead to the work I find most interesting.

Atoms. Seriously, think about it.