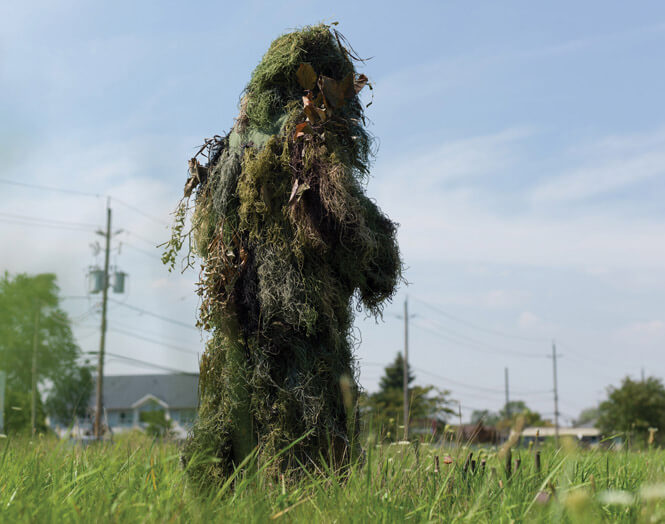 ALANA BARTOL, the relationship between man and earth 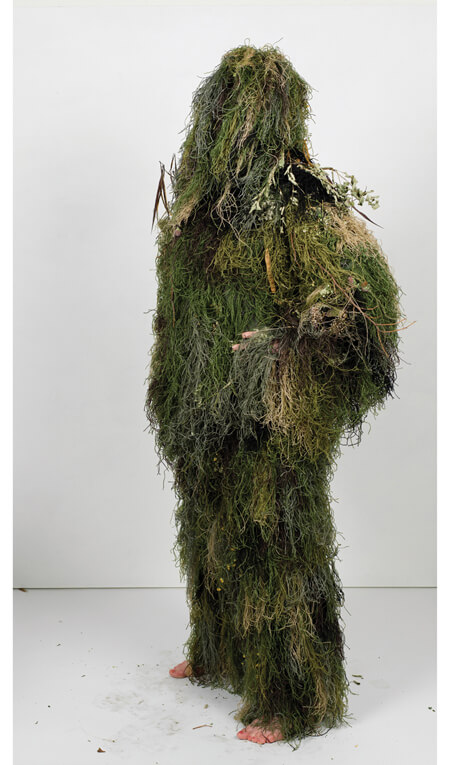 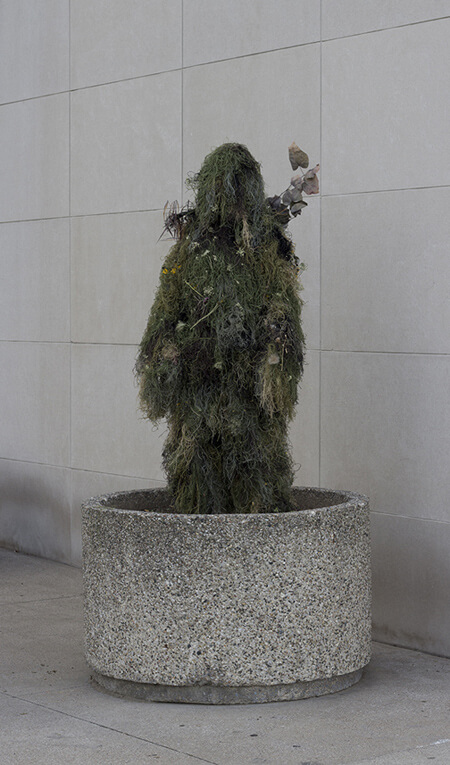 The work of interdisciplinary artist, Alana Bartol, heavily revolves around the complex, intertwined relationship between man and earth. Within every project, Bartol’s work references the continual exchange between the non-living world and one and another, both within and beyond the human body.

In Forms of Awareness: Ghillie Suit, this living sculpture and performance piece serves as a visual and physical representation of the blurring boundaries of natural and man-made landscapes. This camouflage plant-human hybrid is the ultimate symbol of the ignorance of man to the urbanisation and destruction of our natural environments for suburban development. Bartol’s most recent ongoing work, The Dowsing Project, explores the method of ‘water-witching’ as a means of creative investigation into our interconnectivity with nature in our everyday environments. Bartol utilises participatory workshops using this technique as a means to create a dialogue and question our understanding and connections to and with water and the cities we live in.

Through collaborative and individual practice, participatory works, drawing, video, and performance, Alana Bartol aims to bring to our immediate attention, with intent to enhance our understand and knowing, the invisible forces that are shaping our everyday environments.

Your work involves art, science and ecology. When and how did the fascination with them come about?

Though I decided to purse an education in the arts, I have long been fascinated by the biological sciences and ecological relationships between humans and other species. I developed an appreciation and love of botanical and medical illustration at a young age.

Part of my childhood was spent in Halifax, NS, where I dreamed of one day becoming an Oceanographer to study the creatures and phenomena of the oceans. As I developed my art practice, I began to work in performance art as a way to explore alternative epistemologies within and beyond the human body to question the universality of knowledge.

What are the possible ways of knowing within and beyond the human body?

When do we feel physical, emotional and psychological connections to other species in our environments? My fascination with the natural world led to my interest in environmental concerns, science/art collaborations, biotechnology and inter-species relationships.

What do you expect from the collaboration between science and art?

Whether I am camouflaging in suburbia, or exploring divining as aesthetic practice, my work centres on making visible the invisible in our everyday environments. I hope to continue to meet and collaborate with those working in the sciences to exchange ideas, information and ways of exploring how invisible forces are interpreted, visualized and studied.

What was the most difficult part of ‘Forms of Awareness: Ghillie Suit’ development? How did you come up with the idea behind this project?

There were many difficulties along the way but that is part of the artmaking process. I love the process creating work more than the final piece and I see the entire process as part of the work. Forms of Awareness: Ghillie Suit is an ongoing project that I began in 2012 in Windsor, Ontario, the city where I grew up and returned to in 2012. In this series, military camouflage is re-positioned in the open air of suburban neighbourhoods. She appears in various green spaces such as green zones, naturalized areas, trails and spaces slated for suburban development.

Born in Windsor, Ghille may serve as a foreboding or protective guardian figure. She is a trickster of sorts, moving between human-made and “natural” landscapes, while questioning our perceptions of gender. I recently moved, so my next challenge will be to see how the project evolves in my new home: Calgary, Alberta.

The opportunities for exchanges between artists and scientists should be plentiful, yet the separation between the fields makes it difficult to initiate and sustain collaborations, let alone have conversations. I hope to be able to breakdown some of the boundaries between the two fields. There is a conversation piece inspired by “A Rose for Direct Democracy” by Joseph Beuys that I have been thinking of organizing where artists and scientists come together to have one-on-one conversations. A graduated cylinder would sit on each table for two, holding a single rose.

I often look to the work of Joseph Beuys and the concept of social sculpture as a way to think about how we mold and shape the world in which we live, the role of the artist in society and how artists might work with others towards a humane and ecologically viable society.

I go through periods when it is more difficult to dedicate time and energy to my artistic practice. I never have a lack of ideas or inspiration but it is always a struggle to find the time to explore them all. Finding the financial resources to sustain my practice outside of full time work always an ongoing struggle.

A sense of wonder and curiosity.

(All photos from the series ‘Forms of Awareness: Ghillie Suit’ (2012-ongoing). Courtesy the artist)