We open the festivities season with a very special mix from DJ, producer and musician Curses, with a dreamy compilation of cinematic elements, radio and tv samples from the 80s and 90s, and an extension of his passion for mixing New Wave and the dark and weirder side of Italo Disco.

Originally hailing from New York and currently based in Berlin, Curses is well known for blending his Rock & Roll roots with the darker side of Disco and Electro. In both his DJ and live sets. Curses also incorporate his ghostly vocals and guitar with flashes of EBM, New Wave, Post-Punk, and Psychedelic synth vibes.

After his debut full-length Romantic Fiction in 2018 on Jennifer Cadini’s Dischi Autunno, this year, Curses released his second album, Incarnadine, also on Dischi Autunno. His compositions blend Morricone-inspired guitars with elements from early 80s music genres like New Wave, Post Punk and New Beat, pushing the boundaries of these references with an emphasis on his own mysterious vocals and guitars.

The album is a dialogue between the inner self and outer and the romance of eternal and immortal existence. With a big inspiration from the cult classic film The Hunger, which explores themes of immortality, love and timelessness, the post-modern vampire film contains a dark, glamorous atmosphere.

Slick production and dark, grooving melodies push the listener down a sinuous path with nostalgic, moody guitars and haunting vocals. Music is caught in a push and pull between the melancholic beats of the past, contrasted with a contemporary and sophisticated production; the album pays homage to Curses’ musical roots and the sounds that have shaped him.

The mix he has prepared for us is a sort of version of all the artist’s inspirations taken to the weirdest and most experimental, and as he says, is another good disconnect from the screen overload. Escape with it. I really enjoyed doing something different than a club mix. It is always in the back of my desires but rarely comes to fruition.

Earlier this year, you released your second album, Incarnadine. Could you tell us more details about your creative process for its production? Did you start with a very clear idea from the beginning, or was it something that evolved and was shaped progressively? And was the process very different from your previous album?

Incarnadine is an ode to one of my favourite 80’s books and films, The Hunger, embracing the infinite romance between mortality and immortality. Incarnadine, also a nod to Macbeth, is the colour of blood that runs through our veins as mortals. I took this theme as an inspiration throughout the entire album. It was the pandemic’s beginning, and so many questions about future paths, endings, and beginnings raced through my days.

What did you want to explore with this new album (either more technically/sound or conceptually)?

As a musician and guitar player, the DJ is an afterthought when it comes to Curses. The live band is the natural progression, and with this album, I embraced songs more than tracks for the club. I returned to my band roots of, verse chorus verse structures instead of putting the climax of a drop in a disco as the main priority.

You are also very well-known for your DJs sets.  How does the DJ side inform your productions or live sets?

I approach DJ sets like I do playing instruments in a band. Matching keys, creating new compositions with blends between different tracks. So I actually think the opposite happens. My live sets inform my DJ sets and how I approach mixing tracks in a club.

Curses also has very strong aesthetics, both musical and visual. Apart from the most obvious 80s new and dark wave, post-punk, and dark cinematographic references. What has been inspiring you for your productions or DJ sets most recently?

Film also plays a huge inspiration. From Directors like Derek Jarman to Fellini and Wong Kar-wai. Jarman’s, Jubille especially has this Mclaren/Vivienne Westwood attitude that has always inspired me. Mixing the Punk with Romantic; is the same approach I take with music.

Where would you like to take the Curses project sound into?

More and more focus will go into the live band when it comes to releases. I will, of course, still DJ; I absolutely love it and love producing remixes for the club, but my main passion for the limitless future will always be live music, and I continue to evolve in that direction.

Incarnadine talks about immortality, love and timelessness, and physical desire. What is your relationship with technology in reference to those topics nowadays, when each day, we perpetuate our digital immortality? We stamp love messages that will remain timeless on the internet cloud, but physical, carnal relationships have become more abstract and mediated by digital outputs for many people. And how do you cope with technology (screen/digital) overload?

This is why it is important to occasionally unplug from the grid of modern life. Disconnect. Go into the forest, and immerse in nature. Escape. During the first pandemic lockdown, I began running. This release from screen life, even briefly, helps me not let the digital world control the carnal. 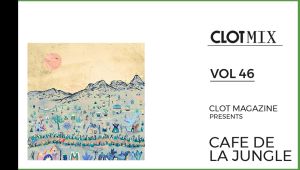