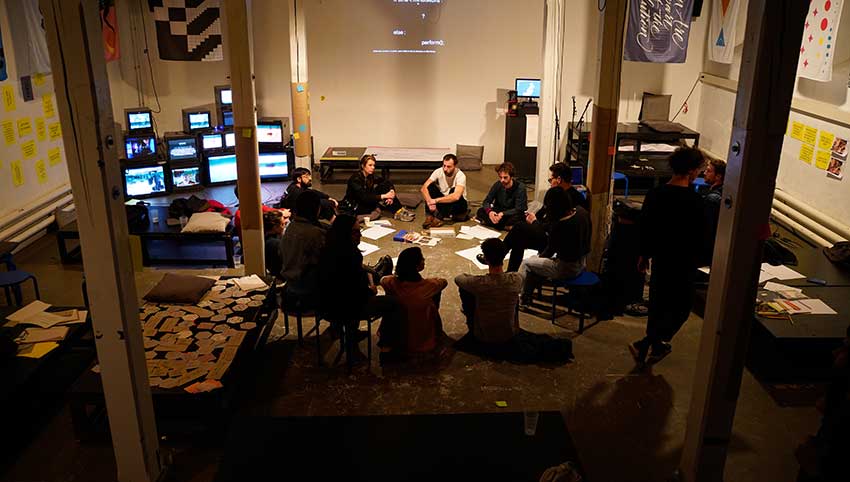 Between 01.-03.03.2019, a group of 50 artists, creatives, activists and researchers gathered for the first edition of OTHERWISE– a festival-as-research. The festival was initiated by Swiss-based H0 – Institute of Metamorphosis consisting of artistic researcher Michaela Büsse and theatre and performance artist Benjamin Burger. In this reflective piece, the curators review their experience and project how the kick-off to their long-term research project informs their plans.

About OTHERWISE In response to the idea of the post-Anthropocene—that is, life after human exceptionalism, ecological catastrophes, political extremism, and accelerated global fossil capitalism, OTHERWISE explored strategies for survival “in the ruins”. The Institute’s first offspring manifested as a 3-day multisensorial and experimental festival as research. We selected 50 collaborators to join us for three days in Zurich through an Open Call at a location known for their experimental approach to performance arts, Gessnerallee. The first edition of OTHERWISE was designed as an open-ended experiment. Participants joined in as collaborators; that is, everyone who attended brought along a session herself. There was no designated outcome or external audience that would witness or judge the process.

It took us some time to reflect on the event and its outcome. Being overwhelmed by the numerous inputs presented and feelings aroused, it’s hard to put in words an experience geared towards the singularity of a moment. The multisensorial qualities are inevitably flattened in language. Therefore, this can only be an incomplete and partial report of a happening distributed through and between 50 bodies. When you meet people you have been emailing with for a while for the first time, it comes with anxiety and curiosity.

Bringing people from different places and backgrounds together into a set of intensive encounters is an experiment that we could only fully grasp once we were in the middle of it. Without having a goal and outcome in mind, what OTHERWISE achieved, according to the group, is to create a safe space for exploration beyond the staging of egos, financial pressures or attention economies. Vulnerability, generosity and curiosity might frame best the atmosphere during these days. Building such a safe haven doesn’t come without pressures for those organising it; however, known to have created something meaningful motivates us to continue in a similar direction. Looking back on the differences, three common themes emerged, which not only created a thread through OTHERWISE but will act as pillars for our future investigations.

Being and Becoming The festival days each started with narrated meditations which reflected on our ecological being in the world and located the human within a planetary context. Lying in stillness next to each other immediately created a feeling of community between strangers. We explored time scales of plastic particles in the oceans and the differences between human time and stone.

Through choreography, we tried to immerse ourselves in different perspectives of non-human life-forms such as trees reflecting on the limitations and potentials of these kinds of practices. In our self organised dog walk, we visited a dog shelter and guided the dogs to explore the meaning of “companion species” beyond Donna Haraway’s descriptions. In all these sessions, entanglements with ecological systems were brought into focus which raised the question of how, if at all, we can foster a deeper understanding of openness and distributed agency. With such investigations, the threats of generalisation and anthropomorphisation linger in every corner, however questioning our knowledge cultures and space-time-perception, training ourselves in interoception, is a practice we further want to cultivate.

Bodies and Systems The majority of sessions challenged body knowledge and behaviours and pointed out that our cultures mostly condition our bodily experience, habits and intuitions. Actively using the body as a medium for exploration allowed to shape new connections and understandings that need and elude rationalisation. We experienced the body like an electric channel and instrument, a technological agent or “cyborg” using the smartphone as a sensing prosthesis. We challenged our body routines by ignoring reactionary thoughts and intentions and ending up in a state of permanent inner conflict and uncontrolled bumbling movements. The uncontrollable, the transgressive acted as self-empowerment. We encountered the conscious abandonment of reflection, contextualisation and explanation as a driver of bodily awareness and knowledge creation that embraces the subjective and situated experience.

Fiction and Politics Fictionality, the capability to imagine the otherwise, served as a crucial element throughout the festival. By de- and reconstructing narratives of various pasts, presents and futures, we reflected on the political dimensions of storytelling and the performative qualities of language and imaginaries. We simulated a speculative acoustic extraterrestrial environment in which the participants could explore the hostility of an alienated space playfully; we called out a manifesto in which we identified active hope as a transformative power; and we tried to subvert the map- a fictional object that represents and translates political systems into space. Acknowledging stories, concepts, acclaimed truths, tools and methods as cultural artefacts revealed its historically grown and charged reality. Questioning our own biases and producing new stories, tools, and methods that account for the difference will be an ongoing concern.

Reflections With OTHERWISE, we created a space for the in-between, a framework for collective overwriting, unsettling and enacting biases beyond individual and society, nature and culture, geology and technology with its small-scale format OTHERWISE meant to provide the best possible breeding ground for new subjectivities to rise. As the first initiative by H0 – Institute of Metamorphosis, it laid the foundation for the next exploration to come. Next, to the three fields of practices that emerged as future research topics, we encountered that the will to challenge our daily routines and practices, decode and unlearn habits is key to transformation. OTHERWISE was a weekend full of positive notions, active hope and gratitude towards each other. It demonstrated on a small scale the big transformative powers that are embedded in our society. There is a transformative potential inherent in everyone if we develop and cultivate practices to bring it forth. Change happens by changing the narratives about ourselves and creating new frameworks for experiencing otherwise.

OTHERWISE was a great kick-off for our collaboration, and the wide range of contributions allowed us to test directions for our future investigations. Whereas on the one hand, we crystallised the three fields of interest: ‘Being and Becoming’, ‘Bodies and Systems’ and ‘Fiction and Politics’ that explore practices to foster change, we, on the other hand, realised that these practices would benefit from framing of different theories of change coming from biology, chemistry, systems theory and others. Therefore, next to its artistic experiments, the Institute will incorporate voices from the various disciplines exploring and describing the change. Artistic research is not a new approach and is claimed to be at the core of many practices and initiatives. However, we think it could and should be taken further. The Institute will act both as a facilitator and agent to explore the transformative power of practice-based research.

While OTHERWISE was focussed on strategies and practices with a very open spectrum of topics, the next iteration will be site and topic-specific. This allows us to developed and further explore practices based on a common denominator. To have enough time and space for encounters, this exploration will have a residency-like structure and will be limited to a small number of participants.