‘Tomás Sánchez and his omen to the future’ by Silvia Iacovcich

When I observed Tómas Sánchez’s artwork for the first time I was about to turn eight years old – the guiltless age when you are curious and every idea gets processed through the endless use of genuine imagination [1]. From the perspective of a child, Al Sur Del Calvario (At The South Of Calvary, 1994) left me wondering if that vast desert depicted did indeed exist. More than twenty years later, this painting strikes me and makes me reflect more than ever.

Al Sur Del Calvario portrays a landscape inundated by waste and rubbish overflowing in an abandoned, ominous scenario. The perception at first glance is that it’s infinite in space: there’s so much junk it’s uncountable, it towers in bulk almost reaching the horizon. Every object lays waste, depredated of the use it was created for, meaningless. It’s a distinctive scene that still accommodates a somewhat funky, eccentric beauty: the litter is colourful, glowing, reminding the viewer that garbage will stay there, existing for a long time and more alive than everything else – evidence that someone has been both living and consuming. The eye is invited to look at the gleaming rubbish in the foreground – if you manage to wade through the polluted air, the foggy atmosphere and the hills in the background that seem to be made of litter as well. The sinister beauty of a valley made out of tossed items, turned into litter, stands out as a reminder of the degradation to contemporary society through mass consumerism.

The painting is full of symbolism: a series of crosses create a structured fence in distance, three of them grandstand in the middle of the piece, as in Christ’s crucifixion – an invitation to redemption maybe – in accordance to human destiny, history or beliefs. A ladder points towards the crosses; in the front, barbed wire warns the viewer to be careful – you might have to entangle yourself to get out – or maybe it is just another canonical hint to Jesus’ crown of thorns. In any case, it doesn’t look friendly.

Sánchez, master of hyperrealism, has focused his artistic career on depicting the real – and most of his artwork shows the bright side of the natural landscapes we inhabit. Most of Sanchez’ compositions illustrate immaculate tropical vegetation, fresh flourishing forests, unreachable turquoise skies and pure waters: conveying an idea of tranquillity, they encapsulate the regeneration of nature when it is left undisturbed. Navigating one of Sánchez’s paintings is like diving deep inside the peaceful ecosystem and its brilliant colours – but not only. Throughout his art, (and especially during the 80s), this artist has frequently returned to reflect upon the subject of waste: having visited a lot of big cities (Mexico City especially) he felt inspired to depict the natural silence of human ‘prodigality’. We get lost into the litter’s habitat as much as we do into the views of rivers and clouds: the feeling of astonishment is the same but the reasons are different – than junk won’t evaporate nor merge with what has already pre-existed, though it might fully outlive it.

The omen that Sánchez inflicted upon humanity is obviously more imminent today than ever: despite this artwork belonging to more than half a century ago, it makes us uncomfortable to know that this landfill might still be located where Tómas Sánchez took inspiration from all those years ago, and not very different if not for its magnitude. While most of his work might have already ceased to exist in the real world, ‘At The South Of Calvary’ will still be contemporary in ten, twenty, fifty years. A premonition of a society that hasn’t changed, but has stocked its own waste in piles until it imploded.

As a child, his painting fascinated and scared me at the same time; so after it was explained to me, I happily volunteered for a very well known NGO, a leading organisation in wildlife conservation and endangered species. I was very proud of my help and I thought that would have been enough; that during my lifetime so many discoveries would be made anyway, that today I would be using a spaceship to move in time and space, employing only renewable energy for machine that disintegrates any non biodegradable substances, leaving the world in a perpetual state of immunity from every sort of disease or dross.

Unfortunately sci-fi didn’t fuse with the real world, and during the past years, it seems the log of stats from the site The World Counts became instead pretty urgent to acknowledge [2]. The site presents shocking environmental facts and statistics on everything, from child labour to toxic waste and climate change. It claims “Never before has our planet, and we as a people, stood before the number and scale of man-made challenges than we do today. Real change is needed. Not just from politicians and businesses – but from all of us. Without understanding the situation, and without developing a deeper awareness about the lives we are living – and the consequences they have – such changes are unlikely to occur. A list of numbers that change every second and gives a weight to the monumental catastrophe we are facing. A connection made by the site itself is appalling – if you compare Earth’s history to a calendar year then we (humans) have only existed for about 37 minutes – and we have used 33% of Earth’s entire natural resources in the last 0.2 seconds. We are literally drowning in plastic. In this countdown, we have twenty-five years left in time to see the end of the world as we know it – the same numbers of years which have passed since Sanchez depicted his litter apocalypse.

We have known for a while that time’s running out, and as the scientific community starts considering fundamental action to reduce the emissions in 2020 to avoid dramatic consequences to the environment, a pandemic has frozen the world long enough to help with the collapse of emissions generated since the second world war.

NASA images from less than a month ago show a decline in CO2 emission and air pollution falling rapidly ‘as virus spreads’, ‘falling sharply’, while the WHO talks about a reduction of pollution of 20%, which is of course mainly related to the worldwide lockdown and our change in habits [3]. Living slowly seems to have become a new motto, or maybe simply a new essential pattern in our daily life, starting to positively affect all the species around us, not only ourselves.

Through remote connections, smart working and less gasoline to consume, we are reaching different perspectives and new opportunities over the long run – on the other side, dealing with the garbage we already have stocked, as this article by National Geographic explains [4], describing how it is a priority to limit the climate change and adapt to its impacts. ‘A Green Future: Our 25 Year Plan to Improve the Environment’ [5], the UK government scheme we are currently following, sets out what we will do to improve the environment within a generation. Our expansion over this planet has reached its maximum: Coronavirus is a zoonosis [6], a virus that jumps from a species to another, and another lesson from nature: we can’t mess up for long before we see the consequences.

It would be incredible to be looking at Sanchez’s work from a different perspective, perceiving it as a consciousness of how we escaped, not drowned into the consequences of our lethal mindset. Albert Einstein allegedly said “If the bee disappears from the surface of the earth, man would have no more than four years to live”: cleaning up the mess and re-educating ourselves to beauty will leave plenty of time and space for subjects that really define us – saving the world and sorting out people’s obsessions. 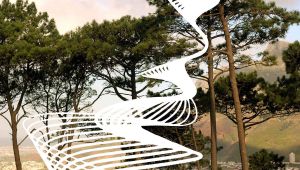 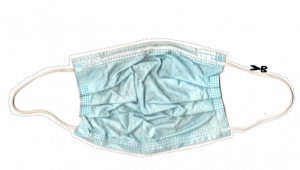 Column: ‘In principle, yes… covitizing the past’