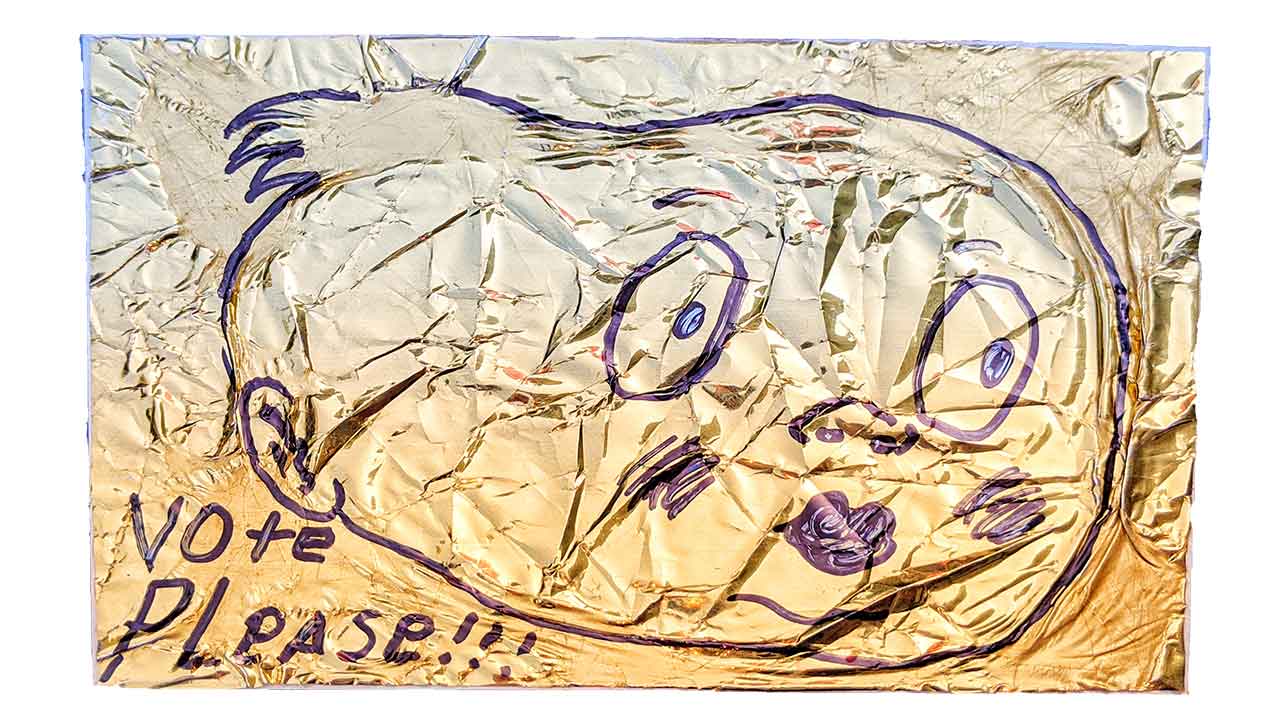 Some argue mail art waned in the 1990s when the internet provided an alternate collaborative space, suggesting it is a kind of proto-net art [1]. “Mail art has no history, only a present,” said Ray Johnson, one of the early mail artists punning on the gift of word and image [2]. With postcards, it provides a public yet private offering that cultivates a kind of cleverness in the sender; there’s a playfulness in its openness. Mail art was a popular movement in the 1970s through 1990s but has been reinvigorated recently in the United States by artists Mark Mothersbaugh and Beatie Wolfe in response to the politicizing of the United States Postal Service (USPS).

The digital age doesn’t seem like the moment for postcards, but when the USPS requested $25 billion (yes, billion) dollars to manage its flailing operation amidst a pandemic that has more people than ever voting by mail, the US President suggested shutting it down. Previous political figures have suggested the same, but this guy started to use it as a tactic to question the extensive use of mail-in voter registrations and ballots—which have no recorded fraud, despite his repetitive claims that it does. Given text and email, people don’t send letters as they once did, but USPS was established in the Constitution and across the years has served over and over again to produce the American Dream.

Benjamin Franklin was the first Postmaster General, a role he knew well from doing the same for Philadelphia some years earlier. The post was the way to connect the disparate colonies, now nation, with information, and so newspapers were delivered for free. Prior to the Civil War (1861-1865), the post couldn’t hire former slaves, since many worried they would learn that ‘all men are created equal’ from circulating debates and abolitionist pamphlets. After the Civil War, that ban was lifted and Postmaster Blair (appointed by Lincoln in the Civil War) made jobs available to women, too. By 1890, the hard-drinking, cigar-smoking, fast-shooting, “Stagecoach” Mary Fields transported the mail by wagon in the wilds of Montana [3]. USPS has been a major source of work for veterans and of its current 600,000 employees, 20% are veterans.

As Mark Mothersbaugh comments: The threat now facing the USPO seems to shake our foundation and challenge rights that, up until now, have been inherent. The fact that this has happened in this country not only needs to be documented but it needs to be questioned and commented on.

USPS is far from a perfect system and it has often inadequately rewarded its employees so that strikes are a longstanding part of its history…and yet it is the favourite government service of US citizens. It provides the elderly and disabled with prescriptions, as well as letters from loved ones to keep them buoyant. Private postal services don’t serve all rural areas of the nation but the USPS does. The Postal Service is in Article 1 of the US Constitution, the same article that describes Congress. It is in section 8 of that article, which establishes Congress with the right to coin money, establish an Army and Navy, and ensure copyright, among a slew of other expectations. It is vital to the nation, the circulating lifeline.

Mark Mothersbaugh and Beatie Wolfe established Postcards for Democracy “to encourage as many people as possible to support USPS (at this critical time), our right to vote, and democracy as a whole via the power of art” [3]. It’s a simple task for Americans to reclaim the importance of this service. The action means making a postcard or altering an old one. Buy a stamp. Then, mail the card to:

The artists will display the works, both physically and virtually, as is part of the inclusivity at the heart of mail art. Mark Mothersbaugh, in some circles better known as the lead singer of the new wave band Devo, has been a practising mail artist since the 1970s. He has exchanged postcard art with the famous, infamous and not so famous, creating a multi-decade image bank and inspiration resource. His recent Museum of Contemporary Art Denver exhibit was accompanied by a beautiful catalogue, Mark Mothersbaugh: Myopia (Princeton Architectural Press, 2015). Beatie Wolfe is a musician and artist who has repeatedly experimented with output formats, which in 2018 were presented in a solo exhibition at the Victoria & Albert Museum. These include creating a holographic app for her debut album, developing an immersive AR ‘anti-stream’ experience for another [4]. With Nobel Laureate Robert Wilson, she’s even broadcast into space via the Horn Antenna, which was used to prove the Big Bang theory.

“Lockdown has reminded me of the joy and importance of physical correspondence so showing our support for this vital institution (USPS) at this crisis point is paramount. And what better way to do it than via the power of art.” – Beatie Wolfe

The postal service was a way that people themselves went from one place to another when train travel was too expensive. The parents of Charlotte May Pierstorff gave her $0.53 in stamps to travel by mail carrier to Idaho in 1914. There is a letter from 1913 in the postal museum asking how best to ship a baby as any other service would be too “rough-in handling” [5]. Eventually, regulations ended this practice, but it highlights the intimate relation that the post has had. After my mother died, I started sending regular letters to my grandmother. When my life became immersed in digital culture, I found an app, Snapshot Photo, that would allow me to upload a photo and write a text, which they would print and mail so that she got a physical card. To me, these were transient messages. When she died, I discovered she had kept every one and now I have them, a memory of our exchange that reading emails never quite provides.

Mothersbaugh and Wolfe’s Postcards for Democracy offers a space for anyone and everyone. Children can learn about the value of communication as they produce art. Adults can be reminded that if you don’t use your voice, you risk losing it. As Chuck Welch said, “Cultural exchange is a radical act.” What a moment in history that to draw a picture and mail it is the radical step we need in the USA today.