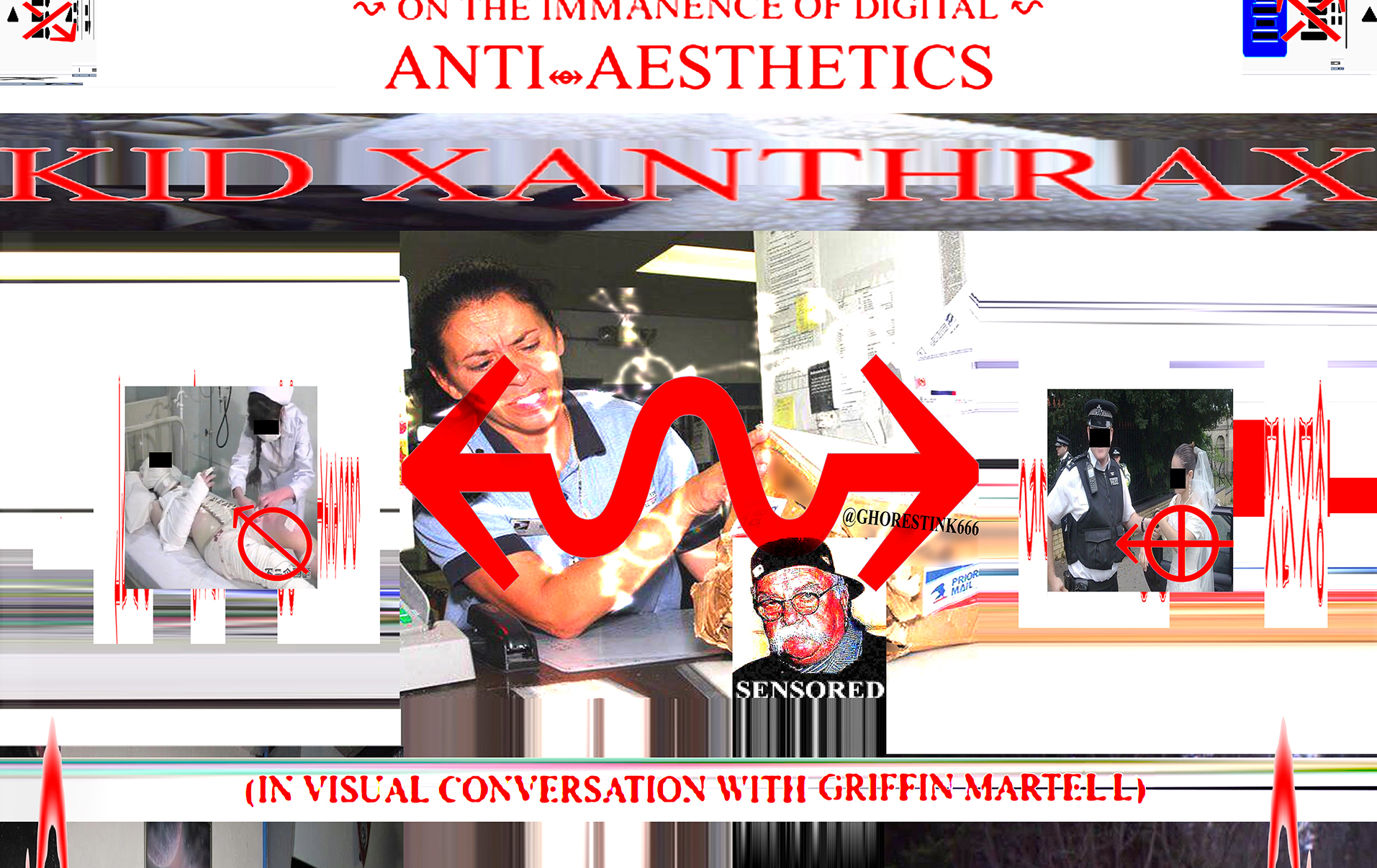 ‘Kid Xanthrax, on the immanence of digital anti-aesthetics’, a visual interview with Griffin Martell

The pseudonymous digital art provocateur Kid Xanthrax exists at the periphery of cyberculture, invoking irreverence for commercial, fine art “practice” through grotesque, “dank” meme aesthetics and absurdist humour. Their growing body of work appears to the viewer as a viral load of cursed imagery, an irruption of ugliness splayed across the computer screen. Some may find it distasteful but Kid Xanthrax’s self-proclaimed “ghorecore” style will intrigue those with a morbid fascination for the most bizarre and disturbing forms of content found on the Internet.

While Kid Xanthrax is an Extremely Online entity, they eschew the kitsch conventions of net and post-net art for a meta-mimetic anti-aesthetic that is more indebted to Burroughsian cut-up method and Cronenbergian body horror than whimsical seapunk dolphins or virtual plaza pastiche. For Kid Xanthrax, cyberspace is not some sort of escapist, fantasy realm but rather, a manifestation of the collective unconscious, a repository for humanity’s psychological excrement.

In this respect, their work acts as a reflection of our own private, repressed horrors and fantasies – subject matter includes but is not limited to: Renaissance paintings as furries, reptoid e-girls, Shrek fan-fic, trypophobia-triggering clickbait, extreme body modification and posthuman flesh orgies. Questionable, though it may be, this type of content is out there somewhere on the web. Kid Xanthrax specializes in extracting this content from the OP and re-purposing or re-presenting it in a new setting. This “practice” (a term Kid Xanthrax despises), in effect, collapses the distinction between “low” and “high” culture. Kid Xanthrax’s stylized depictions of crude sub-cultural artefacts of Reddit and 4/chan infamy such as Pepe the Frog or Wojak function as an affront to the chin-stroking art critic and a disruption of the boundary between the memeplex and the art world.

Transgression of aesthetic convention is a core tenet of Kid Xanthrax’s brand, evident not only in the content of their work but also the manner of its presentation. Kid Xanthrax’s work has been exhibited in various different settings, including gallery spaces, virtual exhibitions and even public parks. Informed by Dadaism and guerilla art methodology, Kid Xanthrax infiltrates these different spaces, confronting passive viewers, and sometimes, the general public, with their signature hyperreal graphics and installations.

Their first solo exhibition, TFW Too Intelligent, was presented in 2019 for PAF International Contemporary Art and Film Festival in Olomuc, Czech Republic. Here, their work was displayed in acrylic print, mounted atop heaps of coal and lava rock, suggesting destruction and natural disaster. The prints depict Goya paintings reinterpreted through Google’s DeepDream algorithm along with absurdly muscular and brainy anthropomorphic figures. In drawing a connection between the apocalyptic horror of Goya’s work and the anthropocentric logic of big tech, TFW Too Intelligent provides a commentary on the unchecked technological accelerationism that defines our current epoch.

Kid Xanthrax’s most recent exhibition, Nuclear Expressionism, is likely their most unorthodox in terms of medium and mode of presentation. Commissioned by Toronto-based experimental art curators Plastique Famille, the exhibition took the form of a post-graffiti installation and situationist happening at a defunct public washroom on the westside of Toronto. Chaotic energy abounds in Nuclear Expressionism, a radical, multimedia work that sees Kid Xanthrax working with toilets, trash and maggot-infested fast food. While the reclamation of public space for the purpose of art is not a particularly new phenomenon, it takes on renewed relevance in a post-COVID/post-scarcity economy. With Nuclear Expressionism, Kid Xanthrax raises a middle finger to the stifling formalism of gallery spaces while one-upping Duchamp with their repugnant readymades. Who says the shitter can’t be a gallery?

The Kid Xanthrax character is cloaked in layers of irony that reveal little of the artist’s true identity. As such, the below interview takes on a visual format, exhibiting the symbolic language and self-reflexive meta-commentary that are characteristic of the Xanthraxian persona.