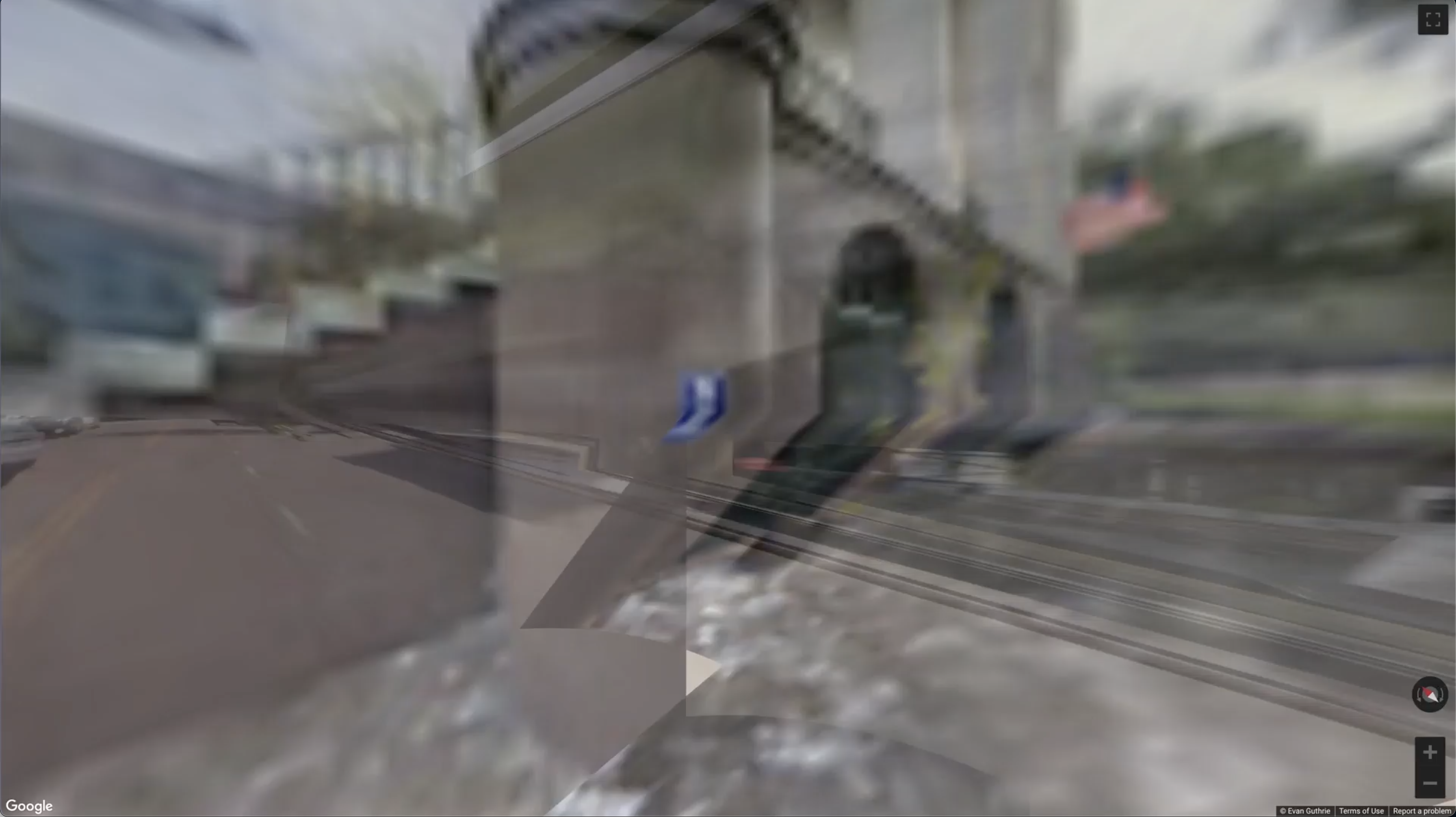 The HOBO projects bring flaneurism to cyberspace. In the society of surveillance capitalism, services such as Google Street View commodify human living space by turning it into a browsable stream of hyper-images scroll. Repeating gestures of a decadent flaneur online for the past few years, James Hoff has been sliding fast-forward through the monstrous space-image, manipulating it with a program written and developed by Hoff and the programmer Reuben Son. With this work, the artist endorses the politically subversive edge of his glitchy aesthetics. He uses live transmission and digital distortion to expose catastrophic events, which happened in places mapped by Google car cameras.

Hoff performs partisan archaeology of civilisational trauma by means of remediation of corporate surveillance. In his interview for CLOT, he explains how his recent flagship project HOBO UFO addresses two spectacular failures of modern civilisation: the meltdown of the Soviet atomic reactor and racial segregation in the USA. Both events, called HOBO UFO (v. Chernobyl) and HOBO UFO (v. The New World) (the second one in collaboration with DeForrest Brown Jr), are animated by Hoff’s intention to expose the fragility of technological infrastructure that our societies and personal experiences alike depend on or even take for granted in order to function.

In those performances, UFO becomes a figure of disembodied intervention of technology as power and at the same time, it exposes hidden dimensions of contemporary trauma behind the “neutral” vision of nonhuman surveillance. Techno-culture and technocratic power are built on trauma as the infrastructures are inherently failing and those inbuilt failures and destructive mechanisms become the traumatic share of humans living with technologies.

The artist points out capitalism as the strategy to tame the trauma by turning it into a commodity and potentially masking its painful history as the excitement of a spectacle. Distancing himself to that, Hoff instigates a parallel but rather more uncompromising attempt. Hoff’s own interest in political art and particularly the radical cultural expressions of Black communities in the USA turn him to concepts of subversion of civilizational trauma through empowering media art. In his collaboration with DeForres Brown Jr, he employs tactics of ‘Black sonic warfare’ that aim at transforming systematic oppressions through critical narratives aligned with disruptive artistic expression.

The interview below explains the development of HOBO UFO from a playful disruption of the public space of surveillance towards the very complex, ongoing collaboration with DeForrest. This year Hoff and Brown Jr are planning a VR version of HOBO UFO as well as a new film, both involving novel media aesthetics as weapons of social critique.

HOBO UFO has had a few iterations in the last five years. I originally developed the project as a site-specific work to accompany live performances. In this context, the work was improvisational and the street view journey would always begin at the venue I was playing. From there it would traverse the city, moving atemporarally through the city. Although it used the same technology it was much different from the latest iterations.

This early live version hinted at the larger conceptual frameworks that have come into focus more clearly with v. Chernobyl and v. New World. I was interested in subverting the audience experience and the personal relationship the audience members had with the technology while exposing the technology’s glitches and the unsteady infrastructure it relied on. I like that no two concerts would ever be the same and that audience members were seeing their city through a distorted technological vision that mimics or replaces first-person experience. I don’t think it was always enjoyable. . .

In 2018 I transitioned from HOBO as a live-work to HOBO UFO as more of a filmic work.

In general, I position Streetview within the framework of colonialism that comes out of a European and American drive to map and datify the world for commercial gain often under the guise of knowledge production or public utility.

Which locations did you choose for HOBO and why? How those site specific contexts alter the project?

The first HOBO UFO took place in London at the ICA in 2016 and this was followed by live shows in New York, Hong Kong, Basel, Dresden, San Francisco, Copenhagen, Bergen, Los Angeles, and Gothenburg. The first film iteration of HOBO UFO took place in Pripyat/Chernobyl and the second iteration visited several sites in the United States tied to the legacy of racism and slavery in this country.

Generally speaking, it was here that I began to conceptualize the project as a vehicle for exploring systemic breakdowns on a larger geographical scale, but also exploring the ideological and political fault lines that either pre-supposes or are exposed by them. By focusing on Pripyat and Chernobyl, I was able to collapse Google’s exploitation and commercialization of the site with the site’s transformation by the west from a memorial to the human loss of life and ecological devastation to the victory lap for western democracy and capitalism that it has since become.

The musical component of this work was constructed around what I perceived as the emotional component of the citizens of Pripyat and the surrounding environs as well as the metaphorical UFO visit. I wanted the score to feel both sad and triumphant at the same time.

For the American version, I teamed up with DeForrest to tackle some of the issues around race and the legacy of slavery in the United States, focusing on historic sites as well as contemporary battlegrounds in the uprising around George Floyd’s death in 2020. We had been working on other stuff for years and it made sense when the invitation rolled in from UNSOUND to use HOBO UFO as a lens to capture the milieu that we were living in.

This was a development for the project, both as a collaboration, but it was also the first time that visual media outside of Street View was used to help construct the narrative, which allowed for a more direct thematic appraisal. This added media allowed us to traverse the layers of history that create the sediment of America’s rotting democracy and the struggle of its people to actually achieve the rights and freedom they were promised by the Europeans subjects who created it.

What is the connection between UFO and race in the USA-located version of HOBO?

Essentially, we wanted to approach America as though it were being visited for the first time by media sentient beings that could tap into the legacy of race through media portals of the last century. DeForrest also provided another perspective which was the connection between UFOs and slave ships arriving in Africa.

The UFO is meant to be a proxy for a neutral observer that does not exist. All the sites in this version of HOBO UFO were directly linked to historic or current battlegrounds around the legacy of slavery and civil rights in the United States: The White House, a plantation, Charleston, Birmingham, Stone Mountain, Louisville, South Carolina, and New York City.

What is the role of field recording in HOBO?

They are important to both scores. In regards to Chernobyl, I recorded GPS signals in Pripyat and pitched them down to create the base samples that I would then manipulate for the sound design elements of the score. This is what allowed the score to achieve its hazy ethereality, which a friend described as a melody walking through a melting landscape.

In regards to the New World, the field recordings were left unaltered and were sourced from a multitude of media sources. They were vital to shaping the narrative in a way that the music and visuals alone could not. The sound design elements were built from tinnitus frequencies and white noise using granular processing.

How do you understand and engage with ‘Black sonic warfare’?

I understand it as the long history and legacy of black resistance through music. We can point to contemporary examples of course, but also historical examples that are hundreds of years old. My first experience with black sonic warfare was when I was a kid. I grew up and lived in a racist community in Indiana in the 1980s and early 90s. I literally had to share classrooms with the kids of Klu Klux Klan’s Imperial Wizard and my salvation from this toxicity was hip hop. It was a window out of the racism that surrounded me.

I credit groups like Public Enemy, X-Clan, and Poor Righteous Teachers for pushing the black radical tradition into early hip hop, one of the most radical art forms to emerge in the last century. To me, they were an education in radical politics and music at the same time. This was the music that politicized me and got me interested in language and poetry.

How do you feel about tourism media in Chernobyl Exclusion Zone?

It makes sense that the site would be exploited and confused with 80s nostalgia and an uncritical view of the Cold War from a western perspective. Google Street View exploits it too but for different reasons. Zelensky said Chernobyl has been a negative part of Ukraine’s brand and The time has come to change this in 2019, which is baffling to me. Turning Chernobyl into a tourist attraction doesn’t really erase the negative impact, but this is one of the things that capitalism does: commodifies dissent, disasters, and dysfunction.