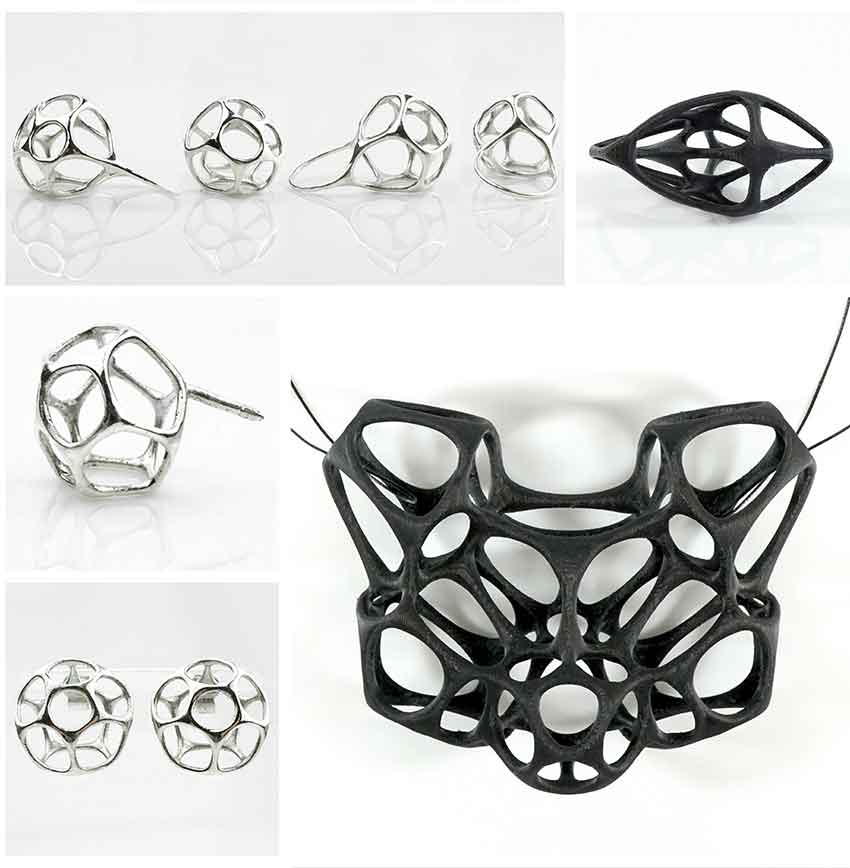 Dana Anton and Ionut Anton (IDZ arhitectura) have always considered that it is not enough to have beautiful images as a result of a computation process, whether it is design or otherwise. More than that, they strongly believe that is equally important that these architectural artefacts which are conceived using computation to be transferred into reality and one can do this with great precision by using digital fabrication means. The studio, IDZ arhitectura, came into being almost fifteen years ago with an honest aim to design architectural projects. As the years passed, they discovered a passion for projects that go beyond an ordinary architecture, in which computation and complex design with a lot of different parts can play an important role.

They started to be more focused on the materialisation of what they design and to shift as much as possible the control on execution to their side. So, they explored the use of machines that could produce parts of the design as close as you can get to a finished part. These parts were then to be assembled on site to form the architecture artefact they wanted. Recently, they have been commissioned to bring into reality the vision of Cluj based artist Ioana Olahut into a site-specific installation called Maelstrom, hosted at the Halucinarium gallery in Bucharest, Romania.

The installation, a reinterpretation of a maelstrom, resembled a branching structure envisioned by the artist as a series of metal plates bolted together. They started from the sketches of the artist and build their own 3d model of the installation that was purposely built for the space of the Bucharest gallery.

“We then employed a parametrically controlled form finding that modified the shape in order to achieve a perfect planarity of each quadrilateral face, at the same time maintaining the topology of the form. At the same time, we used a structural simulation of the same form with the aim to determine the thickness of the material to be used. Both the form finding and the structural simulation were paired in order to derive the final geometry of the installation. From that final geometry we extracted fabrication drawings for each plate and connection between each two plates. We used adjacency information and naming for each part that was engraved on the laser cut metal plates. With this information inscribed on the actual parts assembly was like solving a large Lego in which each part said with whom it must connect and how.”

A few years back, they took a financing opportunity and founded i{n}stance, a spin-off brand from IDZ arhitectura which focuses on digital design and fabrication for product design and jewellery by blending traditional craftsmanship and state-of-the-art technology.  The idea behind this project is an “instance”, which stands for the particular, the {n}th element in a sea of multiple possibilities, a specific occurrence which was deliberately chosen. i{n}stance is a brand which aims to create unique, individual products, by using algorithmic design strategies and digital fabrication. The i{n}stance jewellery pieces are an exploration of digital design and fabrication tools and how they can transfer a product from the virtual realm to the physical being.

“This exploration is an iterative process in which the logic of geometry is unearthed. Each new iteration is a new attempt of the virtual to be born into a physical manifestation. Each iteration is a lesson learned in how the material responds to digital inputs. In order to control the process, i{n}stance makes use of a cyclic workflow between design and fabrication, using parametric design tools, in which algorithms negotiate the form and the constraints defined by the fabrication process. The presented objects are the physical manifestation of the form-finding process, the search for the {n}th element, the search for perfection. The pieces explore the aesthetic interpretation of mathematical functions and progressions. Rigid geometry is transformed through parametric variations in order to become an ornament. The true beauty of the approach lies in the computational coding and digital fabrication. Using various methods of computational generation, different shapes are generated and permit the use of one or multiple materials. From all this, it is dictated which type of technology will be used. Either 3D printing, laser cutting, precious metal casting or robot milling are used, in order to transform the 3D model into a physical prototype. The digital experimenting branches into our collections, which we design and sell as they are, or into our customizable line, in which we permit the clients of i{n}stance to deviate from an existing design.”

The interest in “the use of computation in architecture and design” can be traced throughout not only on their teamwork project but also in their academic career. Their intent is to introduce parametric design and digital manufacturing technologies in the field of architecture, both in the educational environment and at the practice level. Therefore, “We are always trying to keep up with what is happening in this field worldwide, participating in international conferences, training and workshops. It is very important to present these new notions to students because we are responsible to prepare them for future practice.“

“If architecture education does not lead and gets closer to these fabrication tools, architects will lose this knowledge and will be limited to only what one or other fabricator can offer. On the other hand, if architects will become more involved in the use of digital fabrication tools, they can creatively use these tools to their own purpose and be able to make things that otherwise would be impossible to achieve.”

With this mindset, Dana and Ionut Anton wanted to bring to the students in Ion Mincu University of Architecture and Urbanism these digital workflows. At first, they started with an elective course for students of the 4 Th, 5 Th and 6 Th year with the goal of teaching students parametric design and familiarizing them with digital fabrication tools. At the end of the course, students developed projects in groups and fabricated them using 3d printing or laser cutting. The course had a validated success thought a large number of attendees who devoted their time to this extra-curricular activity and whose physical results represented by a series of digitally crafted models of parametrically developed objects were exhibited at the 2013 Annual Architecture.

“We noticed that students are receiving this knowledge with great enthusiasm. In the first phase, they are attracted to the complex geometry they can control, but as we have encouraged them to develop their own projects, they have been constrained to change their way of thinking. Our course tries to be more than just a software training and aims to equip students with a critical thinking method regarding how digital technologies that can be used in architectural practice.”

IDZ arhitectura has hosted several workshops in the last years. Each of them was a result of a practice focused on parametric design and digital fabrication, to empower participants with skill sets to design and fabricate objects. They were determined to bring their working methods and to accumulate knowledge to the architecture community. Therefore, they became McNeel Europe authorized trainers for Rhinoceros and Grasshopper, and they have developed an advanced curriculum for their courses.

“From our point of view, the most important are the prototypes made at the workshops that we led, which were exhibited at several events, including the Annual Architecture Exhibition. Because it is an experimental field, in order to conclude that it is relevant to the architecture practice, we need to show physical results.”

Each workshop has a very precise theme and is divided into two phases. In the first part, IDZ arhitectura teach the participants how to use parametric modelling and a particular workflow suited to the fabrication tool that they use in the workshop. In the second part, each participant develops an object of their choosing, with Dana and Ionut help and support. Afterwards, they fabricate all these objects in house, with IDZ arhitectura digital fabrication tools.

In this sense they enjoy Joris Laarman’s work with 3dprinting at a larger scale; Mark Fornes’s way of bringing very complex structures into reality using agents that ‘crawl’ on meshed and develop a digital web of complex shapes, that are cut into two-dimensional sheets and then form three-dimensional objects; The robotic fabrication research of Gramazio & Kohler; the way in which each pavilion explores a different theme with Achim Menges’s ICD or the subtle parametric like geometry in Issey Miake’s designs.