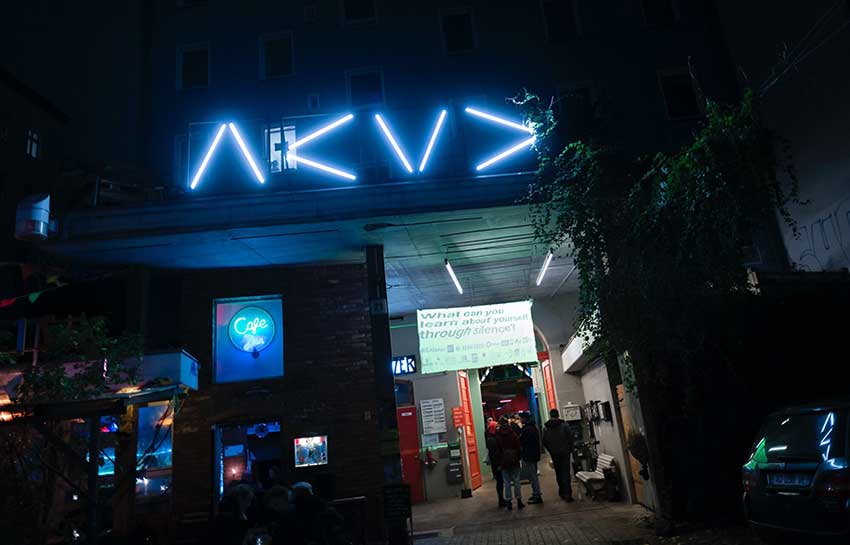 Collapsing the boundaries between science and art, making tremble the walls of Berlin’s Acud Macht Neu, Eufonia took place between 1-3 November 2019. The festival explored the medium of sound beyond the notion of aural aesthetic experience, dissecting the sonic as a solid thing, as well as recognising the intangible as intrinsic to human reality. Through talks, workshops, performances and a gallery display, this event of knowledge were enacted to collectively better understand the impact of sound on human flesh.

Eufonia emphasised the stimulating power of sound over the human brain. It has been the sound’s potential to affect the neural system, as the main concern that united the three creative minds behind this happening. The festival events highlighted sound’s vibrational influence on our being, perception of reality and ways of communicating with the world. The festival’s performative research was divided into four different, interrelated, and interdependent blocks of education, innovation, art and health. The feeling of urgency, curiosity and willingness to expand and improve the quality of the contemporary living were the driving forces behind the programming.

Eufonia’s phonic explorations foregrounded the fact that it is the frequency of vibrating matter that is the true power in the hands of artists in influencing our feelings. Even though impossible to be heard, sounds that are too high or too low for the human ear still do reach the innermost of our beings. Infrasound, for example, like that released by earthquakes or helicopters, is suggested by some to evoke feelings of awe and fear. Only recently have scientists been able to explain the sonic faculty’s secrets, by delving deep down into the inner ear. Sound healing has just become popular as an unconventional medical practice, though used for centuries in cultures like the Aboriginal peoples in Australia and Tibetan monks. At Eufonia one could experiment with the relaxing resonance of a tuning fork while participating in the talk by acupuncturist Sarah King. The festival used conventional ways to better explain the phenomenon of hearing too. Creative researcher Florence Razoux, for example, performed an anatomic lecture, pointing at a blackboard covered with her chalk drawings of the cochlear nerve and the built of the inner ear.

So crucial to corporeality, the ear is not only the organ enabling one to hear but also the location of the sensory system, an integral element in sensing of balance and spatial positioning. At some points, I found Eufonia as an incapacitating maze itself, both literally and in its metaphorical meaning. The programme was dispersed across different levels of an old apartment building, simultaneously having felt like a suffocating mesh of body memories; like a strangling web of aural affects. Traversing the building’s system of stairs, one was also given a chance to unconsciously return to where it all once started, having found oneself in ‘Womb’, a sonic installation by Debbie Chia. As if a foetus released for the first time from the embryo environment, one rushed down the stairs straight into the open air. Through a balcony, having descended the stairs in allegro steps, outside and straight through glass doors on the other side of a closed patio, hardly breathing one entered a bright-lit white-cube gallery.

The exhibition space invited one not to look, but rather to sit down, sink in and sense with the tingling skin. SUBPACK, a tactile audio system, for example, quietly and directly transfers low frequencies to the user’s body, underscored the fact that to listen to means to also absorb the sonic through the porosity of the cellular corporeality. Distinguishing different layers of immersion and reception of vibrations on the skin surface, in muscles due to tiniest changes of pressure, and through bones that lead to the inner ear, where the phenomenon of hearing comes into being, SUBPACK was there to highlight the innovative uses of tactility of sound, already employed in practice by music producers.

Sound would not exist without matter, which mediates it as an audible wave. Sound is touching us with vibrations permeating the skin boundary. Human body, enlivened by outside forces, would not be moved without energy flows intersecting its muscles and bones. Providing the physical dimension to hearing escalates the listening experience, nevertheless sound as the vibrating matter is an entirely physical event, to those who are deaf. During one of the panel talks at Eufonia, Troi Lee shared his experience of being a founder of Deaf Rave. As vibrations travel all around the room with a proper sound system, via the floor and any hard surfaces, even though most of the participants in those parties cannot hear, they experience the low frequency sounds even more intensely, due to their heightened haptic sensitivity.

To both listen in and to silence suggests turning inwards and it was choreographer Gosia Gajdemska, who led a workshop, exploring how to listen to our body and to feel the inaudible through tuning in to our breathing.

During the debates between artists, scientists and medical practitioners the most important question that Eufonia in its explorations of sound has raised was exactly the one about silence. Immersed in the sonic pollution of the modern-day, how can one tune in and be able to resonate in harmony?; how can one understand silence, as a conscious mental activity?; or how can one actively listen, being aware of the constantly morphing relationship between the self and the other?

Perhaps, the scientific notion of natural frequency, every particle’s inherent quality, could help if first underwent a philosophical inquiry and later applied to social sciences for us to better understand what it means to live in sync. It is the concept of resonance, that will lead us towards living wholeness in diversity. However, the contemporaneity’s task is to learn how to vibrate in resonance with objects not only with the same natural frequency but most importantly to learn how to adapt, though the art of listening, to then know how to respond to various signals from the outside, with frequencies that match each other and let us resonate with the surrounding environment.