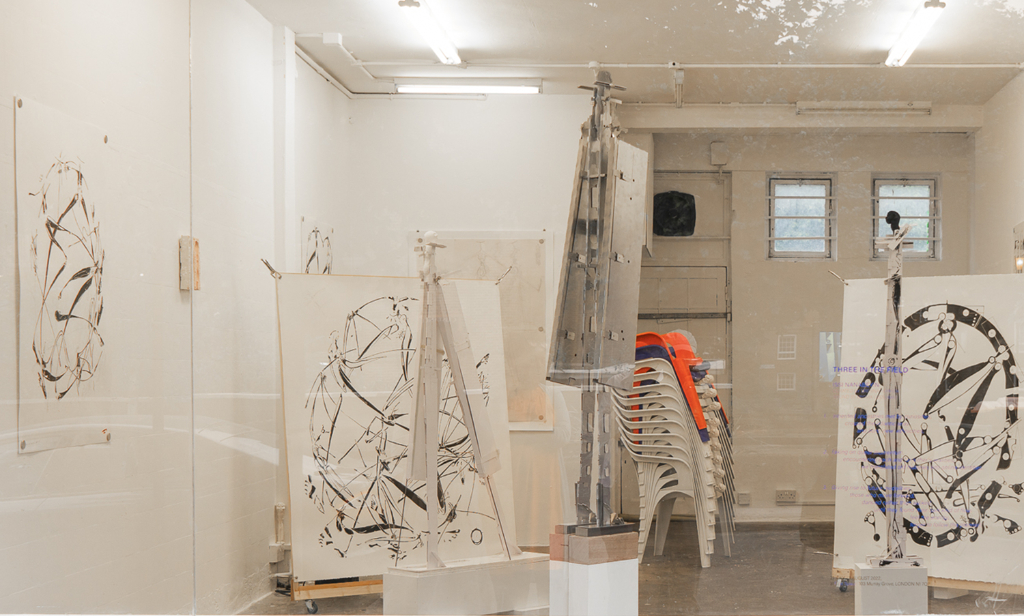 London-based artist Issi Nanabeyin is trained in Architecture. He holds an Architecture Bachelors and Masters at the Bartlett from University College of London. So being influenced by architects’ drawings has become fundamental to his artistic practice. I saw Architecture as drawings. I found the initial sketches, drawings and pre-work of architecture provocative, especially those that seemed ‘unfinished’ as they gave space for multiple interpretations. From Raimund Abraham’s ‘House for Eluicd’, Lebbeus Woods’ ‘War and Architecture’ to Walter Pichler’s ‘Composition Figure’, I spent most of my architectural education trying to understand drawings instead of the buildings.

Now, this has developed into architectural, visual and digital drawings that can tell the ‘unfinished’ stories of the diaspora. Issi’s work builds the diaspora’s identities into (digital) forms, visuals, photography and spatial interventions. His work dwells on the narrative of hybridity and the diasporic, tracing these narratives from the field of cultural studies across race and into the territory of architecture.

But what are the main mechanisms belonging to the architecture that Nanabeyin aims to address or react to through his artistic work? The inability of architecture and its pedagogy in the UK struggles to see the imagination beyond the western world, Nanabeyin explains. As a result, I find myself referencing other types of creatives for most of my work. For Three in the Field, I heavily referenced the writer James Baldwin, the curator Ekwu Eshu and fashion designer Wales Bonner. I was able to translate or interpret their work through a spatial lens. These mechanisms have a spatial description of architecture that I want to manifest. In short, Three in the Field was me trying to display architectural work that isn’t bound to only (re)addressing the problems of Britain’s history but instead imagines a future landscape or materiality. No politics, Pure joy, let’s say.

Three in the Field is Nanabeyin’s latest solo exhibition. Curated by Brenna Horrox and sound by Ijeoma Uzokwu, it was on view until August 1, 2022,  at FILET Gallery in London. According to the exhibition’s statement, Three in the Field is a refusal to accept architecture as singular or stagnant. Instead, it is a recognition and a manifestation of the fluidity in which diasporic life has built into the spatial structures around us—illustrated by a coming together of Issi Nanabeyin’s architectural, ancestral and digital practice to tell stories of and for the diaspora. The stories explore visual streams of representation that live within the contemporary experience and embodiment of ‘Black’ identities meeting ‘British’ ones. I guess my work is facing towards an architecture or visual language that speaks of a diaspora’s contemporary experience and embodiment. Nanabeyin reflects.

When we asked what the title Three in the Filed stands for, Nanabeyin told us Three is resistance to the idea that identities are singular or even binary. It was a didactic way to suggest another way of understanding the diasporas’ identity. One part is inherited ancestries, another part is being a resident from another culture, and the third is something else completely, one that is self-actualised, one that can be as temporary as a single day or exist online. Three also has a symbolic relation to theories around the third eye, bringing us back to this provocation to live out of your imagination and how this can be a more accessible place to create from and reside in. And ‘Field’ refers to the field of architecture and the ‘field’ of culture – sowing, reaping and harvesting the raw sustenance needed to create a language for the diasporic identities.

Issi Nanabeyin has collaborated with the sound artist Ijeoma Uzoukwu to create the spatial soundscape ‘Ether’. It was made of the sum of two parts, ‘05:08’ 2022 and ‘21:05’ 2022, with a distance third part ‘, People Carry Place’ 2022. The soundscape explores the sonic relationship between ‘Blackness’ and Metal and the constant tinkering noise that carries through it.

Ijeoma Uzoukwu is a non-binary, London-based Nigerian artist making space for collective introspection through performance, moving images and sound. Ijeoma’s multifaceted practice is similar to Issi Nanabeyin’s in the sense that it dances between their identities and speculative forms. By working with an Ijeoma to make a soundscape, the movement within the sculptures and drawings was able to expand out of their structural form to enter the field that was the space. Nanabeyin told us about how was the experience of working with Ijeoma Uzoukwu.

Three in the Field is a non-western/black-British/diasporic way of understanding architecture using materials such as dance and sound that might not be understood as traditional building materials. You can convey this through sound. By working with an Ijeoma to make the soundscape, the movement within the sculptures and drawings was able to expand out of their structural form to enter the field that was the space. Issi Nanabeyin says to explain how they completed each other.