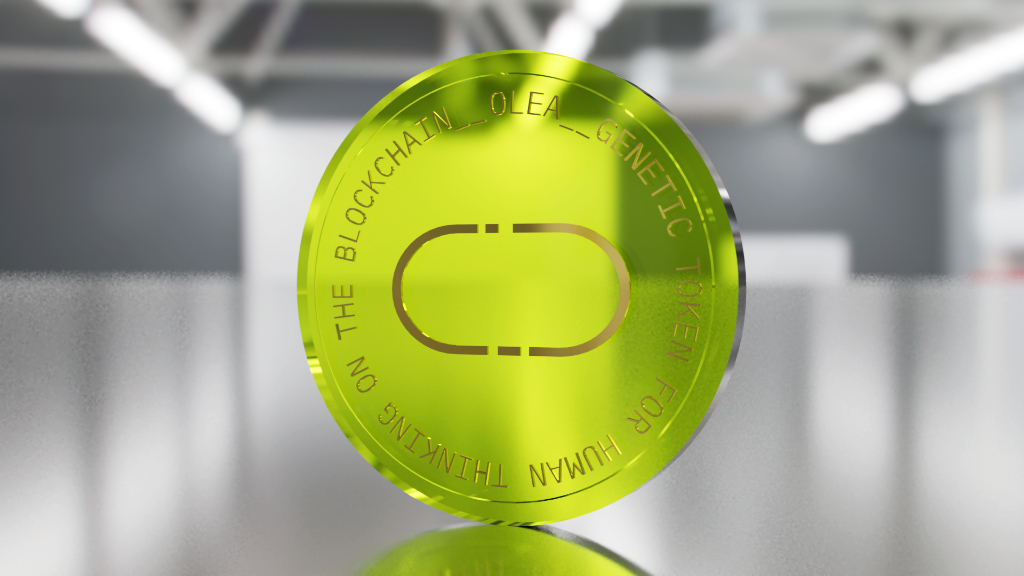 OLEA is a unique olive oil, fruit of the development between different disciplines and coordinated by artist Solimán López in collaboration with the Twist Bioscience Laboratory, which has been in charge of the DNA synthesis of the smart contract for the OLEA cryptocurrency. OLEA will later be encapsulated in Silicon Dioxide to be incorporated in a limited series of 1.250 litres of olive oil.

Those will be the physical image of something that does not exist in physical form. For example, a blockchain is a series of binary codes that consist of code packages known as NFTs (non-fungible tokens). NFTs are unique and add value to digital objects like cryptocurrency or digital art pieces. For example, 2021 was when the first-ever nonphysical art piece was sold for 69 million US dollars.

In Spain, Solimán López was the one who first sold an NFT certified piece of art. So, how does López envision the future for digital art? We asked. Until a few years ago, the world as we understood it was based on the consumption of tangible goods. Our future is based on the dematerialisation of everyday life, or we are lost. I have the feeling, and perhaps COVID-19 has been a trigger, that the acceptance of the intangible is more vital than ever, and we understand that digital assets have the same value as physical ones. Digital art arrived years ago, but it didn’t have access to the mainstream, guaranteeing a social insertion. Its evolution will depend on the artists’ understanding of technology. We have an important responsibility in positioning our artistic production in art history. López shared with CLOT over Email.

With OLEA, he combines the digital future with the analogue past. Olive oil, historically related to deities, abundance, health, and liquid gold, is the host of the DNA added to it. The properties of olive oil coexist together with the molecular synthesis of the code that gives life to a cryptocurrency in blockchain environments. This DNA is synchronised with a binary code, a blockchain.  Genetic alteration, artificial construction, and the coexistence in hybrid spaces configure a new ecosystem of ethical, religious, political, and social thought that through this project aims to molecularly link techno-political structures, cryptography and decentralised models of thinking and economy.

My aim with OLEA was to unite two historical economic spaces physiologically. On the one hand, the blockchain economy and its decentralisation through cryptocurrencies and the other one,  the oldest economy of humanity, agriculture and the extraction of resources from the earth.

To achieve this purpose, López devised a project that contemplated the basis of both worlds in a single liquid space. That is why we synthesised the smart contract of my OLEA currency into DNA and introduced it into olive oil. The result is an oil that contains a DNA molecule that, if sent to the laboratory, shows us this smart contract that governs the conditions of the digital currency. With this liquid, I generate a series of physical and plastic works, installations, sculptures… and, of course, digital works like NFT that represent the occupation of the OLEAS in the space of the virtual and the metaverse. López continued.

Solimán López combines 3D techniques, electronics, software programming, artificial intelligence, virtual and augmented reality, and digital synchronisation in his works.  He develops his artistic production in Paris, France (UAS, Updated Art Studio) and ESAT LAB, Innovation department that he runs at ESAT, Escuela Superior de Arte y Tecnología de Valencia, Spain. He is also the founder of the Harddiskmuseum, a museum of digital archives conceived in 2013 and patented a year later that has established itself as a cultural entity with its personality. At the Harddiskmuseum we have been storing digital archives for almost eight years. Those archives are the ones tokenised on the blockchain for millions of dollars. López explains.

He is a clear advocate that the separation between the digital and the biological does not exist. We are in a period in which we are beginning to understand that everything is part of the same coded nature. The digital and the analogue today coexist more than ever in the same physical space that not only occupies the space of the screen but has also become part of our gaze.

My exercise today is to try and see the world as a newborn, like a baby just out of the womb. It is an evolution as an artist, but at the same time, an involution as a body that deteriorates with time… and the fact is that time in the digital world doesn’t exist. It is invented. López reflected when we asked him about his evolution as an artist since we talked last time two years ago, just before the world went into lockdown and our perception about our physical worlds (or “virreality”, a term that López uses to describe the notion and change of understanding of what we traditionally have called “reality”) changed forever.