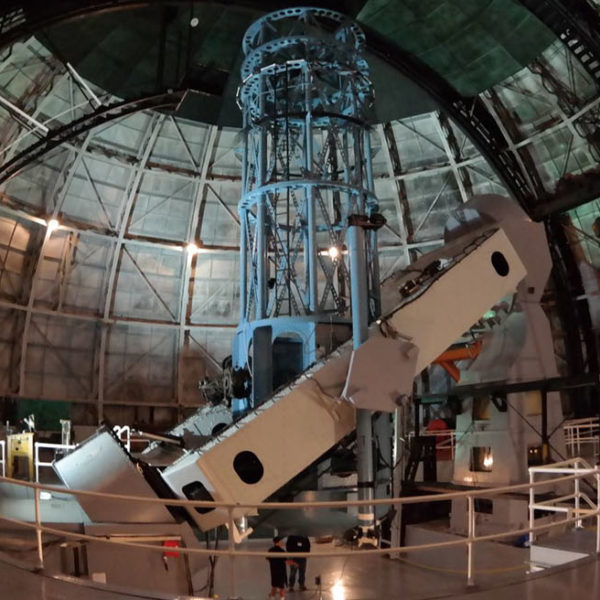 freq_wave (Pacific; Los Angeles) is an immersive installation by pioneering new media and conceptual artist Carl Michael von Hausswolff, who has transformed the interior of the 100-inch Hooker Telescope at Mount Wilson Observatories in Los Angeles with a visual and sound installation aimed to make us reflected in the depth of the oceans.

Responding to shifting vibrational frequencies within our warming oceans, the work is an urgent call to action that will transport public audiences through a tactile aesthetic experience that forms an intimate connection to nature through art and science. freq_wave (Pacific; Los Angeles) is a critical and timely response to the planetary crisis wrought by the Anthropocene, the “human era” in which our species has irrevocably transformed the ecology of the planet. The installation is part of the Fulcrum festival, which this year is dedicated to the depths of both oceans and space.

We asked CM von Hausswolff how he saw the connection between the current environmental crisis and our human obsession with the search for life in space; CM described the human quests and emotions as Humans (we) have been and are obsessed with mastering the universe – from microcosmos to macrocosmos. Apart from the fact that we greedily exploit the Earth’s all lucrative possessions – until there’s nothing left for us to use – we have already – since Gagarin or why not since Pythagoras – started to exploit the surrounding solar system and beyond. Tons of garbage is being dumped in the ocean, and tons of garbage are in orbit around the earth. The crisis that we have created is not limited to our planet but is also starting to be noticed in space. For him, the connection is very clear.

He also shares that the installation tells the interested audience that artists (and here: the artists involved) are aware of this crisis and that we stand up trying to do something (even if it’s a small part). The prime matter with this work is to inform the audience (and others that read about the work) that we’re concerned.

freq_wave was first presented by TBA21-Academy in 2020. It began as a web-based project that invited 84 sound artists and composers to use hydrophone recordings to make the complexities of marine degradation and pollution audible and to bring attention to the delicate soundscapes of the sea.

For the 2022 iteration, the artists are using the Pacific Ocean as a site for sonic research. Additionally, the 100-inch Telescope provides a unique home for this project, as it illuminates connections between our ocean-based environmental issues and the current search for water, and life, in space. The project brings together twelve individual sound works by twelve artists, each operating within a unique frequency range based on field recordings from the Pacific Ocean and amplified to act as a single, generative sonic zone.

Similarly to the same curiosity and awe the depths of the oceans sparks in us, space observatories are quite magical enclaves, places for connecting us to the majestic skies and ulterior extraterrestrial existence. The visual part for freq_wave pacific comes naturally from the venue; it is very visually specific. The curatorial team discussed the various proposals for the visuals – we cannot have it totally dark, and at the same time, I don’t want the visuals to conquer the sounds. The visual part has to be coming or informed from the sonic concept. CM von Hausswolff explains. But this work is, first of all, a sounding experience, so nearly all focus will be on the sonic issues. CM von Hausswolff makes an interesting remark: nowadays, sound installations have been adopted mostly by institutions that show visual art: Museums, Kunsthalles, galleries etc. – the “serious” music world is a bit behind, still focusing on concert halls and so on … sound-art has, since the late 1990s, become the new visual art!!

The participating artists (Greg Anderson, Jana Winderen, Minoru Sato, Jimena Sarno, Bethan Kellough, Tom Recchion, JG Thirlwell, Alba Triana, Jónsi, Lawrence English, Yan Jun, and Richard Chartier) were chosen by CM von Hausswolff and Robert Crouch, director of Fulcrum arts. All but one of the artists have a connection with the Pacific Ocean – most of them live on the US west coast, and others are based in Australia, China and Japan. Then, It is up to the invited artists to figure out as they’re the ones who equalise their contribution down to the specific frequency range given to them.

Lawrence English, one of the participant artists and probably well known to our readers, shares that this iteration is particularly special as it resonates so strongly with the ocean, gravity, currents and waves themes. From a conceptual standpoint, what I think is so powerful about this work as a metaphor for concerns around marine degradation is it speaks to a kind of stratification of the environment. Each layer in freq_wave is bounded by a high and low point. This perhaps describes how most of us think about the ocean – as a single layer or environment. The ocean is not singular, though, but many different environments co-exist in that aquatic atmosphere. When all the sound elements are combined in Freq_Wave, all of the frequencies are present, and at that moment, the complexity of that oceanic environment is spoken to. I think it’s a wonderfully poetic expression of this idea and also a perfect reflection of Fulcrum Art’s festival, which seeks to map out the interface between science and art.

Minoru Sato, another of the participant artists, points out the relationship of Japanese people with the send ocean. Japanese love the sea, especially beaches. We go there to refresh and relax. On the other hand, they experienced a huge and devastating Tsunami in 2011, which engulfed several towns, killing over 20000 people.  It was an immense tragedy for japan and its people. But Sato also says that this is nature. We human beings can not control it; we are just a part of it. So our basic «desire» – perhaps it should be better for us to call it spirits of inquiry, is to explore and to try to know and understand nature well more than we do now.  The overloaded or excess of social order is leading our desire in a different direction. As a result, ocean pollution, climate crisis and other ecological matters are very serious today. He deeply hopes art project such as freq_wave redirects us to explore the essential unknown.

Apart from the installation, some of the artists will be performing some of teh pieces. English says that For the performance, he was very interested in expanding his exploration of the themes and also utilising the very unique sonic architecture of the Mt Wilson Observatory. He’s prepared a special version of his piece ‘Oseni, which was created earlier this year and which raised money for the Kingdom of Tonga following their volcanic disaster. The work is a mediation on the Pacific Ocean from many vantage points; Australia, New Zealand, Japan and North America, amongst others. The piece will be diffused in a type of surround sound system, creating a sense of the ocean coming from within the observatory. This will be the first time I realise the work in a performance setting, and I’m greatly excited to share it.

Sato, on the other hand, says his art pieces generally deal with a physical or actual thing. For the freq_wave project, I was making mimesis of the ocean from actual phenomena in a conceptual way. He also thinks his performance should have both sides – conceptual and physical. At this time, I have a conceptual idea of the composition -i.e. I’m using my original 25 scales based on Pythagorean tuning, also known as ‘sanfen sunyi’ of Chinese music theory. It was thought of as “The Music of the Spheres” in ancient days. At the same time, thinking I’m king to manifesting some physical phenomena of wave interferences as my attitude towards art.

One last reflection of the long-term project was that it draws attention to the crucial issue of the environmental crisis caused by the Anthropocene. How do you see the project’s future development? And what is the exceptionality of such initiatives at the intersection of art, culture and science when it comes to addressing problems of climate change and building people’s empathy for the natural world? We asked CM von Hausswolff.

It is necessary that we artists show that we don’t want to be a part of the exploitation of the ocean, including over-fishing, pollution, deep sea mining etc. I think we have to show that we want to collaborate with the ocean … with the world. Again I say that this is a small work of art telling a small part of the world that we’re concerned about and that might inspire people to change their lives and, with this, their behaviour. I hope to do this all over the globe where we have oceans and lakes – I live by the Baltic Sea, which is the most polluted sea in the world … people believe that Sweden, Finland, Germany etc. – countries that use the Baltic Sea – are such clean nature-friendly nations, but this is wrong. The latest gas transportation line from Russia to Germany that runs over the bottom of the mentioned sea is just one of many abusive things, von Hausswolff said.

CM von Hausswolff continued I also hope to create installations that contain the other elements – Fire, Air, Earth …. in order to also involve air pollution, problems with the ozone, increasing man-made forest fires,  brutal agriculture and deforestation etc. It’s easy, nowadays, to just give up as the end of civilisation, as we know it, comes nearer, but human beings are a strange animal that, even if it massively kills other species and life forms (including him/her-self), we also have a gene that wants to live in harmony … I don’t want to give up that idea.