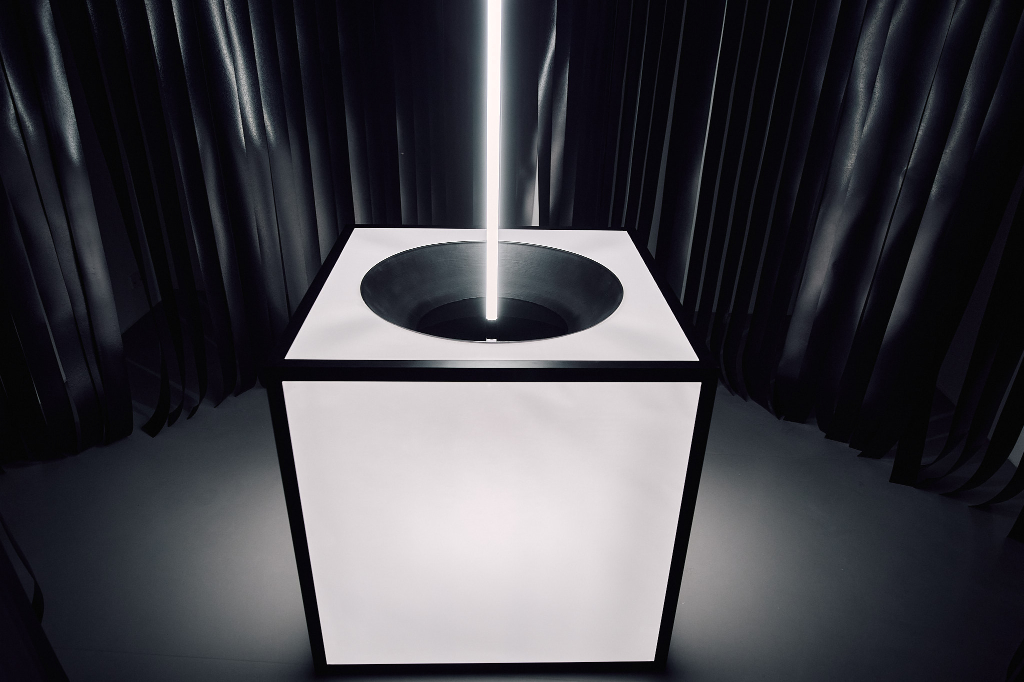 The EMA Expo program is dedicated year after year to the modern interdisciplinary dialogue of the arts and current topics of the social agenda to explore media art, sound art, audio-visual and digital art. Organised by Köta since 2016, the platform this year brought together curators Peter Kirn, Gleb Glonti, and Anna Titovetsto to curate an exhibition focused on the concept of «superfluidity.» Since 2011, kotä has been curating and developing innovative projects in the field of sound-art, music composition, media, and digital art, organizing exhibitions, educational programs, workshops, and music events in various cities of Russia and Europe.

The exhibition was built by Bureau Logic. Founded by Andrey Yanshin in 2015, the Bureau Logic approach looks for the most efficient solution to any problem with the most simple tools. Since 2015 they have completed over 130 projects in different areas, from global urbanist concepts and urban planning projects to finished signature public structures and infrastructure projects. We have in common with the metamodernism philosophy the structural analysis and the combination of approaches to solving problems. We call such solutions « logical », and if we were to describe our creative process with one word, it would be LOGIC. Explained Andrey Yanshin.

When asked about the intellectual process, curator Peter Kirn told us he looked for how artists transformed themselves through media. He realised that the idea in theoretical physics originated with scientists working in Soviet Moscow. But it’s so easy to be trapped in this naïve narrative world – especially in technology – of some twisted brew of Hegelian dialectics, Hollywood multi-act plot structures, and snake-oil hucksterism. Imagining superfluidity is a chance to conceive limitless change, liquid helium or the murmuration of flocks of starlings. In moments of self-doubt, we all think of our human selves as being rigid and brittle, but maybe when we flock together, we can change direction in an instant, like those birds. Kirn added.

I’m observing partition, segregation, alienation, prejudice within us first, then broader to our society, then broader to our countries. I want to talk openly about it. Gleb Glonti told us. His idea was not to speak about technologies but to talk about selfishness, fears, time, bias, authority using the modern language that young people would love to listen to. This project is international. When we are about to be split by authorities into both sides of the border, I want us to build bridges of empathy through the language of art. Glonti remarked.

But what is it? What is “superfluidity”? We shouldn’t take it for granted, they asked. For Gleb Glonti, “superfluidity” is time -the substance, almost conception, that flows through us. We can distort the time that passes through. Hence, we generate distorted meanings that are followed by distorted deeds. We can let time flow freely and clearly through us when we are in the state when our mind doesn’t generate distortion and segregation, but integrity. Here I recall the monologue of Willem Dafoe about time from Wim Wenders’ ‘Sky over Berlin.’

The exhibition is built on one installation flowing into another. Vertical black plastic partitions separate the installations themselves with vertical cut-throughs where the people would pass. This plastic film resembles a ferromagnetic fluid that has invaded the whole building of the museum. This is the second concept of superfluidity. The third reference is in the flowing of the principles from one area of creativity into another. Andrey Yanshin told us.

When designing the exhibit’s architecture, it became clear that the main accent in the architecture would be the graphic design – the appearance of the navigation between the floors and the bilingual description of the works. They used architectural design to create the layout of the leaflet and the text. We created wall layouts for where we planned to place the text and made an internal scale for people of different heights, selected a single area where the text would be comfortable to read horizontally, and then placed the most crucial information on this axis. The translation was put above and below. This way, we create a design that was esthetically very simple, but the usability was thought through, which showed how the digital world flows into the physical reality. He continued.

All the artists they have assembled all tackle what we describe as ‘superfluidity’ – redefining their artistic identity in new shapes amidst societies and electronic media in a crisis. Among the participating artists, we can find the likes of  Aebersold x Handberg, !Mediengruppe Bitnik, Roman Golovko, Lucas Gutierrez, Sergey Kostyrko, Sara Culmann, Byrke Lou, Mikhail Myasoedov, Anna Titovets Intektra, Boris Shershenkov.