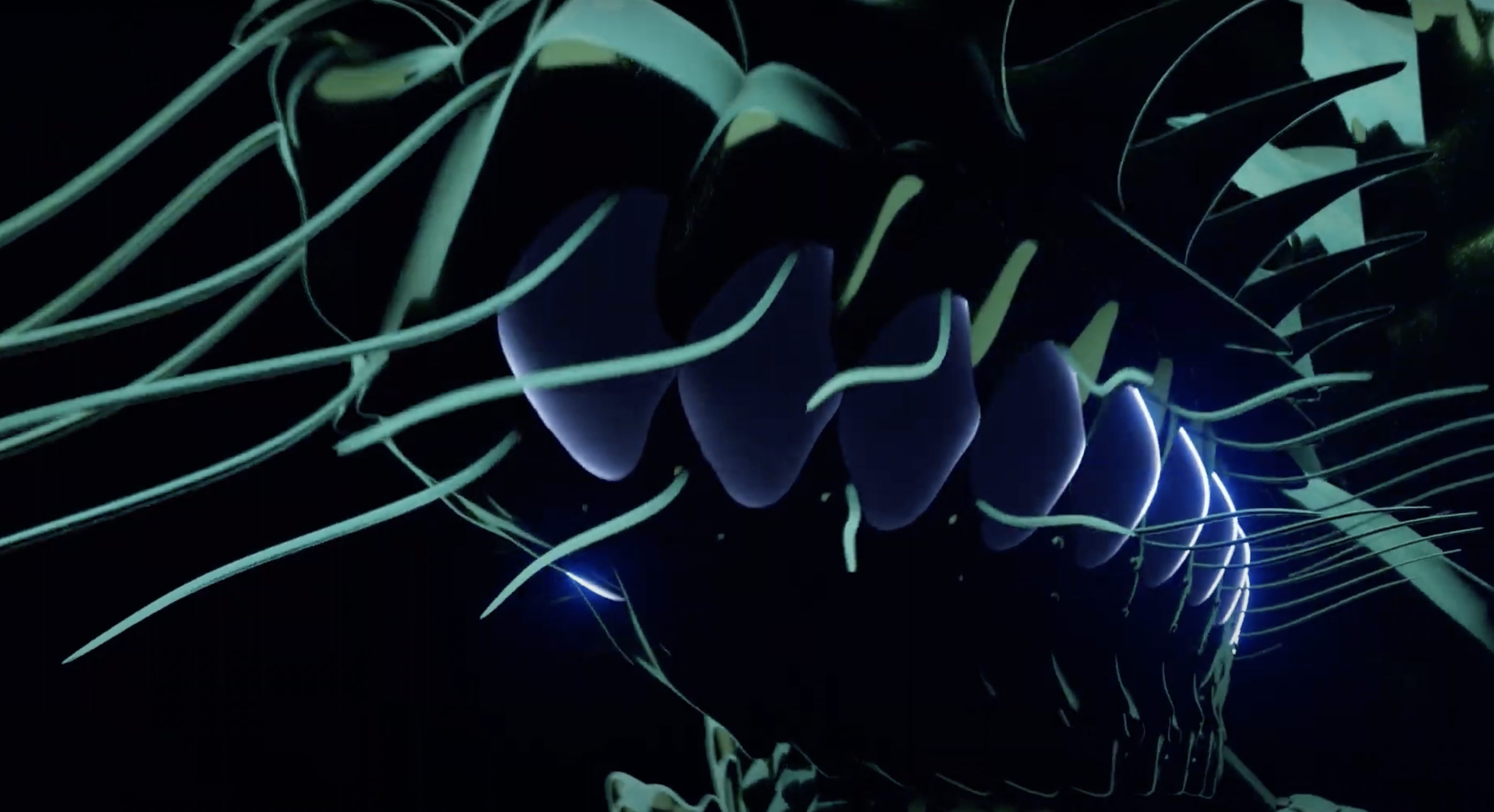 Maxime Primault is a French musician who has generated many projects over the years, including Black Zone Myth Chant (or BZMC), originally described as «Sun Ra meets Dj Screw». Originally started as a reminder of his first steps with a sampler, a decade earlier, Black Zone Myth Chant became one of them. Built from an alloy of Hip Hop beats and experimental sounds, this vessel allowed the artist to venture into different and darker territories.

The shapeshifting producer has seen notable releases on labels Low Jack’s Editions Gravats and Félicia Atkinson‘s Shelter Press. While his myriad of monikers have led him to master various genres on the psychedelic tip, in particular his psych-drone alias High Wolf. For his recently published latest production – The EP IN D EV IL (Winged Sun, 2021) – he has joined forces with Vica Pacheco, a sound and visual artist originally from Oaxaca, to produce a haunting video for one of the EP tracks.

The video shows what it looks like biological structures and organisms, from something resembling a trilobite to 3D representations of proteins/blubs, to a sort of alien-looking insect.

When asked how the creative process was for this collaborative project, Vica shares that she thinks her creative process is always to give some narrative sense to whatever she’s illustrating. In this case BZMC track: I imagine creating a 3 chapter evolution of some being, rhythm by Max music. For this video, she used Blender, she continues, an open-source 3d program that she uses for all her visual work. The advantage of using Blender, she says, is that it gives the freedom to dive into cartoonish looking, to the hyperreal; and therefore allowing her to adapt to the vibe of the music she’s working with.

While Max says he’s known Vica for a while and he loves how she works with 3D, so the collaboration happened naturally. Moreover, max also love Vica’s music so he was certain they would understand each other on every level: I showed her a bunch of videos I liked to give her an idea of what I was looking for. She came up with the narrative idea and then there’s been a bit of back and forth to nail the aesthetics but it was mostly detailed, as I was immediately really stoked and impressed with what she showed me.

Asking about some of their inspirations and the biological nature of the illustrations, Vica shares that her visual works are deeply inspired by nature and scientific images and biological illustrations:  I was reading at that moment Metamorphoses of Emanuele Coccia and I think I wanted to work around that and it was interesting to do it over a quiet clubby soundtrack. The idea was to metamorphose a character, which indeed was an alien-looking kind of insect, the moments of intensity were given by the music, as I was trying to give a narrative path to the whole idea.

For Max, this idea of metamorphosis worked really well for his music, but he didn’t really want for it to be too obvious, and more like a bit mysterious: I didn’t want to give too many figurative images for that music, you can understand it when you see the record cover. I like to operate in a zone between reality and abstraction, musically speaking, so it wouldn’t have worked if it was too real in the video. The way it is is great, it’s not a conceptual video that cares only about the aesthetic, but it’s not only purely narrative, it’s both, which is exactly where I like to be.

Website https://blackzonemythchant.bandcamp.com/album/in-d-ev-il-ep
(Video and image courtesy of the artists)