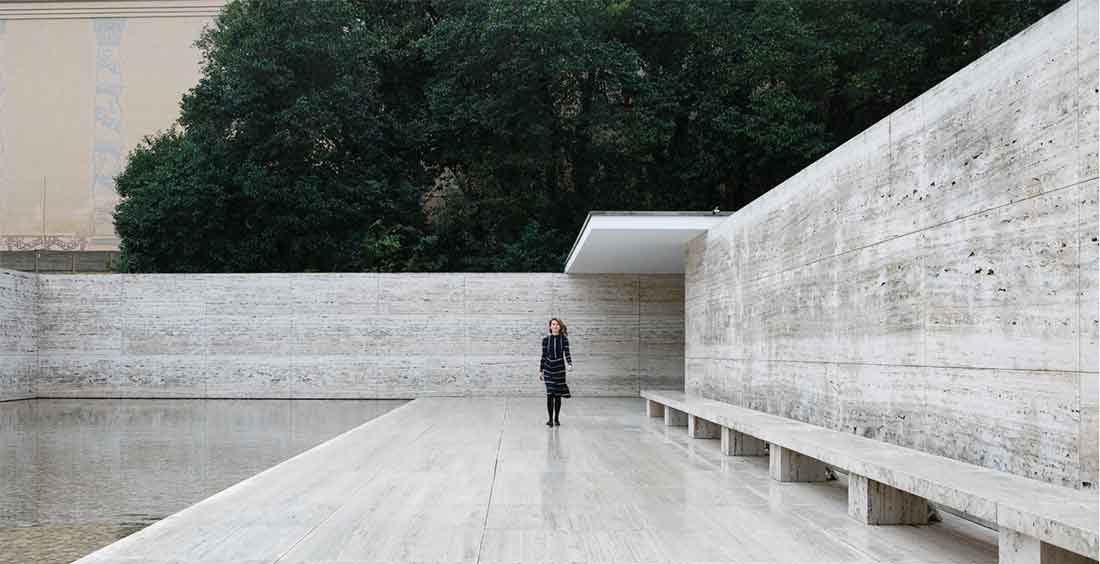 Artist Katarzyna Krakowiak creates sculptures, sounds, sound compositions and situations, all of them to find languages to describe architecture. Her latest project is a new structure, both architectural and linguistic, in the Mies van der Rohe Pavilion in Barcelona.

Emerging out of the recent lockdown, this innovative experiment adopts the form of a sound composition that will become a voice of our life lived together, a question about the current state and future survival of our community, its openness, freedom and creativity.

The Mies van der Rohe Pavilion is an iconic piece of architecture that was designed by Ludwig Mies van der Rohe, and Lilly Reich as the German Pavilion for the Barcelona International Exhibition held on Montjuïc (Barcelona) in 1929. It’s an emblematic work of the Modern Movement. Built from glass, steel and different kinds of marble, the Pavilion was conceived to accommodate the official reception.

When curator Marcin Szczelina received the invitation from the Mies van der Rohe Foundation the first thing he thought was he wanted to find a new language, a new narrative about design and architecture through sound.

We are living in an era of numerous protests; the global situation causes not only loneliness or sadness, but also anger. I’m interested in the shadow space between the words – the space for reaction, and in a situation which is not planned and organised.  Krakowiak views architecture, especially amid the current global crisis, as continuous, an imperfect verb, its activity and role never accomplished. She transformed the Barcelona Pavilion into a site of enquiry about the new beginning of a structure of the language of architecture and the architecture of language with contributions from hundreds of people from all over the world that have submitted their chosen word.

This project is not about life; it is life itself. And I feel alive when I’m laughing, so my word will be “laugh”. Told Katarzyna Krakowiak when she was asked to choose a word.

After Barcelona, the project is travelling to the Royal Academy of Arts in London where architectural and linguistic spaces of translations will be built, a new way of leaving?