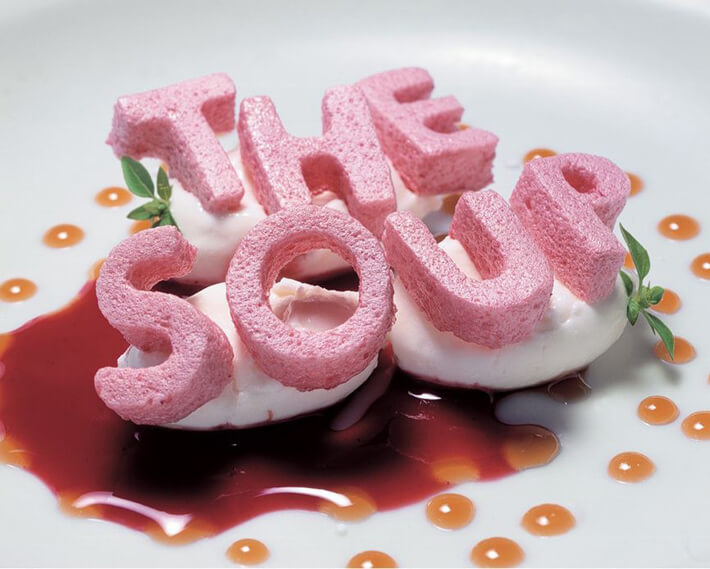 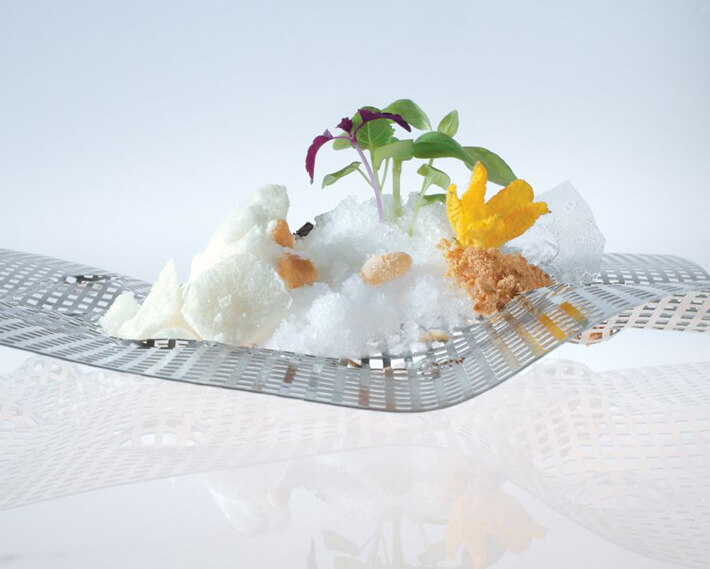 There is a very particular set of characteristics of Catalan people, what we call “el seny i la rauxa”. Seny is a form of ancestral Catalan “wisdom or sensibleness”. It involves a well-pondered perception of situations, level-headedness, awareness, integrity, and right action; a kind of refined good sense and self-realization. The opposite of seny is known as rauxa “a sudden determination or action, an irreflexive and creative impulse that directly attacks the calmness of seny“.

A few years ago, in 2009, the Centre for Contemporary Culture of Barcelona (CCCB), presented “Illuminations. Visionary Catalonia”, an exhibition about the visionaries, creatives or “arrauxats” (touched by rauxa) whose legacy opened the doors of modernity in Catalonia. Prominent figures in the arts and literature, science and thought: from Ramon Llull (one of the most prominent European writers, philosophers and scientists of the 13th century), to widely renowned personalities like Salvador Dalí and Antoni Gaudí.

Is in this list of visionaries where we would find the genius of Ferran Adrià, who is probably the most influential chef of our time. Born in el Prat de Llobregat (Barcelona) and starting his career as a cook during his military service, Ferran joined elBulli (the restaurant in Catalunya’s Costa Brava that catapulted him to stardom) in 1984 as a chef. And, in only two years, he was promoted to the position of head cook. There, he pushed forward the most transformative and avant-garde cooking. elBulli earned three Michelin stars and was voted the top restaurant in the world for a record five times (in 2002, 2006, 2007, 2008 and 2009).

Many have described the cuisine of Ferran Adrià as molecular gastronomy, a term he prefers to distance himself from. Despite this, his kitchen is filled with laboratory instruments, reagents and protocols: centrifuges, liquid nitrogen, agars, spherification, gelification. It is also the core concepts on which Ferran’s team base their practices – reflection, technique, methodology, innovation, research, teamwork, multidisciplinarity- along with an insatiable thirst for curiosity and experimentation that brings him even closer to one of these molecular scientists trying to decode the secrets of DNA.

Instead, Ferran Adrià has referred to his cooking as deconstructivist. When it comes to food, deconstruction – which finds its roots in literary criticism and is a nod to the term coined by French philosopher Jacques Derrida – refers to breaking apart elements traditionally combined to make a dish. Each component is treated (cooked) separately, allowing a transformation in form and texture to be combined later during the plating and presentation (we could have lengthy discussions about whether deconstructive cuisine finds an analogy to certain scientific disciplines or methods).

This idea of deconstruction in cuisine can seem quite surrealist. Surrealism is a cultural movement that began in the early 1920s, with one of its most prominent figures being Salvador Dalí, who was born just a few miles from elBulli. Adrià has pointed out in interviews that he is a fervent admirer of the painter’s work. In so doing, his cuisine takes up ideas and inspiration from surrealism and XIX-century Catalan visionaries like Antoni Gaudí. Remarkably, one of the chef’s first dishes was Salmonetes Gaudí (red mullets Gaudí), which resembles the famous tile “trencadís” that the architect is so famous for.

Adrià’s deconstruction, like surrealism, challenges the norm, takes an alternative view and uses the element of surprise and unexpected abstraction to the point of the absurd, confusing and unpredictable. Rejecting traditional cognitive mechanisms, both replace these with anti-conventional thinking. With creations like Pollo al curry (chicken curry), Adrià first deconstructed dish, and Sopa de Letras (alphabet soup) Deshielo (ice melting) where he becomes his most fun and playful.

Adrià closed elBulli as a restaurant in July 2011. But in his own words,  “elBulli never closed; we just stopped serving meals.” Since then, he has worked with his team to develop elBulli Foundation. The foundation’s first project will be to produce a massive compendium called Bullipedia, which seeks to gather all knowledge about ingredients, cooking techniques, and culinary history that the chef and his team have accumulated for years into one open-source database. elBulli foundation will also include an eagerly awaited culinary center called elBulli1846 on the site of his former restaurant, which is set to open in mid-2018. The number 1846 represents the number of dishes Adrià estimates that he created there.

The cultural avant-garde movements of the beginning of the XIX century were characterised by their provocative attitude and based their socio-cultural strength in the publications of manifestos, in which the past was under attack and rejected for obsolete and what’s new and original was vindicated, challenging the existing values and models to promote paradigm changes. Few of these avant-garde movements also found deep inspiration in scientific and technological advances. As genuine avant-gardists, elbulli1846’s team has produced a sort of manifesto (which you can check on their website) revolving around an idea of a personalized interior experience. From its list of intentions, one that particularly stands up is the first one: “keep elBulli soul – magic, expectation innovation, creativity, anarchism and personal treatment”. It feels like something exciting and challenging is brewing. Are we ready for this revolution yet? 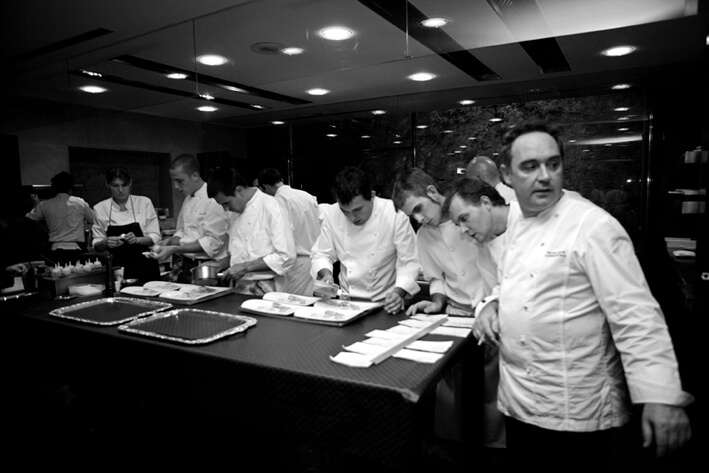 Could you tell us a little bit about the intellectual process that drew you into working in molecular gastronomy? What or who inspires you?

I’m actually not very fond of the term “molecular gastronomy” to describe or talk about my work. Molecular gastronomy is a blanket term for the scientific movement that aims to explain those phenomena that happen in kitchens, chemical reactions…, but has nothing to do either with innovation or the style of each individual chef. In any case, my inspiration comes from very diverse sources, starting with the story of gastronomy or the work of contemporary chefs, but also from art, life, nature, books…

New explorations into the crossover of art and science are said to have initiated an epistemological paradigm shift that could be understood as a second surrealism. Considering The Manifesto type of video published on the elBulli1846 webpage, it seems that it could bring about a new paradigm shift in gastronomy; what are the project’s aims?

elBulli1946 will be a creative hub focused on the research and deep understanding of the gastronomic catering industry and will act as a platform for projects related to entrepreneurship and education. The idea is to establish the similarities between the processes that define the framework within the gastronomic catering industry and the processes that allow understanding of other disciplines and projects.

You are expecting to give the audience a tailored experience. What reaction do you expect from the people participating in this experience? In which ways do you think are interactive and digital technologies changing or affecting human behaviour?

Interactive technology is influencing human behaviour; there is definitely no doubt about this; in the sense that it profoundly impacts our relationship with our fellow humans and the world in general. Taking it from there, and considering we don’t know yet the repercussions of that new paradigm we are getting into, we still don’t know how people will react.

In Statement 7 of the manifesto, DNA is mentioned. Will DNA and biotechnology be a prominent players in the elBulli1846 experience?

We use the word DNA in a figurative sense to symbolise decoding, classification, analysis… and to understand what gastronomy is. DNA is the code we need to find.

What would it be your biggest cooking extravaganza?

To make a hot ice cream.

Without any doubt, to keep a superior level of creative competence uninterrupted for a very long period of time.

My wife and the rest of my family.

(All photos and video courtesy of the elBulli archive)