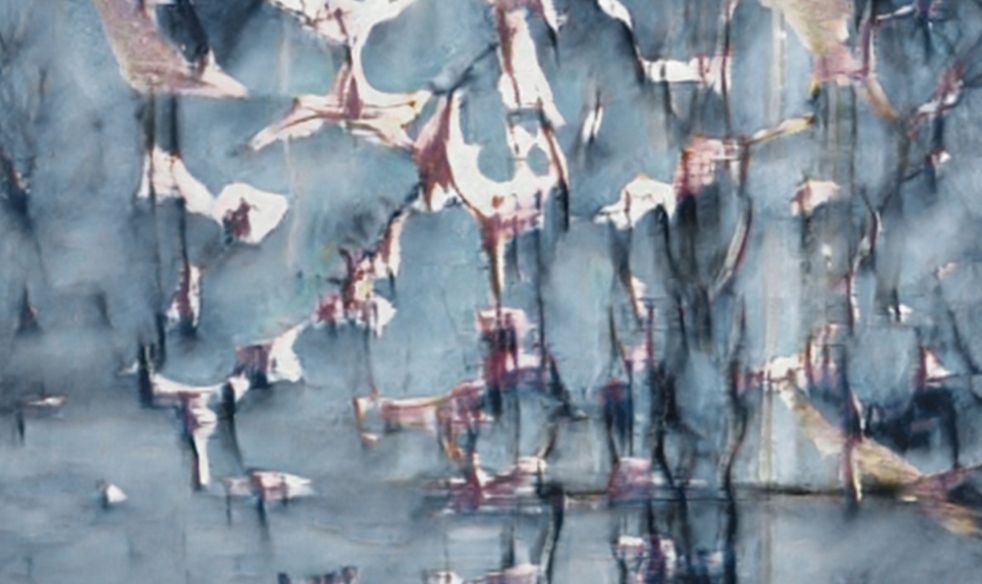 Adam Dove, producing and performing under the name Nexcyia, is an artist and musician currently based in London. His new record, Crawl, was recently released on Alien Jams and acts as a sort of abstract audio diary, exploring the personal tensions at play across a series of locations and experiences.

On Crawl, Dove’s palette mixes inorganic and organic sound in a way which refuses to delineate between the two, pushing towards a post-human perspective realised through sound. This results in a very specific materiality, the feeling that the sound is morphing between spaces, going from metal to water, to the atmosphere. Heavy use of stereo panning creates a sense of space within the production, allowing the listener to centre themselves in an imagined environment – somewhere between technological and biological but permanently in flux, vacillating constantly between the two. The production on Crawl is probably easier to discuss as one would discuss a painting, with tones and textures layered on top of each other with the aim of impressing an idea upon the viewer, of offering a suggestion in place of a declaration.

The duality of technological and biological components is key here, specifically the natural conclusion of either as a harmonious de-individualisation of the human. Dove contemplates the dissonance of the human experience, considering the possibility of a more laterally structured environment – atemporal and constantly moving. It seems that the references to negative emotions, memories or conflict come with the conclusion of a potential better way, one realised through a conscious de-individualisation of experience. Crawl is a sketch, a sonic template for this other way, realised as an exploration of the potential for sound in a posthuman perspective.

Your new record, CRAWL was recorded over a two year period between LA, Paris, London and Normandy. Were you intentionally trying to channel the impression of different locations through the record, or did it just happen to unfold naturally in this way? I’m particularly interested in the final location, recording in your family home and how this differs from the global cultural capitals.

I guess it happened naturally. My compositional strategies do change when I’m in a specific location but I don’t think my record reflects a particular city but more the mood I was in each city if that makes sense. When I was living in LA for 4 months I was depressed, anxious and looking for a job, I recorded Hidden(Yet) there and I feel like it really expresses that rage that was in me at the time.

When I was living back at my family house when the first lockdown hit us in March, I was there for 7-months and it really fucked my mental health because of certain family dynamics within the household.  One of the tracks that was recorded there was Human (un_fold) and I try to communicate how fragile we are like people – the resonant frequencies sonify that, but the noise and the low end in that track shows a certain power within us.

The final location differs so much from the other locations just because it’s the house I grew up in. So many of my fundamental memories were made it that place.

Considering sound as a tool within a broader art practice, this record feels very materially solid. The sounds crafted have specific, evocative qualities. In 24th Dec it feels like the high frequencies vacillate between synthetic and organic, at times impressing something like scraping metal that is shifting, warping into inorganic matter. What were your intentions with this production?

When I was producing the track at the time, I felt alienated and anxious around people – even my family. There was something compelling about this feeling. It’s hard to describe; it was like a feeling of being non-human, there were days maybe even weeks where I’d hide in my room because I either felt like a mutant or creature of some sort. So the intention in this production was to layer human and non-human sounds with organic and inorganic textures.

You described the record as concerned with post-human perspectives, which is interesting in that the aesthetic quality of your palette is exceptionally malleable. Can you describe your impression of sound as a tool for exploring posthumanism?

I feel like Post-humanism is an aesthetic that aims to challenge our outlooks and understanding of the self (as an individual) and I feel like sound in general has always been a system of expression that contemplates existence and being  and otherness. In fact, the universality of sound and the human desire to capture, mold, manipulate and create it puts sound artists and musicians at the forefront of the intersection of technology, philosophy and art.

In several places, CRAWL seems to shift between formal exploration of sound and the incorporation of genre, deconstructed club music specifically. What role do these genre signifiers play in your work?

As cringy as it sounds, I want Crawl to be heard as non-genre specific – I wish that was a category. I feel like I would also classify it as sound design and sound art-oriented work because of my background as a sound artist.

Something atypical about CRAWL is its brevity. The longest track is just under four and a half minutes, did you intentionally keep the record brief? I’m thinking specifically about the themes of anxiety, vulnerability and resilience. For me, moving between the tracks quickly created a sense of exploration, as opposed to the investment often necessitated by longer-form works.

There is definitely a sense of exploration – I guess it was intentional in the sense that when I produce it’s often a live recording – there’s a lot more arrangement in the shorter tracks but the longer ones like Exist By Hope Alone and Human unfold express what I was going through at the time – Vulnerability is just part of being and some people can feel vulnerable and anxious for a long time, these tracks sonify this longing for hope so most of the tracks are more ethereal sounding.

Melodically, the majority of your recent output is evocative of a dream state. It almost reminds me of an expanded, abstracted version of the way that dreams or hallucination were scored in children\s films in the 20th century. What’s your approach to melody? What do you aim for with its use?

I like to spend time on my own either reading a fiction or drawing! Sometimes, my ears need a rest from making music so I usually try to exercise my eyes and do visual stuff.

We have a PS2 in the house and I’ve been playing Jak 3 and James Bond: Nightfire, these old games bring back so many memories but I also watch a lot of crap on Youtube and Netflix

My dog, Fenix.
My best friend, Ben.
My twin, Alexa.