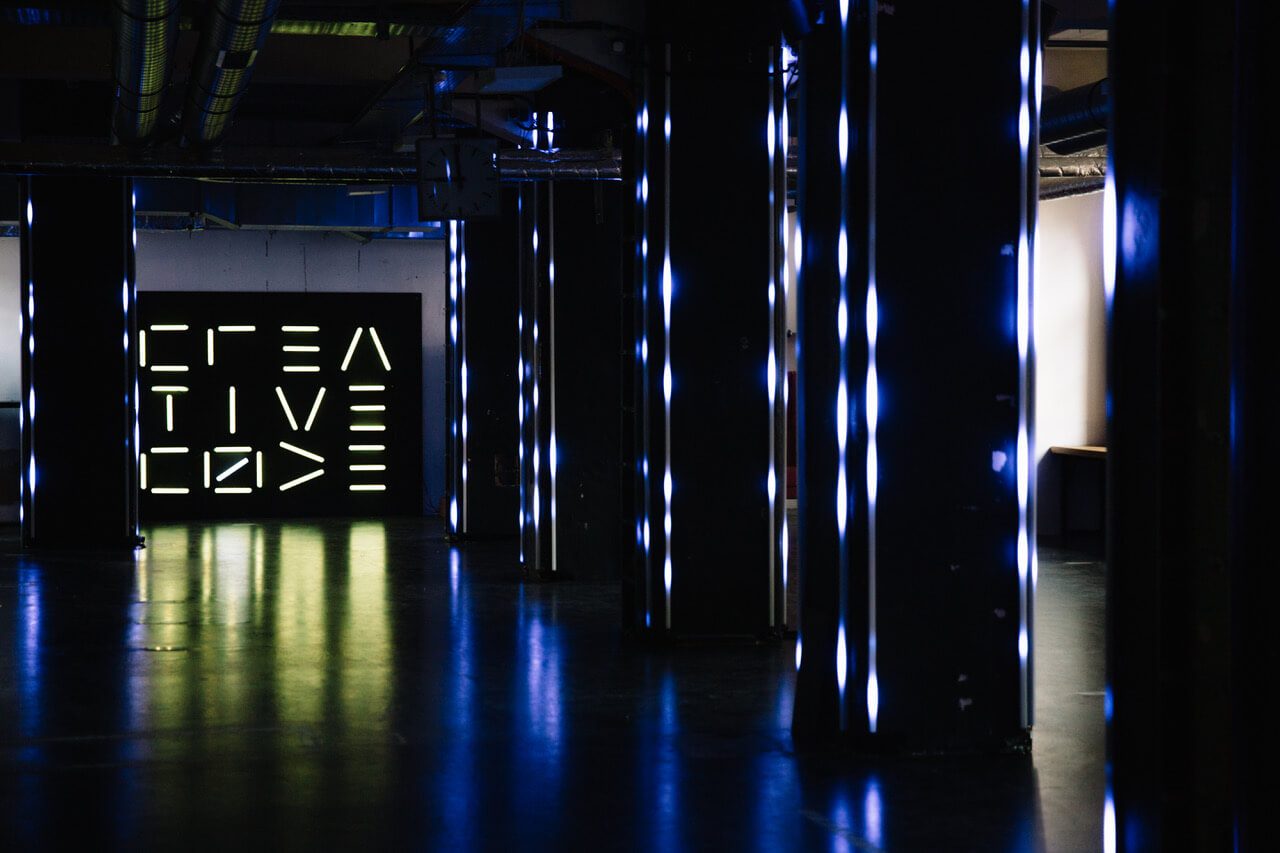 MARTIN EYERER, the mind behind The Creative Code at Factory Berlin

Martin Eyerer isn’t your typical tech executive. Having had a long career as a DJ from founding multiple companies in the music industry, Eyerer has recently taken on a new role as the chief innovation officer at Factory Berlin, the biggest international community for innovators and changemakers in Germany. Said to have been inspired by Warhol’s famed Factory in New York, Factory Berlin is a community space for tech-driven start-ups to coexist with other businesses and talents from all over the world. These sort of community spaces are not as new as big cities from all over the world have begun to invest in them to grow their own economy.

While these sort of ‘innovation communities’ have been populating most metropolitan cities, there is a distinct vibe that Factory Berlin gives off that most of these communities cannot replicate. Part of this appeal is what Martin Eyerer is trying to grow and include into the culture of Factory Berlin. Because of Berlin’s historical importance as a haven for artists and creatives who seek life off the beaten path, Eyerer has been mixing music culture and tech culture as a way of leveraging Berlin’s history and environment. There is an understanding in Berlin that much of Berlin’s strength and character has been from the artists and musicians who have come from all over the world to call Berlin their home. In typical Berlin fashion Factory Berlin also aims to develop what some may call ‘startup accelerator’ in typical Berlin fashion.

‘The city has been the cultural centre of Europe before the First World War (…) It is proven that cities with a flourishing creative and subculture scene also attract the tech and startup scene.’ Eyerer says about what makes Berlin’s tech scene unique and innovative from other cities.

One such initiative that Eyerer has been able to deploy is called The Creative Code. Described as an initiative that aims to unlock the creative potential of the space where technology meets art, Eyerer’s vision for Factory Berlin includes spaces where people can make music, art and inject more creativity through artists in residency programs. Eyerer’s first creative code event was held this May in collaboration with Sonar+D and Eyerer’s own Riverside Studios, where panel discussions on the Future of Work and AI in Art & Tech were held with a mix of music performances and art installations in the space for audiences to explore and participate in.

Suppose there is one thing about Factory Berlin that is clear, their emphasis on building a community and network for creative thinking to exist. Projects like The Creative Code exemplify a willingness to try something different and to contextualise a working space as a space where people meet, get inspired and work together. By allowing creativity to emerge from Factory Berlin’s walls, there is no doubt that this will be a space to watch for new ideas and solutions to some of our societies deepest problems.

Could you tell us a bit about your background, interests, and inspirations for our audience that is not familiar with your work and background?

I started to DJ at the age of 16 in 1986, which I still do today. In 1990 I founded my first company  – a service business that unfortunately failed. After graduating in 1991, I went to law school in Tübingen, south of Germany, where I grew up. While becoming a record producer and my DJ career picking up, I founded a record promotion and marketing company with two friends. The company did well, and besides having success with records, we were producing those days, we started to run a label.

In the following years, I produced more than 200 records and played around the globe at festivals and electronic clubs. When I moved from Stuttgart to Berlin in 2012, I founded the Riverside Studios Berlin with two of my best friends. It took us 3 years to form the company it is today: A community of musicians, artists and songwriters in all musical fields. The Kreuzberg located facility with its 27 studio suites is known worldwide. The mix of travelling, being creative, and being a businessman simultaneously made me become an excellent networker with a huge network of interesting people around the globe.

What made you move from being one of the top musicians and producers to your current position as Chief Innovation Officer in Factory Berlin?

That’s how I started to develop a tech & art program called  “creative innovation” today, and finally is one of the teams I am running. The idea behind this was me coming for three months to work a few days per week at the Factory Berlin and setting up the Creative Innovation Program, the team, and the department. After that, I started to deep dive into a new and exciting world, and soon it was clear to me that I don’t want to leave anymore.

When Nico Gramenz, also a friend of mine, joined Factory Berlin as CEO in January 2019, he, Udo and I sat together, thinking about how we could set up all of this. This is how Riverside Studios and Factory Berlin officially announced a Joint Venture. Today my responsibilities are being in charge of the creative innovation team and the team taking care of the individual members (called the community team). I am also building up a new tech team working on a digital platform.

Factory Berlin is an international community of innovation and change-makers based in Berlin; what makes Berlin’s tech scene unique and innovative from other cities? And how do you see its connection to the arts and music?

Berlin, with its special history, is pretty unique. The city has been the cultural centre of Europe before the First World War. The old emperor Friedrich did a lot for that, and until today art, sub-art and music are one of the main factors driving the german capital. However, 30% of all tourists coming to Berlin are only interested in the club scene. With more than 120 clubs open day and night from Monday to Monday, there is nothing comparable. A key phase was during the separation time of Germany, where Berlin as well was divided into east and west.
The west part was, in fact, an island within the grey DDR around it. Berlin attracted “social dropouts” from all over Germany escaping military service or simply looking for freedom. A lot of available and abandoned space and empty old houses were the base until today’s legendary subcultural scene of Berlin. Berlin is more than ever attracting creatives and talents around the world to become inspired and being creative.

It is proven that cities with a flourishing creative and subculture scene also attract the tech and startup scene. The experience with our community underlines this fact: most of our 3000 plus members are very music and art-driven. Some of them are even musicians or artists on the side of their tech profession. Moreover, they love to live in Berlin, where all of this comes together.

In the last few years, we have seen how science institutions (The Francis Crick Institute in London or Max Delbrück Center for Molecular Medicine in Berlin) engage their scientific research with artists. How do you think the tech/science and art scene can inspire and profit from each other?

To bring people together who, on the one hand, research and develop things further in a planned and “doable” way – with a particular approach to reaching a certain goal – and on the other hand live to create the unexpected, trying every day to create something new without limits. That leads to innovation. Getting inspired, challenged and change the perspective is what innovators and creators want.
We at Factory Berlin believe in a diverse and creative environment to exchange. Already back in the days of Leonardo Da Vinci, technology and invention were not separated from the arts. But, industrialisation got split, and people became specialised in engineering and other technical professions. That’s what the industry needed.
These days pure technical development is more and more driven by machines and computers, so creativity becomes important again. The generation of digital natives – the talents – generally lives more creatively than any previous generation.
What we do with the Creative Code, our tech and art program, at Factory Berlin is not just how we believe the world is changing; we can help the industry learn about this culture change and benefit from it.

Factory Berlin is bringing together music and tech within its project: The Creative Code; could you tell us more about this initiative?

The Creative Code is a new strategy to connect technology experts, creatives and visionaries to interdisciplinary co-create. Moving away from silo thinking towards an open mindset, we defined ten statements representing it:

It starts with a mindset and an awareness and results in many activities and initiatives we meanwhile provide. An artist in residence program makes sure we have an even larger community of creatives in addition to the Riverside Studios residents. In our recently opened Creators Lab, we provide the space for everyone at Factory to create music, arts or even cooking or doing certain sports. We actively bring our members together in sprints and design thinking sessions. Full programming of a high class curated program with international artists in any field makes Factory Berlin the place for technology and the arts. We partnered up with leading players in this field, like the Sonar +D conference from Barcelona or the Ars Electronica Festival from Austria. Finally, Factory Berlin works on its very own tech & art conference and festival starting in 2020.

What’s next for Factory Berlin?

Factory Berlin became an expert in community building, and the Factory Berlin community is definitely unique. 58% of all startups founded in Berlin in 2018 emerged out of our ecosystem.
The next steps are to expand this successful model to other cities, which we are currently working on. Then, on the digital, finally, we are working on a platform to provide the benefits of our community and people worldwide.
By moving from co-working to curating and building a community already years ago, Factory Berlin has been a first mover. The Creative Code is a way to teach about a culture change that society currently goes through. Again Factory BerSo is viewed as the first movers, and we see already others to follow.

What is your enemy of creativity?

The attempt to plan everything up to every detail. Leaving no space or any chance for the unexpected. Being stuck in routines. And: The own comfort zone.