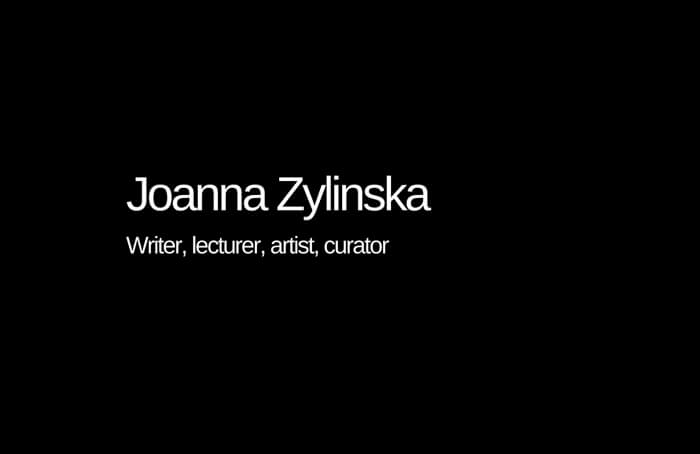 The Earth has entered a new geo-historical period, significantly human-influenced, called Anthropocene. Humans, acting as agents, have left (and continue leaving) their fingerprints: biospheric, geologic or climatological earth processes have been altered by them.

The biodiversity and ecosystems with a wave of extinctions have been driven by the activity of humans. On the other hand, the implications of the Anthropocene in humanities, like art and philosophy, are related to questions about death, species extinction and the end of civilizations.

Writer, lecturer, artist and curator Dr. Joanna Zylinska combines philosophy, photography and curatorial work to build a bridge between the sciences and the humanities. In her most recent book Minimal Ethics for the Anthropocene, Dr. Zylinska opens a window onto the this new era to help us reflect about life as a biological and social experience.

What drew you into working at the intersection of bioethics, new technologies and new media? Could you tell us a little bit about your intellectual process?

My interest in bioethics arose out of the fact that I wasn’t satisfied with the dominant ethical models for thinking about questions concerning new media and technology. It seemed to me that the traditional paradigms which decided what was deemed good and appropriate, and what humans should and shouldn’t be doing, were based on the very traditional, even conservative, idea of the human that itself needed rethinking, both biologically and philosophically.

I was also less interested in a bioethics that tells you what you should or shouldn’t do, and more in a kind of bioethics that offered a philosophical opening towards asking different questions about values and decisions being made about life, at a time when life itself was being remade.

How does your interest in bioethics tie in with your work on the new Anthropocene era?

For me an interest in the Anthropocene was a logical consequence of my earlier work on bioethics. In my most recent book, Minimal Ethics for the Anthropocene (Open Humanities Press, 2014), I was trying to ask questions about human involvement in the constitution and transformation of the biosphere and the geosphere. I was also trying to encourage reflection on the responsibility we humans have for life on Earth – while there is still time.

Of course, I’m aware that humans are not the only agents that are making changes to the Earth planet. There are plenty of other influences, such as meteorites or even air, but humans have become much more active in shaping, directly and indirectly, the geo-forming processes. I’m keen to investigate the interpellation this situation puts upon us – and also in thinking how it pushes us, as philosophers, artists and curators, to develop new languages and new imaginaries. My approach is therefore very much aligned with artistic and, more broadly, creative interventions into the debate on the Anthropocene.

It’s worth stressing that my book on ethics and the Anthropocene wasn’t about telling people how to live. I really don’t have any prophetic or moralistic aspirations: moralism frightens me a lot, actually. I’m rather interested in developing a response to the values that are being proposed with regard to this current narrative about the Anthropocene era. I try to stay away from the ethics that tells you how to live, and focus instead on asking ethical questions.

In other words, I want to probe other people’s ethical discourses and pronouncements, and consider ways of opening them up. So, when I’m writing about ethics, I’m simultaneously trying to invent a different, more open and more playful, language, in which we can ask questions about how to live a good life. The book is very much intended as a response aimed at those who supposedly already know how we should and shouldn’t live.

This is not to say I advocate we should give up on our responsibilities or accept that ‘anything goes’, but I also want to go back to asking the original question about who decides about life and its value. Is my life’s condition of possibility not at the same time somebody (or something) else’s condition of horror? Which groups and species need to die so that others can survive and thrive? So it’s really about going back to the traditional forms of ethics to see how are they shaped; what’s behind them; what’s been occluded in them. I think artists are very well predisposed to help philosophers re-pose and re-stage some of these ethical dilemmas in a new way.

At the moment I’m writing a book on nonhuman photography. I’ve worked with, and written on, a lot of bioartists as well as new media artists. But I’m now turning my attention to what you might say is a simpler medium. Yet for me photography is one of the most exciting media today. We should also note that photography has been a living medium from its very inception.

You could argue photography is therefore an original form of bioart, through its entanglement with the natural world of plants and chemicals. It is also, even in its digital guide, also fully material, as digitality requires cameras, computer servers, electricity cables, screens etc., etc. When thinking about nonhuman photography, I’m looking at the act of perception that is not only human these days: we are being perceived, and images are being created, by various machines, Google Street View, Google Earth, satellites, cameras on the Hubble telescope, CCTV.

So I’m interested in exploring this expansion of the gaze that goes beyond the human but also in looking at some of the more obvious things like Instagram, or the fact that everyone carries a phone today – and that there is an algorithmic aspect to all photographs. Just think how most people’s pics on Instagram look very similar, in terms of their format and size, the filters applied, etc. Even people’s wedding photographs, those special reflections of supposedly unique moments, have a shared visuality. We could say, after philosopher Vilém Flusser, that there’s a technical mode of operation, or a nonhuman algorithmic logic, in those supposedly very human cultural practices. As part of this project, I’m also currently studying what I’m calling a geology of photography, trying to understand fossils and other forms of impression-making as early photographs.

What is for you the main enemy of creativity?

Yet an attempt to turn creativity into a product, like coal or cars, and to monetize it, threatens its unruliness. Something important gets lost in that transaction.

Dr. Joanna Zylinska is Professor of New Media and Communications at Goldsmiths, University of London. Find out more about her work and books on www.joannazylinska.net