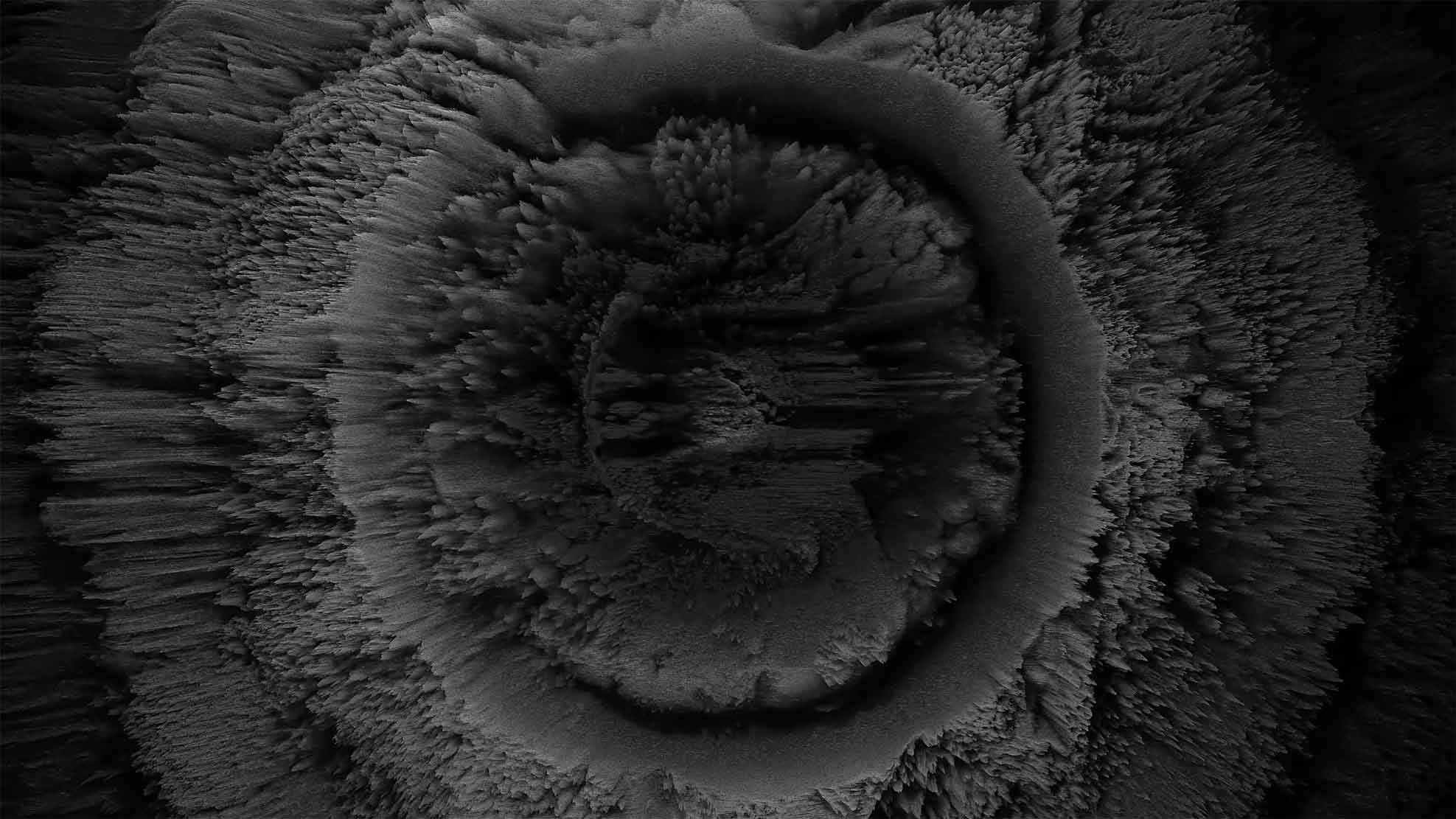 There is a brief moment in time, that liminal space between wakefulness and sleep when the fabric of reality begins to warp, and the logic of space and time slowly melts away, plunging you into an ever-shifting dreamscape of surreal audiovisual fantasia. 404.zero, an artist duo of digital diviners and A/V architects, roams this porous frontier between the real and the imaginary, where the realm of waking senses and the hazy sphere of the unconscious coalesce to forge a gaping portal into an otherworldly alternate dimension.

The philosophical connections between the rational and the irrational, the tangible and the conceptual underpin many of 404.zero’s audiovisual performance projects, emphasizing the fact that all things exist within the cosmic space and one is unable to comprehend its infinity. Peering at the vast expanses of the inconceivable, 404.zero’s audiovisual fiction speaks to spatial and temporal disjunctions, a sort of intangible limbo where the whole notion of reality implodes, reaching a state of pure abstraction.

Simply put, 404.zero is an enigma wrapped up in mystery; yet, there’s beauty in the willful elusiveness of their work. It is through the embrace of the unknown that we can forge new pathways to creativity and boundless exploration, and through our acceptance of death that we can [eliminate] any fear of criticism and [devalue] any goals altogether. A person, who can devalue everything, is absolutely free. In such a state of mind your talent peaks.

Continuously pushing the synergistic possibilities of visual and sonic terrains, the collective revels in the raw power of absolute freedom, simultaneously withdrawing from non-stop consumption of modern society. In their own words, 404.zero is a renouncement. It is “nothingness”, and within that infinite void lies a precise and clearly definite understanding of life’s concept.

404.zero claims nothing with its work, dehumanizing it and leaving it without identification. From the moment of its creation, it continues to live and breathe on its own – entirely self-sufficient – allowing the viewers to develop their own relationship with the artwork and the space within which it exists.

Hailing from St. Petersburg, Russia, the collective was born out of an effort to eviscerate conventional dogmas and values, creating audiovisual projects that push the meaning of clarity to the limits in the field of modern generative art. 404.zero’s sonic elegies and visual dreamscapes carry an aura of near-unbearable intensity, wherein one’s Self dissolves in the complete totality of nothingness. Their recently released debut album 404.0 is a mesmerizing trip into the eerie, a schizophrenic hallucination of sounds that invites us to explore an array of sonic textures, flowing and merging with one another in cathartic unison.

You call yourselves A/V architects, a collective who crafts thrilling, precise, painterly code-art that broaches big philosophical questions and provides mesmerizing though highly speculative answers. Your work juxtaposes live coding, math, audiovisual architecture, generative visuals and electronic composition. For our readers who are less familiar with your work, could you tell us more about your creative philosophy and the idea behind such a cross-disciplinary approach?

All we do is Machines. We call it ‘Machines’ even if it is algorithms producing video or audio content. We build them without any purpose. Then, we run them and observe their behaviour, what questions they raise and how we can operate them and interact with them. It’s a mathematical experiment and a dialogue with the Machine.

As you’ve discussed in previous interviews, your creative philosophy is deeply grounded in the notions of death, the unknown and the cosmos. What is it that draws you to these metaphysical concepts and how do they manifest in your own work? What do you want the audience to take away from such creative explorations?

We just happen to be silent freaks. For us, mathematics, death and space are the most silent places in the universe. We would like humanity to be a bit more sensitive, responsive and silent. And this is only possible through silence and concentration.

But to be perfectly honest, we don’t expect anything from people. We do our best to make the world around us comfortable for our existence. And with more silent and thoughtful freaks around us our life would become much simpler. If the viewer can value beauty and silence – this is just perfect.

Speaking of your moniker – 404.zero – you once described it as a ‘renouncement’, as ‘nothingness’. Could you tell us more about the symbolism behind your chosen name and how it plays into your overall creative philosophy and creative values?

Nothing means nothing. There’s no hidden meaning, underlying idea, or any kind of truth. 404 is nothing. Everyone will die and 404 as well. Everything that someone loves, appreciates, saves, hides is nothing in its essence. 404 means nothing and that’s all the influence it has on us. A moniker cannot define anything. Names are just a formality that people so zealously assign to each other. What does the name Maria mean? Nothing. It’s important what Maria is like. If someone steals our moniker from us, those people still won’t ever become 404, because it’s not the intelligence, not the ability, diligence or pain, it’s just a name.

You once said that 404.zero claims nothing with its works, aiming to ‘dehumanize’ it and leave it ‘without identification’, allowing the viewers to create their own perception of the artwork and the space within which it exists. Could you elaborate on this idea of wanting the artwork to be self-sufficient and have a life of its own? Why is that so central in your creative practice?

Algorithms are like living creatures. Writing algorithms, designing the logic, programming, including random systems – all this means giving life to a system and giving it freedom. There’s no personal goal in it. The sole goal is the very process of creating living systems. If you don’t get it, it would be safe to compare us to the Blade Runner character, who built robot friends.

In conventional terms, human understanding of reality is largely anchored in linear beliefs and patterns of existence. However, in most of your projects, which bring together real-time sound and light compositions generated through random algorithms, the logic of time and space melts away, taking the audience into a somewhat alternate universe. JetLag and Arrival are just a few of your projects that seem to step outside linear temporality and conventional framings of space. How does 404.zero conceptualize the duality of time and space, and in what ways does it manifest in your body of work?

We don’t conceptualize anything. We build machines and start a dialogue with them within the process. If the machines raise certain questions, that’s great. If not, also great. If the machine does not work at all – that’s bad, but sometimes there’s beauty in it as well.

It’s hard to describe the concepts of our works because there’s not any. The Jet Lag piece was called this way because it was created in a state without time when the body clock is disrupted and you don’t understand when the day turns into the night. We often travel from continent to continent, often suffer from insomnia, and we almost invariably experience jet lag. And we actually like it – this condition helps us disconnect from everything rational and do what we want.

No time. No Future. I am here. RIP. is an immersive performance-installation based on Plato’s ‘Allegory of the Cave’, which used a 361 custom-built parallel laser array and sound synthesizers, controlled with a kinetic sensor and custom software. What were the intellectual process behind the project and the themes you wanted to explore?

When we started working on this project, we only had one question – if we place a lot of lasers on a vertical wall in a grid pattern and configure them in parallel, what will the result be and what can we do with it? The concept of Plato’s Cave was attributed to the work later on. To be honest, there’s no special meaning for us in this text. We were curious to see if it would give more public resonance to this piece or not.

You have a pretty distinctive sonic language, which rejects samples, loops or any other studio tricks. In your recent audiovisual mini-album Black Sunday, we witness a monochrome video track, synched with structural metamorphoses of sound. It slowly builds a transcendent sonic environment, whereby the listener/viewer gets sucked inside the music flow as if it were a blackhole of sorts. Could you tell us a bit more about your sonic philosophy and the influences that guide your work in the field of electronic music?

We began writing music because we needed the sound for our installations and it had to be very different from pop or classics – it had to be absolutely unrecognizable and unique. This sort of sound can be created on modular synthesizers, which are capable of generating huge drones based on mathematical algorithms that make our blood run cold. We really like the fact that these sounds – drones – only last for once. Just one step away a different combination completely changes the whole sound.

We work and live with sound, we frequently listen to our recordings, and there are plenty of them. We enjoy living in sound algorithms, discovering mathematics in music, and when the old tape delay generates artifacts without a sound source, this is just great. We love when modular synthesizers start singing in human voices and everyone is surprised that there are actually no vocals in a track. We love when synthesizers produce sounds that resemble whale squeaks or wind noise. Hearing that makes us happy. It’s so much more than anything human.

You work exclusively with TouchDesigner to create visuals, and with modular gear to generate sound. Why did you settle for these tools and how do they allow you to realize your creative ideology?

TouchDesigner is a balance of opportunities, convenience and customization. It’s brilliant software that solves a fairly large number of questions that arise during the programming of our works.

Modular synthesisers imply experimenting, unpredictability and massive opportunities for the creation of something absolutely brand new because the variations are almost infinite.

Sitting still. If the view from the window doesn’t change for more than a month, it leads to depression and melancholy (which is actually a great movie).