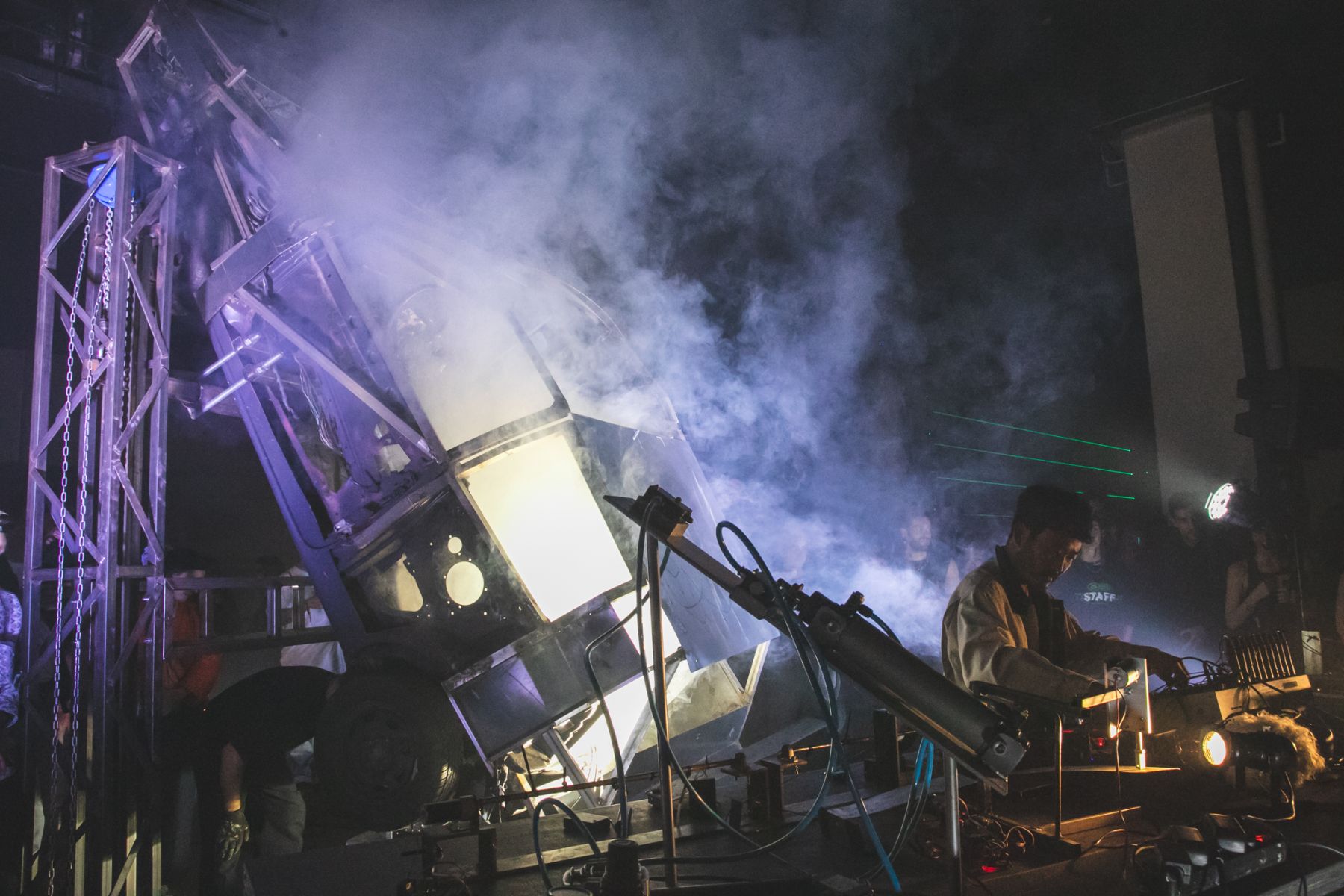 For its 2022 edition, Barcelona’s MIRA Festival moved from the post-industrial setting of the Fabra i Coats to the rather more nondescript Fira Montjuic. While the new location may have a little less je ne sais quoi, the organizers certainly did their best to fill up the space. The large Dome, in which 360-degree video works were projected, made a big impression in the outside area, and large-scale installations and plasma screens were dotted indoors.

MIRA dubs itself a ‘digital arts festival’, and its dedication to showcasing different mediums alongside each other is certainly more observable than similar events with an art component. This year continued its dedication to showcasing a range of video, A/V and light installations which are very post-Blade Runner but also nod to fantasy game design artists such as Yusuke Naora. As if trying to make you a protagonist in an isekai story, the work tends to try and take you somewhere a little uncanny and unformidable. Lolo & Sosaku’s Torqué, a battered car perched at a steep angle upon scaffolding, smoke coming out of its emptied window frames as if it has recently been crashed and left to burn, was one of the more striking sculptures.

Of the light installations, Tiler Gab’s O ended up being one of the more popular places at the festival for people to make Instagram stories. A beam of projected light passed through an elongated ‘O’ that hung from the ceiling. It’s a nice meditative piece, but its mood probably didn’t benefit from being surrounded by half-drunk people most of the time. Elsewhere, Maxime Houot’s large-scale Ataraxie (meaning “piece of mind”) presented red lasers being shot out of numerous rotating arms. The arms first moved minimally and glided before picking up steam and creating complex webs of light, and descending into a Fibonacci spiral. Meanwhile, the soundscape mixed wooshing, tidal effects with an intense techno melody. The piece generates an impression of mutating forms and structures.

Structures were also being deconstructed in the Dome. Shoeg’s Exo explores the universe after humanity has disappeared and all our shit is floating around, the debris and moulding waste supporting new alien forms of life. The sense of epic space the piece produced was really impressive, even if the reliance on glitchy aesthetics felt a little out of place. 3D studio Onionlab, on the other hand, went all in for a glossy resolution image. Its Paradoxa moves through cascading metallic beams before transitioning into a world of morphing and gothic churches and clock mechanisms. The imposing electro soundtrack is composed by Unai Lazcano, the one-time keyboardist of the Spanish band Delorean.

On the music front, the two days generally kicked off with artists who use synths as part of an ensemble. Moin provided a gloriously grizzly and grungey noise on Friday. Reminding me of Sonic Youth and Mogwai, their lack of crowd interaction was certainly fitting for a group so indebted to the post-rock scene. Saturday opened up with the Spanish group Somos La Herencia. Despite taking a while in between songs (we guessed there might have been some tech issues), the four-piece built up an engrossing, antagonistic energy that kept heads bobbing at speed.

Another rockier addition to the lineup was Michael Rother, who played as part of his tour celebrating 50 years of influential German ‘krautrock’ (or ‘kosmische Musik’, as Germans might prefer to call it) band Neu! The group was well rehearsed, and there was certainly a jagged energy to the performance. More than one old-timer in the audience enjoying the nostalgia (in general, MIRA attracted the older audience that niche autumn/winter festivals tend to, compared to their summer counterparts). I could hear, in retrospect, the future ghosts of Joy Division/New Order resonating from the speakers.

Kali Malone featuring Lucy Railton and Sunn O)))’s Stephen O’Malley should have been a highlight, but the soft, hypnotic tones felt a little lost in the cavernous space. Though plenty of people got there early and sat crosslegged close to the stage for the duration, they looked like they were a little more in the zone. Voices From The Lake managed to fill the same room up a little more successfully the day after during one of Saturday’s earlier performances. Their psychedelic techno entered a groove that was hard to resist.

The event’s headliners were two legends of the UK electronic music scene: Orbital and Squarepusher. The former brought a lot of fun to proceedings, being two of the most animated people to be on stage the weekend. While some of the samples were incredibly cheesy (looking at you, Brian Cox monologue), and the visuals were the authentically late 90s/early 00s (which I guess makes them in fashion these days), the duo’s acid house and techno never stopped inspiring a wave of crowd movement. Earlier in Squarepusher’s set, the bass guitar noodlings didn’t quite set the crowd alight, but he soon transitioned into the frenetic drum’n’bass that he’s famous for.

Continuing the British theme, Loraine James (who has previously said she was inspired by Squarepusher as a teen) composed a beautiful set of footwork-inflected electronica, which sometimes edged into more minimal territories. The musical smorgasbord was completed by DJs Nia Archives and Special Request, who brought energetic jungle and breakbeats to the decks in a city that rarely hosts anything varying from 4/4.

Considering its relative brevity, MIRA festival offers a lot to enjoy. Its relatively small scale is pleasant and means you bump into people two nights running, which gives the festival a friendliness that is missing at bigger events. By migrating to the Fira, the MIRA organisers show that they clearly have expansion on their minds. I wait to see if it can retain the energy and quality it has while it likely continues to grow for future instalments.