KRISTINA PULEJKOVA, earthly ecologies through the lenses of digital technologies

Kristina Pulejkova, born in Macedonia, is a London-based multimedia artist, whose practice mostly concerns environmental issues, which she investigates through use of technology. Her interactive works, revealing non-anthropocentric narratives based on scientific data, break down boundaries between man and machine, the organic and the synthetic, the physical and the immaterial.

Thanks to technology, Kristina gives one an opportunity to question the ontology of things, materiality and what art means. In her video The Lizard Gaze (2018), for example, the artist speculates how it would be to view an ancient sculpture not only as a 3D printed model but also in a lizard’s skin. Technology-influenced art pieces all share the characteristic of immersivity and just like the lizard enters a hollow synthetic head of a statue, the body of the viewer is an intrinsic part of activating technology, which becomes their extended body.

While using Virtual Reality equipment for viewing her 360° videos, Kristina puts the spectator in the middle of her works, at the same time keeping their body out of sight from the viewed image. With a headset covering the face, technological equipment creates a threshold between the viewer and the world, opening one’s eyes to a brand-new experience. Kristina’s practice, thus, evokes the fact that the world consists of multiple realities, not only the ones that belong to the human power of seeing.

In her collaboration Owen-Pulejkova, Kristina has been also using the medium of sound to explore the effects of climate change affecting environments globally. Their ongoing project titled ‘Switching Heads’ uses binaural sound technology and film to collect sonic stories from areas around the world at the highest risk of rising atmospheric temperatures. Consisting of a life-sized mould of a head, made out of materials naturally existing in a certain place that after their decay again become part of their native environment, accompanied by a pair of binaural microphones recording the sonic landscape in 360°, the work transports the viewer to locations as distant as the Arctic, for one to affectively understand through senses of hearing, touch and vision the environmental state of things in a given location.

The project Where We All Meet, that Kristina is currently working on, is devoted to migration of eels and its analogy to anthropocentric striving for lifelong self-fulfilment. Even though never directly observed by humans and without any scientific evidence, it is known that all European eels, no matter where they live, once mature, spawn in Sargasso Sea. Driven by their instinct, after unbelievably demanding journeys, they all meet in one place, to continue the life-cycle of their species. Struck by the fact that man-made dams, for example, are constricting these poetic journeys, Kristina through her work silently suggest another thought on the fact that to develop means also to kill or like in this instance to break the naturally evolved environmental pattern, preventing the eel from travelling and meeting their partner to procreate.

For the event ‘Sensing the Sea’ organised by super/collider in February 2019, Kristina did a live audio-visual performance, where two human figures in conversation took on the role of possible eel lovers. Anthropomorphising the fish, through a digitally manipulated sound and image, the artist offered a different perspective that evaded the understanding of the world reasoned by a self-centered subject in human skin. Looking at the animal world through the lenses of technology, giving importance to matter, bringing to our attention the complex.

Words and interview by Agata Kik

Your work is mostly concerned with ecological issues. What is the relationship between the organic and the digital in your practice? What does the use of technology enable you to achieve and what is its potential in raising the awareness about climate change?

I use organic materials and life forms as digital layers in my work, often positioning nature as a scene in which the narrative unfolds. When using digital approaches like 3D scanning or compositing, I have natural processes in mind – I try to think about technology by applying organic models like entropy or evolution. Placing audiences in a space that can’t be reached due to scale and time restrictions, like inside a whale’s brain or one thousand years in the future, can have a massive impact on a person’s consciousness. Immersive technology affords such experiences and therefore lends itself very well towards giving people a different view on complex issues, something that I find very important when it comes to communicating about climate change.

Working with Virtual Reality in your artistic practice, you mostly engage the physicality of the viewer, what results in an interactive experience of your works. What do you want to achieve through active involvement of the viewing subject in the experience of your artworks? What are the challenges that this brings?

With VR and AR, I want to give agency to the person experiencing the work. I believe that ‘being inside’ a work through interaction, enables us to experience real presence – the now. There’s something very liberating in being able to dive into an experience through VR, or having a very uncanny feeling when using AR – both mess with your senses and perception of space.

The challenges of making such work have been around predicting the interaction that people will have with it – not everyone will be doing the thing you like them to be doing. Sometimes, people will try to trick the work, find its flaws or intentionally look in a different direction to the one intended. With works like this, I have learned that I can’t have complete control over how people engage with it, but building solid interaction parameters and having a good story are key. It’s actually very enjoyable to watch people’s reactions when engaging with the work!

Technology enables the collapse of temporal and geographical boundaries. What is the quality of presence in viewing contemporary media art? What are the potential technological developments to art viewing, participation and ways of being present in the art world?

I think it depends on what kind of artwork it is, how it’s meant to be seen. I do believe that there is a certain quality on experiencing works in physical space, but web/app based works enable audiences to engage with art from the security of their own space. There is still physicality in experiencing this type of work, with the added element of democratisation of access – everyone with internet access can see it.

Some works, however, need to be experienced live, in physical space, in a collective environment. Lygia Pape’s Divisor [1] performance comes to mind – you just have to be there, to be in it. If a work has taste qualities, it just has to be experienced in situ. Although, I’m optimistic about this becoming a digital exercise in the near future [2].

Technology affects the human experience of art and the conception of what art is and can be. Reflecting on your past experience, could you describe how the technological element influences the idea of and response to an art object?

Historically, technological progress has always influenced art. If it was the camera obscura in the 17th century, it’s the internet, immersive tech and machine learning in the 21st, to name a few. I tend to use technology as a catalyst towards offering new ways of seeing things, beyond human perception. We live in an exciting time when computing power is enabling new models of art making, within very short timeframes. I do believe that in any art work, the concept needs to dictate the medium, technology tends to be a tool in bringing complex ideas to life.

In your works, you also create a different way of looking at things that evades the anthropocentric perception of the world. What are the effects of contemporary digital technology on human interaction with matter in general?

With offering other points of view, my aim is to open up the way we think about other life forms, as well as the world around us. In that respect, I find that technology like AR or VR offers another layer in experiencing the world, further allowing for a shift from the anthropocentric worldview.  In this way, technology embodied through a VR headset or screen acts as an ‘in-between’ zone between us and the environment that can afford the notion of understanding or at least coming closer to the other.

The project you are working on at the moment is a two-part installation, consisting of water screen projections and a 360° video of a dance piece choreographed by Georgia Tegou. What was the process of working with the dancers and the choreographer in the context of digital technology? What did you learn from this collaboration?

I’m currently working on Where We All Meet, which is a research project inspired by the European eel’s mysterious life cycle and migration. Through taking part in the inaugural FLAMIN Fellowship programme, I was able to work with Georgia Tegou and shoot the 360 video sequence. It was the first time I was working with dancers and directing the piece in 360 degrees was a specific challenge. Working with Georgia was an amazing experience, she managed to capture my concept through body movement. We had lots of discussions on what an eel might move like in deep waters and how a body behaves underwater, what would the physics of movement be in that environment? The collaboration has really left me thinking about doing more with dance and VR/360 video, I think this combination is a really good way to show other types of consciousness embodied through dance.

My grandad’s home-made grappa and falling deep into tech gadget reviews on YouTube.

ANIA CATHERINE & DEJHA TI, the most creative and critical love of art and technology 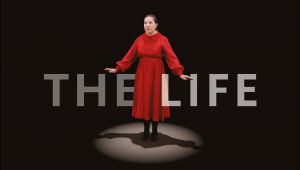 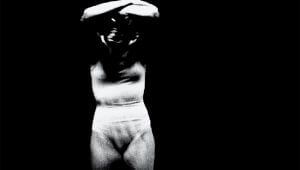 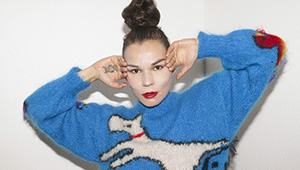