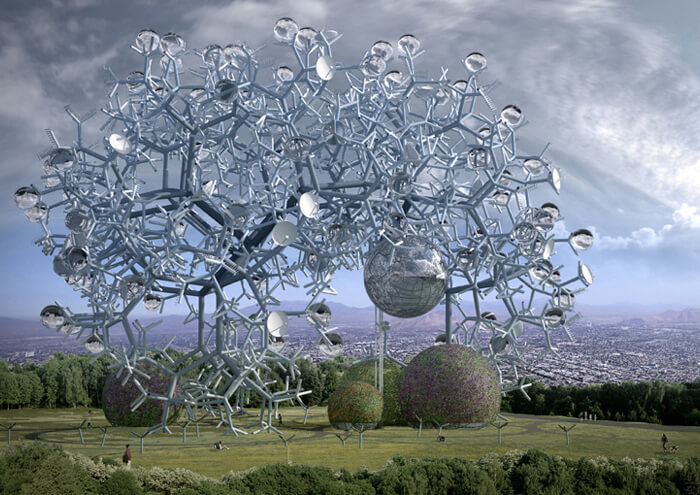 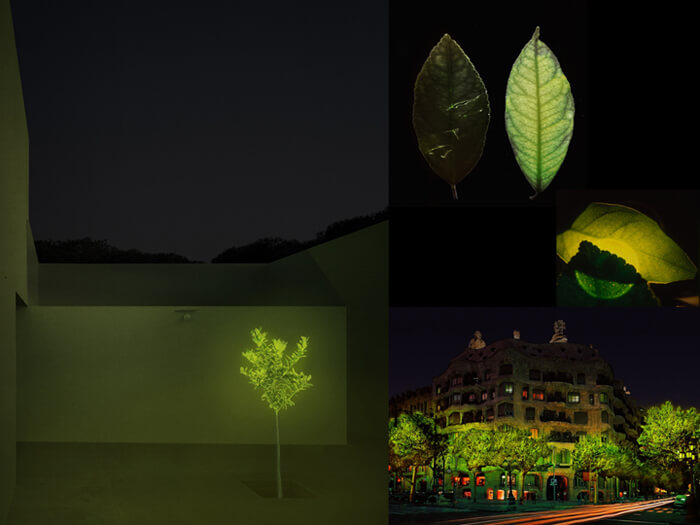 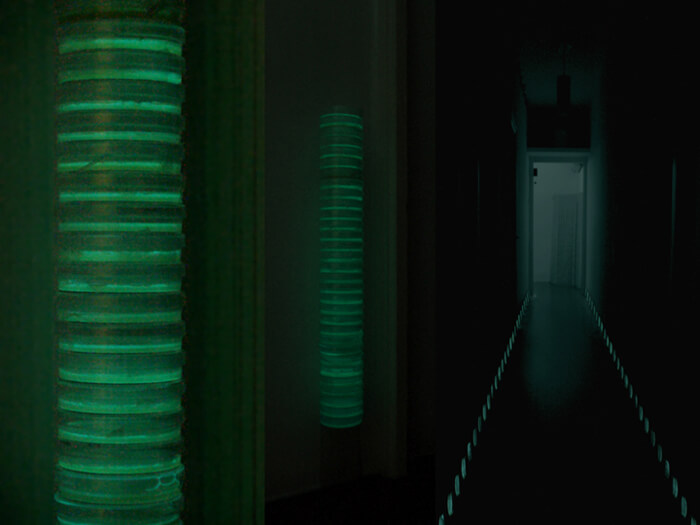 The public understanding of genetics —how we know it or how it interfaces with the society— and its application in medicine and science has changed during the last two decades. The development of genetic engineering —the process of adding DNA to an organism— makes that genetics is not only about the study of genomics, genes and genes action but is as well, a tool to integrate natural life elements to the architectonic development, among others.

Looking at nature for inspiration and blending advances in molecular biology and genetic bioengineering Estévez created the Genetic Barcelona Project, an interdisciplinary research which involves geneticists, nature and architects. Deeply connected with the Genetic Architecture Office the Genetic Barcelona Project incorporates biological processes and explores the creation of bioluminescent plants by adding the gene for bioluminescent protein into the DNA of the trees. The result is the creation of an energy which produces no harmful waste and is changing the definition of conventional processes of design to provoke reflection on society about how to built and illuminate cities more ecologically. 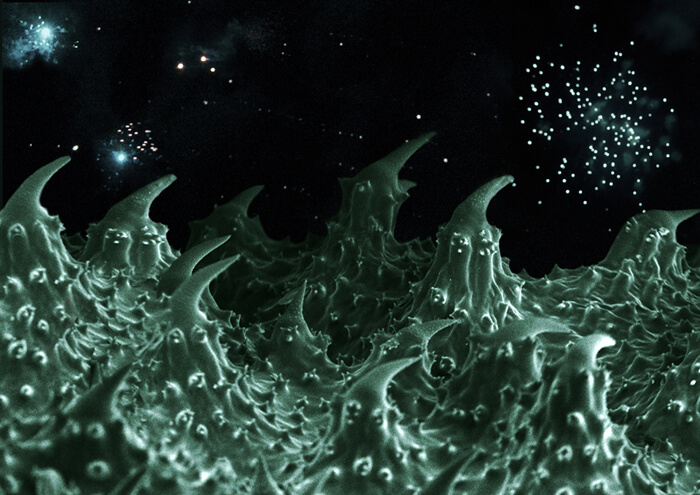 Your are an architect working in the intersection of architecture and science, when and how did the fascination with genetics come about?

Well, perhaps it may have to do that from the age of 10 I wanted to become a scientist biologist, to work with microscopes, etc. Of course, before, since age 7, I wanted to be an architect: what dilemma!, hahaha… So finally, you see, perhaps because my latent interests, I have finished being an architect who has created a genetics lab, who leads geneticists to architectural objectives, who works with electron microscopy, but who creates architecture.

Although, more specifically, I must say that between December 1999 and January 2000 there was one of those typical “informative balls”, where the media was increasingly publishing on an issue, “infecting” each other, encouraged seeing others talk about it. Only that in this case it was about genetics: press, radio and television were very quickly invaded by news and reports on genetics.

Then, watching how genetics offered such a huge field in the world of health and nutrition, I asked myself about the application of genetics also to architecture. So for that I created then -now already more than 15 years ago- a research group (the Genetic Architectures Research Group), a master’s degree (today called Biodigital Architecture Master’s Degree) and a PhD Program.

After fifteen years of working in biodigital architecture and genetics, what are you currently most excited about Genetic Barcelona Project? What directions do you imagine taking your work in?

Hopefully someone reading these letters wants to participate in the historical milestones that we propose with genetics, and which are to come. We are as when Christopher Columbus was seeking funding for the trip. Until Isabel, the Spanish queen -as was said, becoming legend- was fascinated by the project and became personally involved with her jewels, in what would become nothing less than the discovery of America. This greatly changed the world, as if we could get reality the genetic architecture goals that after all are looking to tap the enormous potential offered by nature, to ensure the sustainability and future of our blue planet.

For example, we have already opened three ways of bioluminescence in order to get drastically a reduction of energy consumption of night lighting and its consequent pollution. Although the shortage of funds has left us only do some surveys, but not to walk the whole way. As years ago we are on the threshold of a fourth way, which can be much more effective. And, what’s at the end of the road? The satisfaction of three of the most basic human needs solved in the most natural and sustainable way: natural light, heat and habitat, living, without energy consumption and pollution, fueled by the ancestral power offered by nature, that humans are already in the possibility of channelling it thanks to the advances of genetics.

Trees and plants in the streets and homes that offer naturally light and heat. Living houses, purchased in malls, which can be planted in the ground and that grow alone. It opens an unexplored infinite horizon, fascinating, a whole new world to come.

Your work challenges the definition of architecture, how do you visualize the city of the future?

As a soft and furry city (hairy): a living city. A city that takes every advantage that nature teaches us, how open book, billion years ago. The city of the future will be of 50% biological technology and of 50% digital technology (100% biodigital). Living houses that grow alone, trees that give light at night, plants that give warmth in winter: a city that seems more a forest that a containers landscape of a port. After all, where we prefer to live, in boxes or in trees? We must end with the city-countryside dichotomy: like a dirty oil stain, our cities are destroying nature wherever they grow. But we must be able to get that every human footprint becomes creator of life.

Well, I have no enemies of my creativity… Anyway, like everyone else, we have obstacles to greater deployment of creativity. As the limitations that come from be humans: from, for example (something very strange in fact), that we need sleep, even our personal imperfections.

And time is so limited, and goes so fast. And we have to spend to so many things simultaneously. Perhaps others would have enemies of their own creativity, as can be -paradoxically- its own complacency, their vanity, their ego, all for ignoring and not recognising their own limitations, their mental myopia, their shortsightedness, their neuronal rigidity… But, yes, we all equally affect mainly not being able to dedicate ourselves more to create.